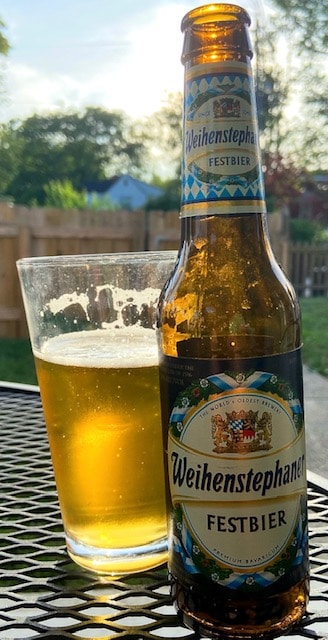 Poured into the Tücher Weizen glass (not pictured, rather the picture shown is from 08/15/21) , the color is alarmingly light for the style. (BTW – here’s the explanation for the hue which comes six years after my original notes on this beer).

The pour is largely a macro yellow color and lacks the kind of extra added orange, amber depth that one would expect to find in a Marzen. Strike one.

There is some nice carbonation with plenty of streaming bubbles and some decent head, but the lace and retention are only average.

Tastes are a little corny and little too sweet, malt liquor-like for my liking. It lacks much depth or character and there is a distinct absence of those high quality sweet malts that one would normally expect from the style. I need a touch more Bock-like notes (greater and higher quality malt depth) – once again, see this. Having said that I quite enjoyed drinking it, BUT I think that was because I was really craving a beer when I drank it.

Very surprised to be so disappointed in this. It wasn’t “bad” as such, but I was looking for much more malt depth and a darker color.