More than a decade removed, Todd and beeradvocate.com are still banning! 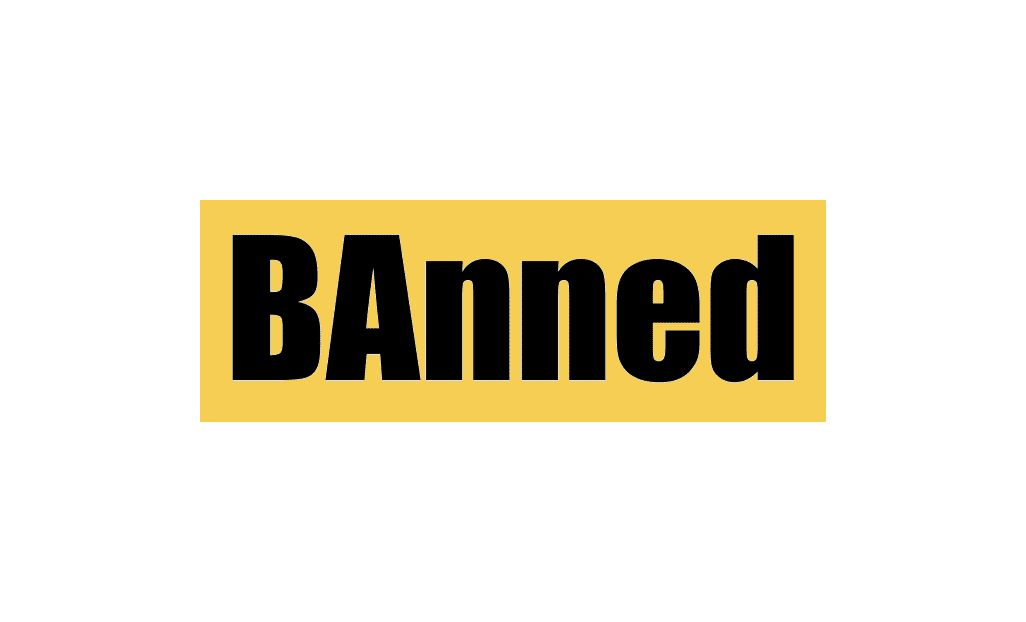 On 3/31/22 the official Beeradvocate Twitter account manned by Todd Alström, blocked the newly minted dingsbeerblog Twitter account. Yep, it’s true. Quick, to the DeLorean! Todd blocked my other Twitter account years ago, but the latest action was implemented at record speed – the new DBB account has only been active for a few days – I’m so glad he still thinks of me after all of these years. It’s heartwarming; a plimsoll line of consistency if you will.

As a result of that action by Todd, about a month ago I began to conduct an experiment. I created a new BA account, out in the open (my username was Dingsbeerblog), and I posted in a few threads. During the experiment I had three posts (and two threads) deleted. Today, my final thread (that asked BA to delete my account) resulted in me being banned again*. Spectacular!

*It seems as though the account doesn’t get completely wiped out or deleted, and I assume this is a way that they can inflate user numbers for marketing/$ purposes, but still leave people without access.

The three posts that were deleted included two where I linked back to this blog (both were highly relevant to the conversation), and one where another BA had said that he thought that some of his reviews had gone missing. In my reply there, I suggested that if he cared about his reviews that he ought to scrape them from the site and back them up himself since there have been so many purges where people’s reviews have been wiped out by the paranoid folk at BA. The threads that were deleted were ones that asked for a definition of ‘self-promotion’, and one where I asked where in their ‘Code of Conduct’ linking to external sites was banned.

I never, ever forget being wronged. I see such events in the way that insurance is supposed to work. If one suffers a loss through the incorrect actions of another person, then the wrong can never be requited until one is ‘made whole’. The status quo needs to be restored; things need to be put back into their rightful place.

It’s coming up on eleven years since my beeradvocate.com account was first terminated without explanation. I haven’t thought about it much for more than ten years, but recent events inevitably caused me to reflect upon it a little once more. Ding’s Beer Blog would never have existed if it weren’t for my original expulsion from BA, and the revamping of the site in the last year has brought a whole bunch of old thoughts to the surface, and this is just another. Having said that, BA is now such a distant memory, that it feels very different than it did at the time, eleven years ago.

With one relatively small exception I was ‘made whole’ after my expulsion from BA. I managed (with the help of levifunk) to retrieve all of my 2643 beer reviews that had been uploaded to the site as of May of 2011, and all but a few of my place reviews. My forum posts obviously were lost, and the Bros. continue to hypocritically use a number of photographs that I had contributed over the years such as the Cuvée De Ranke photo. All of that aside, I got out (and off) largely unscathed; there were others that lost a LOT more in terms of content that they had contributed during the other, well-documented maniacal purges.

I suppose it’s possible that some people reading this will have absolutely no idea what any of this is about. For the full story you can read this, but here’s the potted version. After around eight years of contributing to beeradvocate.com between January 2004 and 2011, Candice Alström turned up. That’s it. That’s really the sum of what happened. Candice is married to Todd Alström, co-founder of beeradvocate.com. I’ve never met the woman so I cannot comment on her character, or frankly anything regarding her general demeanor in real life (I’ll leave that to others that have made her acquaintance), but what I will say is this. She apparently has/had an extremely assertive and sensitive personality when it comes to online interactions, I mean, consider her own Twitter account. Yes, I know that some people are now literally laughing out loud as they (quite rightly) recognize the exact the same traits in me. It’s a fair observation. In one regard, Mrs. Alström and I are really rather similar. And therein was the problem. 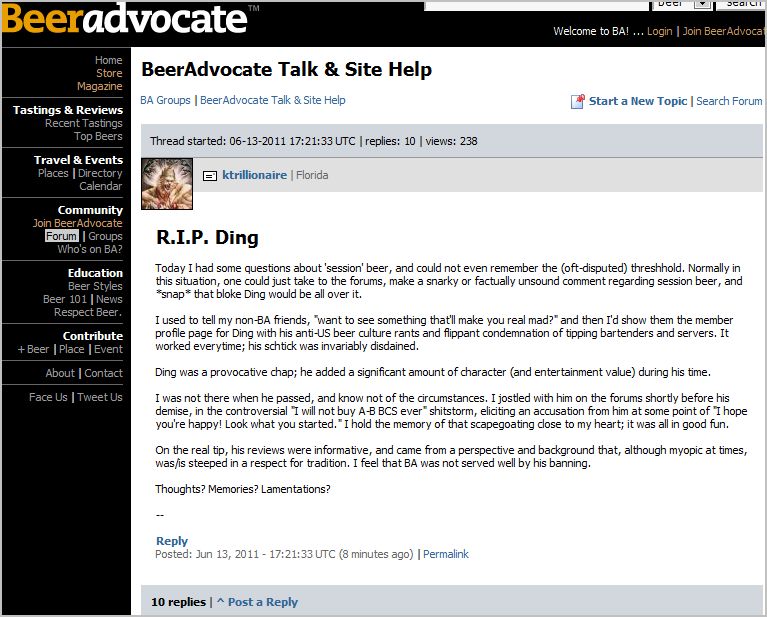 Where I (and others like me) were always willing to go back and forth with banter, cutting and thrusting through arguments and interesting debate, she wasn’t. She apparently saw strong personalities on BA as a threat. More specifically, a threat to her. I don’t have a clue what the basis for that was, after all she was married to the guy that ran the bloody website! How on earth could the vocal BA’s like me be a threat to the power that she so obviously desperately craved? I have no idea. This was borne out in so many of the exchanges that she and Todd had with umpteen well-established, more ‘senior’ BAs at the time (see this or this or this or this or this or this or this or this … I could go on). Her behavior was bizarre. In short, the vast majority of conflict and problems at BA were caused by her cataclysmic reactions that were coupled with Todd’s tremendously insecure behavior cataloged (in part) in the links above. In my case, I objected to her calling for a boycott of the Royal Wedding since the Royals had decided that beer shouldn’t be served at their wedding. Yes, THAT was the disagreement that got be banned! Of course, it’s their site, and they can do whatever they like, but the wanton disregard for the effort that people had put in to make the site what it was, and the discarding of thousands of reviews that had real value to people, shows a cruel, truly mean and unpleasant character trait. For all of my assertiveness, I would never have dreamed of acting in such an uncaring and rapacious manner. They did. That’s apparently who they are.

Nothing I ever said on BA was ‘for effect’. It was all true, and it was all written with a passion, and a deep sincerity. It all holds true to me to this day. I’ve not changed any of my positions on session beer’s correct ABV, the absurdity of tipping culture, the abuse of beer (especially cask) tradition in the USA, and the lack of a characterful beer culture on these shores. Nothing has changed since 2004. I stand by it all.

So what of BA and me now? As is often the case, one doesn’t necessarily fully appreciate the serendipity of an event at the time that it occurs. Leaving BA was a blessing in disguise for me. I got to express myself in a whole new way here at DBB, and as the inevitable gulf between old-school and new-school BAs grew with each passing milkshake IPA, I would have only become increasingly frustrated. In short, even though it didn’t seem that way at the time, I was much better off out of the fray. BA as a community lost more than I did when I left. I still am not offended by Clown Shoes labels, I still appeared at #8 on the most vocal BA’s list in one of the earliest magazines, I still remain a loyal British subject, and I still know that British beer and pub culture rule the high seas. And (for now at least, get over there quickly it will probably be gone by the time you read this) you can even read my 2009 thoughts on cask on the site itself – they obviously forgot about that particular contribution. Of course, putting me aside for a minute, the site has always been run like a douchebag shitstorm as evidenced by this single incident – I could give you a hundred other examples (like this one) of total fucking incompetence, but all that you need to know is in that 2020/2012-13 example above, that the Bros. reaction to reddit user beeradvocatehaxored was to ban him from BA! Fucking typical.

I am glad that Todd and others are still thinking of me, with the most recent references to me on BA prior to my latest experiment being early in 2022, eleven years after my departure, and as evidenced below. Anyway, perhaps Todd, me, and all of the old, banned BAs will sit down and have a beer together one day. I’d like that, but probably best to leave Mrs. Alström at home. 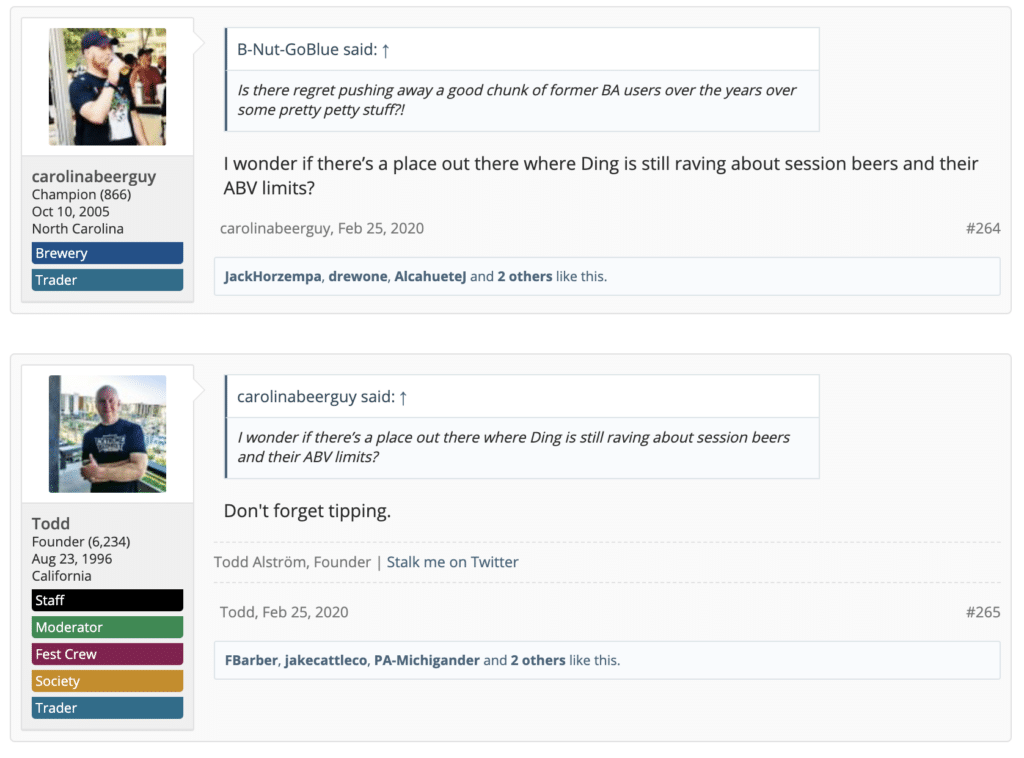