Hilton Head Brewing Co., 2014 – Light at the end of a VERY dark tunnel 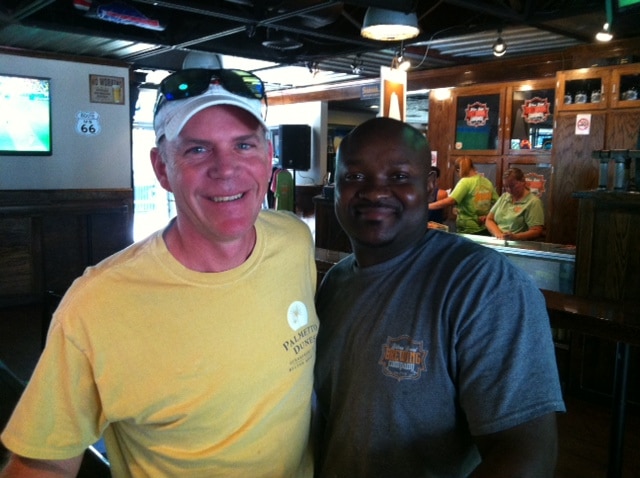 Each year since 2001, often as a result of multiple visits, I have been reviewing and writing about the catastrophe that HHBCo. has become over the years. During that 13 year period, I have probably visited the island and HHBCo. in excess of 20 times, and a pretty extensive list of my previous thoughts can be seen here – you should read that post first. 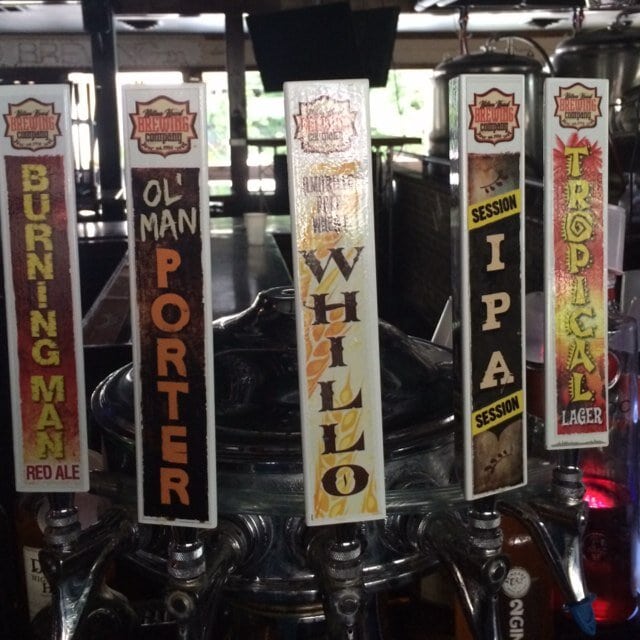 You’ll see from what I have written earlier, that for well in excess of decade, HHBCo. has been a shambles, both in terms of the beer and the facility. OK, so fast forward to my most recent visit to the island in the first week of July, 2014.

The first disaster that awaited me on my arrival to the island was the closure of Growlers, the beer and growler store. This is a HUGE blow to the island and a horrible, backward step. It leaves the massive new Kroger, Publix and Harris Teeter as your options, with the usual complete and utter shambles that both Rollers and O’Reilly’s are in terms of beer. I say it’s a huge shame since now you really are limited to what I would call pretty mainstream ‘craft’, whereas at Growlers you used to really have the feel of a ‘proper’ beer store, with the possibilities of some nice seasonals, a few one-offs and the odd special beer. Reports suggest that the owner of Growlers just didn’t fancy renewing his lease, and since he has a liquor and wine business almost adjacent to the growler store, and with the threat of the brand new Kroger becoming a beer and growler destination (which has not yet occurred), he thought that he would simply go back to concentrating on that – damn! Even if his heart wasn’t in beer, it still made my beer life better when Growlers was open. Massive loss for beer on the island, but as one door slams firmly in my face, maybe another is about to shed some more light.

Anyway, back to HHBCo. As per usual, I spent two or three early afternoon sessions in The Lodge, even buying a couple of Mexican Cake bottles (the draught ran out the night before I arrived). As I sat in The Lodge on the first three days, I toyed with the idea of walking the maybe ten strides from the door of the bar to HHBCo, but on those three occasions, based upon my extensive recent experience, I concluded that it would be a waste of my time, so I passed. That brought me to Thursday, where once again I was in The Lodge but this time waiting for my wife to join me for dinner at One Hot Mama’s. The Lodge seemed unusually quiet, and after spending well over an hour in there I decided to nip into HHBCo. since it would only be for about 30 minutes, and curiosity had gotten the better of me. Off I went.

At first glance it seemed as thought nothing had changed. The same dingy, club like interior, the same DJ booth and the same bar and surroundings but curiously I did notice a new design on their growlers – maybe something was different? Well, they were carrying some external beer to start – Blue Moon and Stone Enjoy were a couple that I noted – but low and behold they DID have five of their own beers on! Hooray (or maybe not)!

OK. Deep breath, what do we have? A ‘Tropical Lager’, a ‘Filtered Wheat’, an ‘IPA’, a ‘Porter’ and a ‘Red’. I plumped for the IPA and was then consequently told that it was a ‘Session IPA’ at 5.1% – G-R-O-A-N! Despite all of the problems that I have with that moniker, my mood changed when the beer arrived.

It was served in a nice glass and the beer looked really good. Now, I’ll say right off the bat that the Session IPA suffered from exactly the same issues that all beer of this type does – very hoppy in the nose and tastes, without the malt backbone to support it, that leads to a relatively watery, hop juice feel. Having said that, and despite my general dislike of this type of beer, it DID mirror a bunch of beers in the same category (I ABSOLUTELY refuse to call this a ‘style’ – it isn’t). Had I closed my eyes I really feel as though this could have been a beer very similar to Stone Go To, Founders All Day or any of those other beers – even though I didn’t like it per se, in that respect it was ‘good’. In fact, it was on the strength of the competence and authentic nature of that beer (even though I’d never drink it ever again), that I decided to order the sampler to investigate a little more.

The four other beers were served in a nice flight, and all seemed pretty solid and well made. 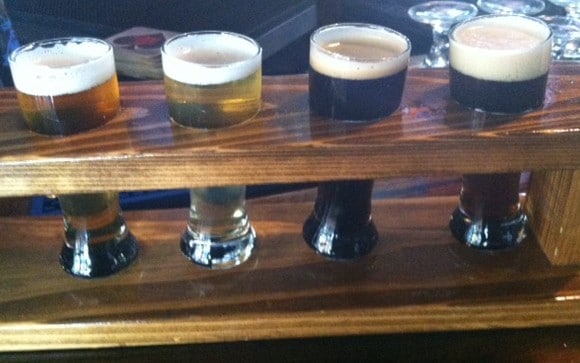 This was a HUGE change compared to recent years and it certainly got my attention. As my brief stop neared an end, I tweeted about the stupidity of the Session IPA and its ABV, but I left in a much different frame of mind than I though I might. Something is happening at HHBCo., and I was about to find out exactly what that was!

Earlier in the day I had tweeted about a potential problem with a pint of Dead Arm Pale Ale from Coast Brewing that had been poured at The Lodge. That tweet turned out to be a blessing in disguise. John Rybicki had been doing some work with Coast that afternoon, and had seen my tweet and subsequently shot me an email. Who is John Rybicki? A fair question. John is a Hilton Head resident who has been a part of the beer scene and homebrewing crowd in the low country for some time. He was the original brewer at River Dog in Ridgeland, SC before a difference of opinion had him leave soon after the beginning of that project. John is someone who I had met a couple times before, for bottle shares at The Lodge when I was visiting the island previously. It so happens that John is also the new Head Brewer and man in charge of beer at HHBCo.! This was a revelation to me and we agreed to meet, albeit briefly the next day at HHBCo.

John and I caught up the next day where I had more time to talk to him about the beer and to have a proper tasting. In a nutshell he has been working at the brewery for just over a year, starting with an overhaul of the equipment to turn it from a haphazard extract mess, to a proper, fully functioning, all grain set up that is producing some really nice beer. 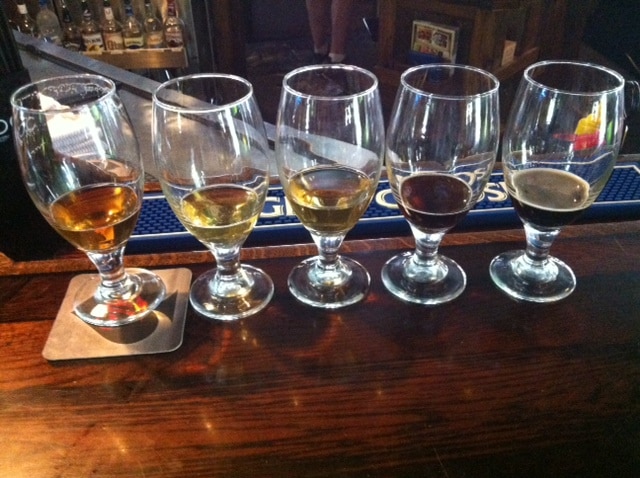 The Red (Burning Man) and the Porter (Ol’ Man) were my favorites (both were growler fills for me), but the other three beers were equally as clean, well made and solid in terms of their appearance, drinkability and style notes. John is under NO illusions about the depths of despair that HHBCo. has been mired in over the last decade, and he constantly referred to ‘digging out of a hole’. After just over a year, he is of the opinion that the beer at HHBCo. is worth checking out, again, and I am inclined to agree with him. He’s proud of the progress that has been made, and is ready to invite some serious critiquing.

John knows what he’s doing, and the strides that have been made here in the last 12 months are incredible. If you have no knowledge of what was going on before you might not be blown away, but the progress is staggering. 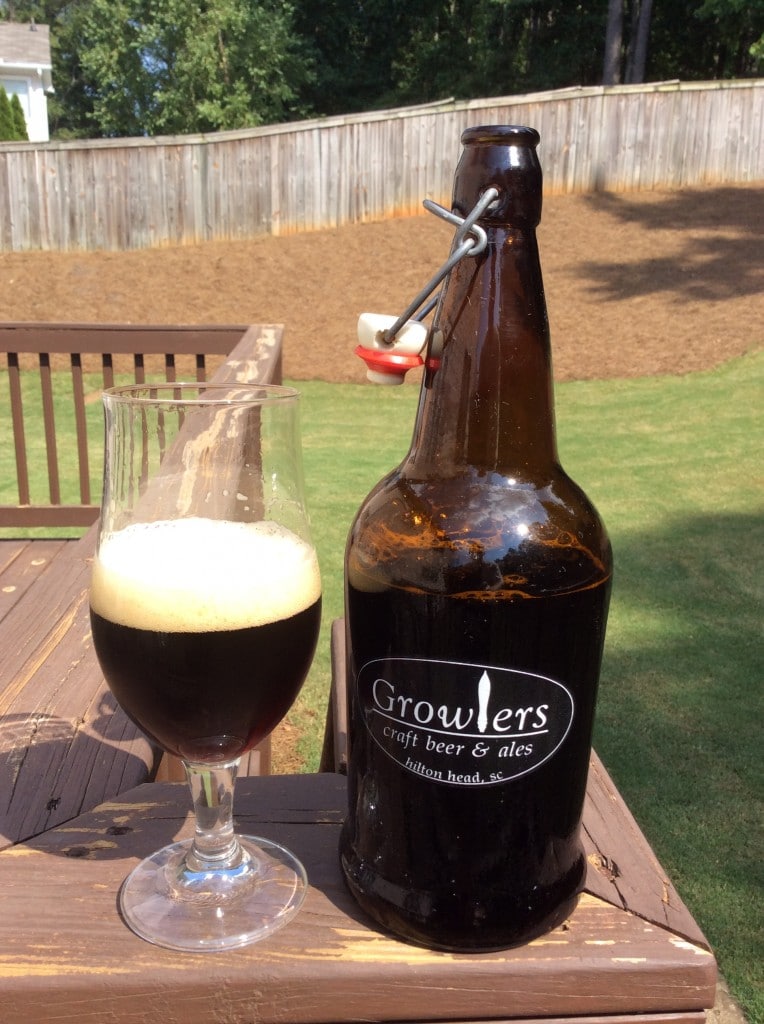 In summary HHBCo. has a real chance with John at the helm and Juan backing him. They still have a mountain of work to do (such as actually putting a note about their BEER on their web site and not filling growlers like pint glasses without the tube), but John has things moving in the right direction – any beer lovers that visit the island need to give him a chance.

John is planning a DIPA for the 20th Anniversary, and that shows that he is now ready to move from the foundation that he has built, to more advanced things. John has done everything right so far, by clearing the decks and starting from scratch. HHBCo. is now ‘one to watch’, but not for any super-hyped reason, just because it has a chance to be a brewery that can produce some much needed, competent, tasty, local beer, in a setting that is crying out for such a thing. Good luck John, I’ll be watching closely & see you shortly!