So here I am, on the morning of another Atlanta Cask Ale Tasting (#ACAT), but this time I am not getting ready to head to the event later in the day. The #ACAT of 2014 will be the first one that I have not attended since the inaugural gathering. The reasons for my decision not to attend today, are outlined in this post that I wrote on this same morning, 12 months ago. I vowed not to return in 2014 and I am good to my word.

The post from 12 months ago summed up the whole situation for me then, but this years event brings with it some irony. In 2014 there seems to be more, traditional British casks* than ever before, so 2014 probably represents the #ACAT that I would have been most pleased with.  However, despite that, I remain steadfast and principled, and my decision leaves me at great peace.

*I say that, but when one looks at the list, there’s a LOT of beer that although I assume will be undefiled, still sits at ABV’s that are WAY above what showcases cask well, and is from breweries like Thornbridge who, in a number of instances, are FAR from ‘traditional’. I’m certainly not missing out on any, subtle, REAL @sessionbeer!

I honestly hadn’t given #ACAT another thought until about two weeks ago when a few tweets and emails came my way. Below is one of the conversations that I had on Twitter with my friend @Carny93. Like the post from a year ago that sums up my position from this time last year, the conversation below sums up my position right now. 11 beers from the UK, presumably not defiled in any way whatsoever, are not going to allow me to compromise my principles in relation to the abuse of cask ale that #ACAT has supported in the past. I just won’t do it. As I say below, my principles override my hedonism. 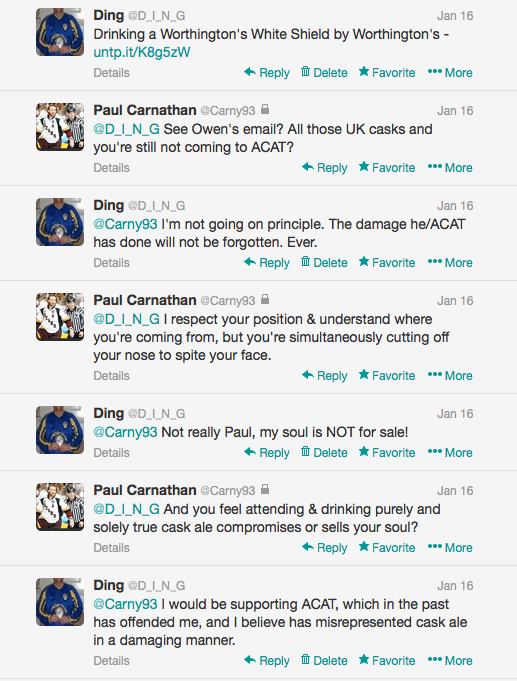 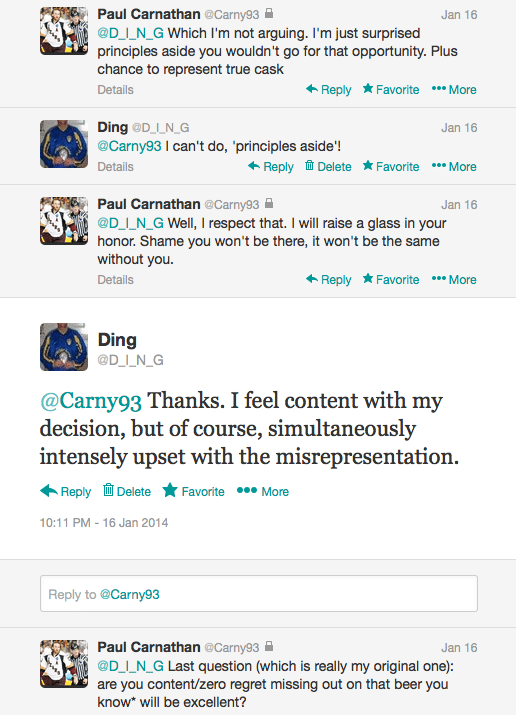 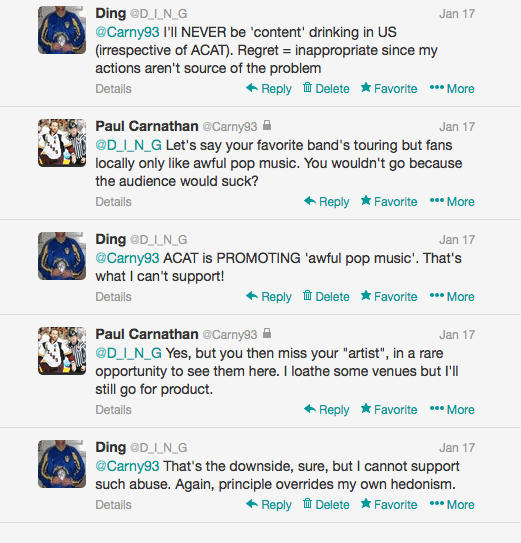 A little later, @robsterowski sent me the tweet below, suggesting things are ‘looking up’ (the link in his tweet points to this).

I followed up with a number of tweets to @Ilkleybrewery to ask them what their thoughts on the previous abuse of cask ale at #ACAT, is. Unsurprisingly, I got no response. If I were a traditional, English brewer, I would not be sending MY cask ale to #ACAT, as I would not want to be associated with a gathering that allowed a brewer to put Hostess Cup Cakes in a firkin, and call it real/cask ale. I don’t pretend to know what Michael Jackson would think of this, but I have a pretty strong feeling about how he, and others like him, would rank this practice.

Finally @NateDawg27 chimed in and I repeated what I had said before about knowing/assuming that Ilkley (and the others from the UK), would presumably not be abusing their casks with Walmart purchased ‘confection’ like the Americans, but that even so, I simply cannot support the event, even if it means on missing out on some really good beer. The principle is that important to me, and in any case, how on earth can I, with a straight-face, square the juxtaposition of artisanal beer with ‘beer’ infused with this? SERIOUSLY? 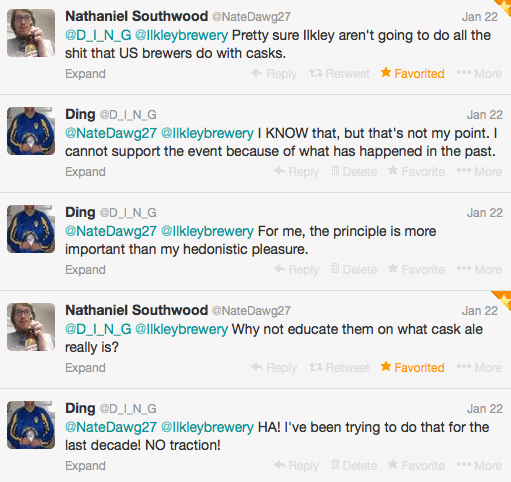 2013 was the year that cask ale in Atlanta died for me, and this years line up does nothing to resurrect it.