If you are interested in beer and live in the USA, you’ll know that The Bruery’s Partridge In A Pear Tree is a beer that has provoked a whole bunch of that typical, American beer geek hysteria that I hate so much. It’s a beer that I thought of much as I prepared to write this post. At the end of the post, perhaps you’ll see why.

In 2009 an American, anglophile colleague of mine here in Atlanta, GA, gave me a hard-copy article from the NYT that was published in July of that year. He thought that I would be interested in it, and ostensibly he was absolutely correct. It was kind of him to think of me and I was interested to see what it was all about. However, my mood changed dramatically when I unfolded the paper and saw the beautiful picture and first few lines of Henry Shukman’s text. It was a piece from the travel section about pubs in the Cotswolds, and my state of mind at that time would not allow me to read the article – LITERALLY. I was so homesick in terms of English beer and pub culture that I knew that if I did read it I would get so upset that I would feel even more depressed about my beer plight than I already did. As a result the paper got filed in the office.

Fast forward to late October of 2011, over two years later, and a couple of nights before I was about to leave for my first trip home to England in over four years. I finally got up enough courage up to sit down and read the article. I felt that reading the article a couple of days before I would be back in England, in a pub, I would be able to cope with the emotional wrench that the article was bound to provoke in me. I was right (just), and it was a great read. As I reveled in the graphic descriptions of pubs in one of the most beautiful parts of England, little did I know quite how profound the experience was about to become.

A great friend of my who lives in Wendover in Buckinghamshire had offered to take me on a brewery tour during my visit home. His initial plan was to take me to either The Chiltern Brewery or The Vale Brewery or The Tring Brewery since they are all very close to this house. However, none of those breweries offered tours on the day or time that I was going to be visiting so a new plan had to be hatched. Totally unbeknown to me, he decided that I should take advantage of the tremendous public transport system in the UK, and take a combination of trains from West Ruislip, to High Wycombe, to Banbury, in order for him to pick me up and drive to The Hook Norton Brewery at Hook Norton in Oxfordshire. Prior to my arrival in the UK, I had no idea that we would be visiting that particular brewery.

We arrived a little early for the 2.00 PM tour, so naturally enough decided to have a couple of pints (before going on to the brewery) at the pub at the bottom on the lane where the brewery is situated, literally a few hundred yards from where the beer is made. 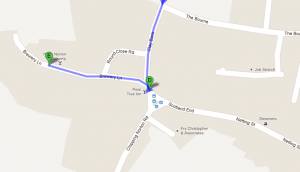 Hook Norton Brewery owns around 40-50 pubs, and obviously enough their flagship pub is the one that sits on the doorstep of the brewery. That pub is called The Pear Tree Inn, and it perfectly encapsulates the quintessential English pub, sitting on a village green, with low ceilings, an open fireplace, some grisly locals and some wonderfully kept cask ale. Absolutely perfect. 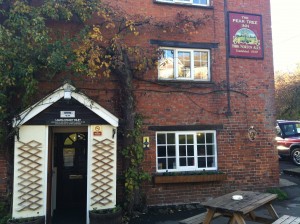 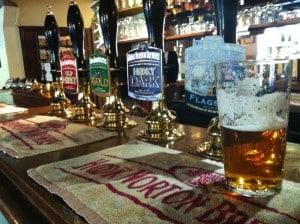 A magnificent tour of the incredibly antiquated and charming brewery followed, with the equally charming Malcolm as our guide, and of course this was followed by tastings in the bar on site. Tremendous! 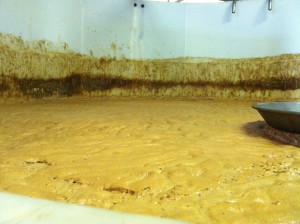 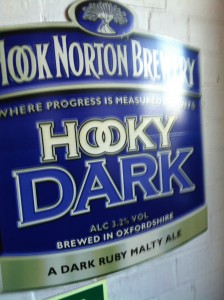 You’ve almost certainly worked out what’s going on here, but just in case you haven’t, and to see why this whole experience was absolutely incredible and the wonderful coincidence that unfolded before my very eyes, here is the original article. I can now read it in a completely different light! Gentle tears of joy were shed and in no small part because the fuss over a single beer like Partridge In A Pear Tree pales into TOTAL insignificance when compared to the spiritual experience of being at The Pear Tree Inn in Hook Norton in Oxfordshire in the circumstances that I found myself. Truly moving.