Usually I don’t like to review beers in batches, but on this occasion it seemed a little more appropriate for more than one reason. My friend from North Carolina/Yorkshire, Stuart Arnold (of Fortnight Brewing, check ’em out), provided me with this opportunity to hit three organic beers from Caerphilly in Wales.

Apparently the Celt Experience Brewery has been operating for a few years and produces organic beer. 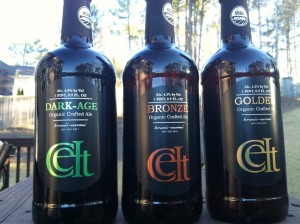 It’s always a huge thrill for me to get a chance to drink relatively low ABV beer, from a brewery in the UK, and in styles that I miss so much, so by definition this is an exciting little soiree for me. Of course, those things in and of themselves are no guarantees of quality or good taste, but they certainly represent a solid foundation for a set of beers that I am likely to enjoy and appreciate. Either way, to get a few 4-5% beers in these styles, still makes me very happy – thanks, Stu! 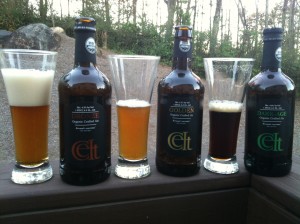 Stu included Golden, Dark-Age and Bronze. Golden is a 4.2% Golden Ale (I have a bit of a problem with that moniker but that’s another story), Dark-Age is a 4.0% Dark Mild Ale (I always feel the work Dark is redundant, and that’s ANOTHER story) and Bronze is a 4.5% English Bitter (We’ll see!). 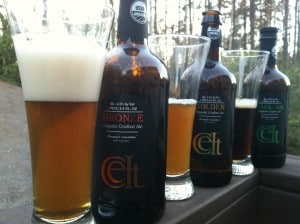 Obviously the first thing that strikes you is the presentation. I am a fan of foiled necks, but I am also conscience of the fact that this kind of extra care and attention in presentation is likely to significantly add to the cost. In reality it turns out not to be foil at all, but rather thin, black matt, plastic. I have no problem with the fancier packaging per se, but am hopeful that the beer itself lives up the slightly elevated status.

Each bottle comes with the Organic USDA status prominently displayed on the neck.

I started with Golden.

The pour is a dull golden color with a significant amount of haze. The head is reminiscent of a great, British cask ale with large bubbles and a thinnish layer of light foam. The lace it produces is very nice, if not incredibly extensive. 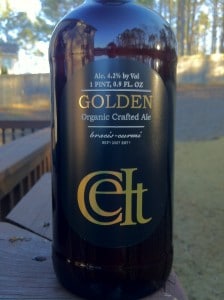 The nose offers some very simple, leafy green hop notes. That phrase might have US readers might thinking about fresh, green, wet-hopped beers, and of course that is not what I am talking about at ALL. It (appropriately) is more of an organic, grassy or hay-like feel and it feels much less aggressive than an American, wet-hopped offering. 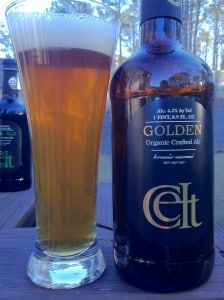 The first impressions are that of quite a sweet beer. There is very little bitterness here at all. Replacing the potential bitter elements are balanced malts and a simple

The finish introduces a few drier, less rounded notes and hay element does repeat itself. 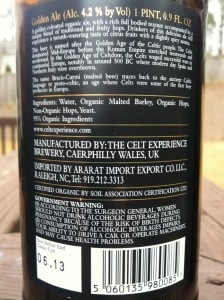 Whilst this is not necessarily what one would call a typical, English bitter (which is good, because as a ‘Golden Ale’ it really isn’t supposed to be), it absolutely DOES showcase how huge amounts of flavor can be packed into beers of (by US standards) minimal ABV. It seems drier than most classic examples, and it definitely has a ‘grassier’ element than most, which is typical of many organic beers.

The next beer was Dark-Age.

The first striking impression here is the head. It’s much richer, denser and well formed than I was expecting. It’s almost stout like it terms of its density, retention and the lace it produces. The lace pattern left on the glass is better than expected. Impressive. 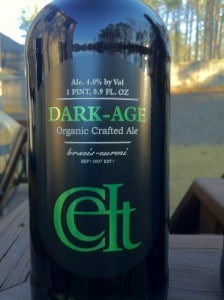 Again some sweetness hits the palate first. As expected, the whole experience is a subtle, understated one – GOOD! Again, and paradoxically, the beer comes with some unexpected dry character that I wasn’t expecting. Typical Mild elements as the malts keep coming to the fore, and the beer takes on the feel of sipping it in an old time, broken down Snug, in a boozer in Stoke-on-Trent. For some reason I always associate milds with that part of the world – odd, isn’t it?

Dark-Age is a gentle beer with much to commend it. There are tasty light elements of roasted, light licorice and some tantalizingly, small smoke bursts in addition, but of course, as it should be, it’s all understated and classy. 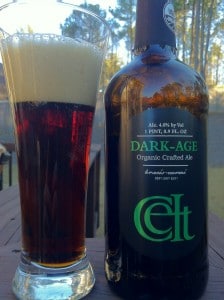 To be honest, it’s so refreshing (and unusual) for me to get a beer in this style and ABV that even if it’s not fantastic I tend to think that it is. I’m suffering a little from some rose-tinted spectacles, but I think I can objectively say that Dark-Age is well above average. 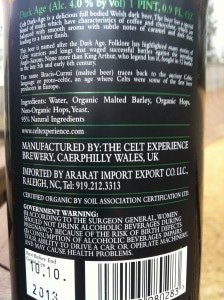 The lightest and wispiest pour, but a lovely color of light, shiny copper. 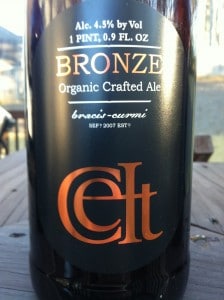 Once again the beer comes with a surprisingly dry element, but this holds off until much later in the bottle than the other two. The tastes also begin to resemble what I would call a more classical, English beer. 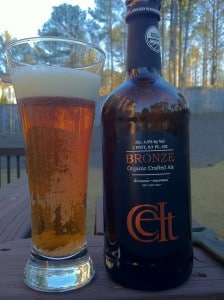 There is a moreish, biscuit malt element that is more forward than in Golden. There’s a residual sweetness than lingers a bit, and this seems a touch unusual. The hop finish is longer than I was expecting – it lingers nicely. 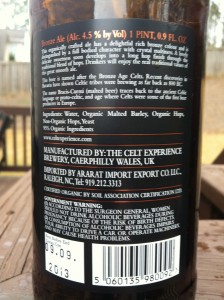 Bronze is a cleaner beer than Golden, not that the comparison is necessarily especially relevant, but when drinking all three beers in close proximately it is an observation that I want to make. Bronze feels more quintessentially ‘English Bitter/Pale Ale’ to me, and this is reflected in my preference for it. Simple hop profiles, supported by robust malts in small ABV packages are next to impossible to find in the US, so I admit that my judgement may be slightly clouded here, but even after carefully considering that I would consider Bronze to be a very nice example. 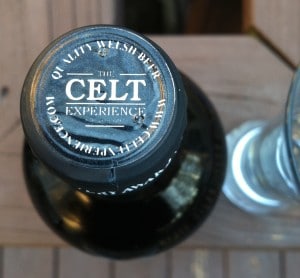 In the final analysis for me, Bronze over Dark-Age over Golden. Different styles, different approaches, different degrees of success, but all extremely enjoyable and solid examples of good British brewing.