In my beeradvocate days, before the unforgivable debacle, I took pride in reviewing just about every beer venue that I traveled to. My view at the time was that I was doing the web site and community a huge favor by adding to the database, and giving information about the various places that I passed through on my travels. Pictures were taken if they were missing from the database, and I was pleased to have close to 300 reviews in my time over there (of course, the pictures are still being used by BA). Like my beer reviews, I managed to retrieve all but a few of them from Google’s cache, but since then I have been less studious about writing up all of the new places that I have visited. I thought that should begin to change, and I hope to get back to reviewing some of the missing venues or perhaps re-reviewing some of the old haunts to bring the reviews a little more up to date.

So, that brings me to a recent Twitter conversation, and some newer venues in and around Atlanta.

Several months ago when the Moondog Growler store in Marietta opened, I purchased their Groupon promotion and went up there. It’s a little out of my way, but I can justify a  longer route home if the beer is worth it. I purchased a couple of their growlers and noted at the time that I thought it to be VERY expensive. Ho hum, not much to worry about since I got my beer and had no real expectation of visit there on a regular basis, so I paid no more attention and I haven’t been back since. Then, a few weeks ago I noticed @Craft_suds making a fuss on Twitter about their prices. It culminated with the cost of Boulevard Double Wide being debated (it was coming in at approx. $23 for 64 oz) and the cost of Terrapin’s All American Pilsner equating to almost $28 per sixer! Well, those prices are quite frankly daylight robbery, but I guess that’s their business and who am I to say what they should you should not be charging? What was a little more interesting, was what came out of the conversation that the pricing question had initially provoked.

In short, it appears that after Moondog had established their premises in Marietta & Dunwoody, they made attempts to block growler sales from bars in nearby Sandy Springs, more specifically at The North River Tavern.  Essentially they wanted a different interpretation of the law than Sandy Springs had decided impose, so that their proposed, third store in Sandy Springs would not face competition. Here’s is a link to the letter that Eleanor of Moondog, wrote asking for a reversal of the decision.

In a nutshell, it seems that they were attempting to stifle competition (fair enough), but the subtext is that they were prepared to do that, despite the fact that their request would have the effect of rolling back progress on the local beer laws. Much more interesting to me, since again, in the interests of reducing the competition I would again say ‘fair enough’, other people don’t like this much. Beer folk tend to take the very common view that Karma and Cumbaya needs to be maintained between said folk. I take no such view, and while I don’t necessarily want to see people taking shots at one another for no apparent reason, this forced and mispaced Cumbaya has the effect of supressing crticism when criticism is ABSOLUTELY approrpiate and necessary. The idea that all beer folk should all get along, share all their secrets, not litigate (even when necessary) and should avoid criticism of one another even when their product is crappy, is utter nonsense to me. Anyway, a lot of people take a very different view to me, and the combination of the high prices and Moondog’s efforts to restrict competition seems to have upset them. In a least one case, a personal boycott is in place and Twitter accounts have been blocked.

Anyway, that all aside, I had an increasingly rare opportunity to head to the northern suburbs so thought that I should investigate Moondog’s (newer) Dunwoody location. What follows is a little review of the Nandina Lane store.

This store might be a little difficult to find for people that don’t know the area that well. If you do, it’s on that little road behind Dunkin’ Donuts that links the two main thoroughfares in Dunwoody. There is parking out front, but if it were a busy time it would fill up quickly and you could have an issue. 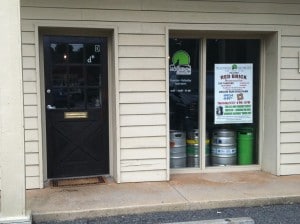 I have to admit, I really like the exterior look of the store, and indeed the interior – unusually for America, it has a little character! There is a relatively low ceiling in the building, which significantly adds to the atmosphere. Some low lighting, and a clean look to the store makes an inviting place. They have 40 taps, a few glasses for sale and curiously,  a couple of large tables and benches to the left of the bar. I was intrigued and asked the young man who was working what it was for. He informed me that you could purchase a flight, take a seat, and hang out. I was surprised. Apparently a ‘flight’ according to Moondog is three, 2 oz pours for (I *think*), $3.50! Both in terms of number of pours, their size and the price (if I am correct about that), this looks a little on the small and expensive side for a flight to me, but this would seem to be in line with their general, pricing policy! Either way, and interesting concept to sit in the store and chew the fat, but I bet it could get really busy, noisy and crowed pretty quickly. 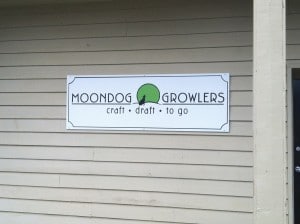 I actually went with the express intention of finding Fuller’s Bengal Lancer, but it was only at their Marietta location. The young man working was giving me (and the other gentleman in the store), a full explanation of both Fuller’s and Bengal Lancer. I wasn’t listening intently, but he seemed to have most of his facts right, but I didn’t have the heart to fill him in on my background. In any case, he was very enthusiastic, and it would have been churlish to do so. Since they didn’t have the Bengal Lancer, I opted to swap my 64 oz growler for a 32 oz one (I like the idea that you can swap one out for another without charge), and had him fill it with Bridgeport’s Witch Hunt. $6.41 for the privilege, it seems reasonable to me.

Some of Moondog’s beer is without doubt horrendously overpriced, but I like the feel of the Dunwoody location, was glad to see an enthusiastic and perhaps (I didn’t really quiz him to find out)  knowledgeable young man working there. I am not as offended as many by their apparently aggressive efforts to stifle growler sales at bars, so I can put that to one side.

Talk of boycotts brings me to my second visit of the day. As I was traveling further north for a meeting, I decided to visit AleYeah! in Roswell. I mention boycotts since I am currently (and have been for several months) boycotting AleYeah! in Decatur. That personal boycott is in place since they took a keg of the wonderfully subtle, tremendously delicate Cains Best Bitter, and abused it by putting through a Randall that I think had, amongst other things, rosemary in it! Of course, the specific contents of the Randall are 100% irrelevant, as any tampering with a beer that was once the CAMRA Champion Beer of Britain in 1991 in such a manner is unforgivable. I will never forget the disrespect and ignorance that they showed – NEVER.

I fully understand that some would say that me patronizing the Roswell store would be hypocritical, and there would be some truth in that, but I wanted to visit this location at least once. Having now done that, and given the unforgivable actions in Decatur, I strongly suspect this will be the one and only visit. 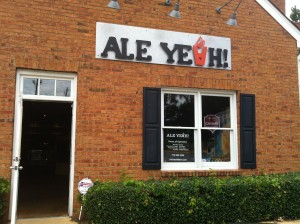 Anyway, a somewhat similar location to Moondog, Dunwoody in some ways (small, older shopping center with some parking but not a lot), and a similar sized store. Obviously there is a bit more room at AleYeah! since they have a large bottle selection as well as the growlers. They have 18 taps, and I went with 32 oz of Brooklyn Fiat Lux.

They gladly filled my ‘The Beer Growler, Avondale Estates‘, growler, and said they would be happy to fill any growler, and that if other stores in GA were refusing to do so, that they had absolutely no reason to refuse. Ironic, since I know after talking to a AleYeah! Decatur employee, that there has also been some friction between the Decatur store and The Beer Growler in Avondale Estates. I was glad of the willingness to fill any jug, since because of my personal boycott I had removed my AleYeah! branded growler from my truck.

The young man working in the store seemed knowledgeable (as the guy at Moondog did), but this employee was a little older, and less ‘gushing’ – I prefer the low key approach. I picked up a couple of bottles in the process, perused their glassware and took a quick look at the cheese cabinet. I also noted that they had some wine. Like the AleYeah! Decatur store things are organized by style, and there is a very good selection. Obviously it’s a little more expensive than say Green’s, but that’s understandable. My Brooklyn Fiat Lux was $8.99, which I think is about right.

Obviously two different stores with two different profiles in terms of what they sell. Glad that I went to both, but both have some fairly significant obstacles in terms of me bothering to revisit. The prices at Moondog is much less of a problem for me that the total, utter and unforgivable disrespect that the Decatur location of AleYeah! has exhibited. To me, that exposes a deep misunderstanding of beer and beer culture, and I doubt I’ll ever get over it. I would imagine that they care precisely ZERO % about that, but that only cements my position.