Approximately one year ago, maybe a little less, I first heard about a brewpub that was supposed to be opening in rural Georgia. The idea of a brewpub in such a location seemed fanciful and unbelievable enough (we’ve seen that fail before), and when someone told me that it was going to specialize in real ale, I immediately laughed out loud! So, around December 2011 when I first visited their facebook page, I was surprised to see that it was all true, and that significant progress had been made. 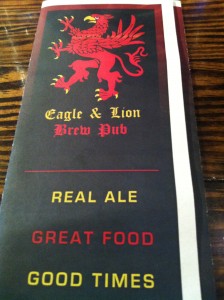 Since their opening in March of this year I have been asked (and encouraged & cajoled) by any number of people to visit The Eagle & Lion in Griffin, GA, and up until yesterday I had been wrestling with the mental demons that plague an Englishman who loves Real Ale who is marooned in the Real Ale desert that is the USA. I was concerned about the unhappiness and nostalgia that such a visit might stir in me, and was quite frankly avoiding the trip. So, as it turned out, I ultimately decided to go based on a split-second decision, and with no planning. This post is a reflection on my visit, and the bizarre and odd feelings that it stirred in me.

Firstly, Griffin, GA is an incredibly inconvenient location for me and frankly just about the whole of Atlanta! It is an approx. 45 mile, 1 hour drive from central Atlanta, about 1 hour 10 minutes from my place of work, and a 75 mile, close to 2 hour drive from where I live. Of course, there are ZERO public transport options. These practical considerations are part of a much greater ‘not-specific-to-this-venue’ source of massive frustration that I feel about beer in the USA, but that’s another post altogether.

Secondly, Griffin is a larger town than I was anticipating. Now, don’t get confused, it is STILL everything that you would expect, but just more of it!

The Eagle & Lion is situated a few blocks away from the center of town, in a slightly odd location. The frontage consists of a parking lot at ground level, and then the main building up a flight of stairs on the first level. There is small outside seating are that is OK, but looks out on to the the parking lot and the main road, and is probably no more than a smokers oasis! 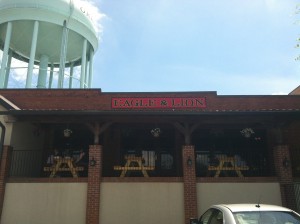 The building itself is a bit odd, since it is part of what looks like a small, office block (with an additional entrance to the brewpub though an internal, office corridor). Apparently it used to be a barbeque restaurant. Unfortunately there is virtually no atmosphere. It’s just what you would imagine a rural Georgia sports bar to be, with an enormous flat screen TV above the bar, other TV’s and a high, vacuous ceiling. I found it quite cold, and while spacious, it offered no sense of warmth or atmospheric comfort. This is NOT any kind of ‘pub’ atmosphere, but to be fair that’s almost certainly not what they are trying to achieve. 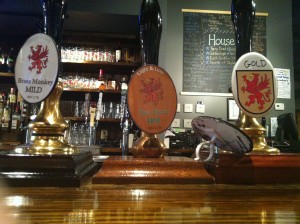 Pump Clips at The Eagle & Lion

Mark Broe is the brewmaster and is also either the part or full owner. Mark has experience of brewing in the UK. Here is what I have managed to ascertain, via a 45 second conversation with him, talking to the barman, doing some research, and putting my ear to the ground in other ways. If Mark would like to correct me on his biography, I would be more than happy to have his input!

Mark studied at Brewlab (formerly at the University of Sunderland, but now independent) in the UK, and brewed professionally in England at Grand Union Brewing in Hayes, Middlesex. He also worked at Atlanta Brewing Co. (Red Brick). Grand Union started in 2002 and went out of business in late 2007/early 2008. This period coincides when I was not living in the UK, so despite having lived very close to the area that Grand Union would have operated in, I had never heard of them or had any of their beers. It would appear from the literature at the Eagle & Lion that Grand Union’s Honey Porter won a SIBA silver award in 2006, and (apparently) in 2006 it looked like this! Outside of that, I really have no other information about GU beers other than what is reported on the Ratebeer and BeerAdvocate brewery pages. 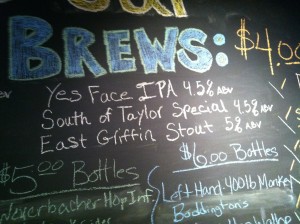 The chalkboards inside the bar boast six, real ales along with a modest, but decent bottle selection and a few drafts ranging from Bud Light to Southern Tier. The prices were very reasonable I thought (a function of being in Griffin, no doubt), with the brew pub beers being offered in 20 oz imperial pints, and in half-pints – I REALLY, REALLY love that! The beers advertised were as follows;

Tipsy Toad (3.7%) – described to me an English Bitter – the house session beer! NOT available on my visit! GGGRRRRRRR!

Golden Eagle Ale (4.2%) – The name suggests this might be one of the (relatively) new fangled ‘English golden ales’, but again it was not available so I did not inquire about it.

Brass Monkey (4.1%) – Described as a ‘mild’, I’m not sure I would categorize it that way, but nonetheless it was the better of the two beers that I drank, and I enjoyed it very much.

South of Taylor Special (4.5%) – It was described to me as a ‘Special bitter’, to which I replied ‘an ESB?’ to which the retort was ‘yes’. I don’t think this beer is supposed to be an ESB at all, rather I think it is more likely supposed to be a ‘Premium Bitter’.

East Griffin Stout (4.8% or 5.0% depending on which source you believe) – Again, I did not try it but hopefully leans on the English side of things rather than the American. 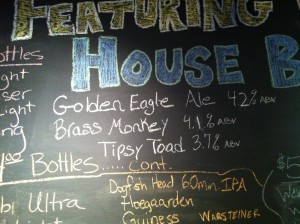 I had two half-pints of the Brass Monkey and a pint of the South of Taylor Special.

So what’s the beer like? Look, after drinking only two pints of beer I am certainly NOT going to start formal critiques of the stuff, not am I going to write up a review. I did make a few notes for myself, but the only way that I would be prepared to analyze it to a greater degree would be if I could go back time and time again over an extended period. However, what I will say is the following;

1. There were no obvious flaws, and the beer largely tasted as I would expect it to.

2. The South of Taylor Special was served far too cold. This was puzzling to me because the Brass Monkey seemed much better, and if they are being pulled from the same area, there should not be such a disparity. The serving sizes would make a difference, but it seemed more profound than that. 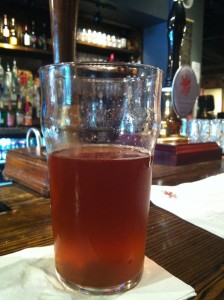 3. The Brass Monkey was my favorite of the two and offered some pleasing biscuit malt character, and a high drinkability.

Outside of that I’m simply not prepared to commit to anything deeper, since that would hardly to be fair to anyone on either the positive or the negative side of things.

The burger that I ate was definitely above average and the roll that it was served in was better than that – really good.

In the extremely brief conversation that we had, Mark told me that he has personal reasons for locating to Griffin, and they made perfect sense, but the choice of location for a beer specializing in Real Ale is still peculiar. The food that I ate was above average and the beer most definitely has plenty of potential to be both the real thing and very good and it may even turn out that The Eagle and Lion will be a long term, commercial success, but I cannot imagine that it will be on the back of real ale, no matter how good the beer turns out to be in the end. 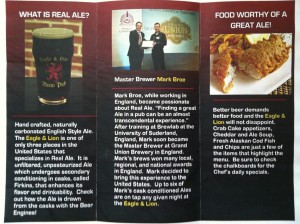 The locals of Griffin, GA (which because of the location will HAVE to make up the overwhelming majority of the customer base for the whole time the place is open), may be willing to be educated about real beer, but the fact that the stuff that Mark will be producing will be so far removed from their experience, I cannot believe it  will be more than a passing phase for them.

This NOT a ‘British pub’ (even in the fake, American sense of the phrase and despite the dartboard) in terms of ambiance, rather it is the somewhat insane notion of a typical American bar that’s brewing its own real ale. In some of the most cosmopolitan environs of the USA this would be an odd combo and a high risk project, but in Griffin, GA it boggles the mind.

The Eagle and Lion’s success will I suspect, NOT depend on the beer that Mark is brewing, rather it will depend upon the other factors that all businesses of this type worry about. I simply cannot see real ale being at the center of a successful business model in a place only a few miles form the Atlanta Motor Speedway so any success that there is (and there may well be some), will almost certainly be based upon macro staples and some decent food.