Beer Blogging – what the hell are people thinking?

So, a few days ago I tweeted these questions (as part of a longer conversation) out to a number of professional beer writers in the twitterverse; 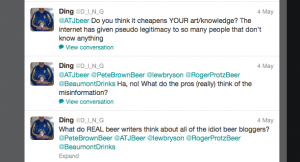 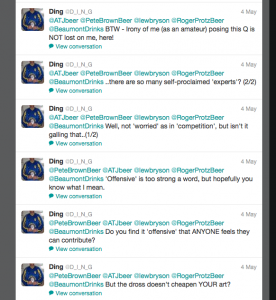 At first it felt like some random thoughts and questions that I had just frustratedly blurted out, but when I thought about it a little more I realized that my outburst was an extension of many other, similar things that I have been ruminating on for quite a while.

It all stared several months ago when I first became aware of the BeerBloggers conference in Indianapolis (@beerbloggers) later this summer (which I might just attend). At first I thought, ‘wow, that sounds cool, I bet it would be a blast to be hanging out with a bunch of beer drinkers for a few days’. Then I started digging a bit deeper, and to my horror it seemed like a lot of the focus of  both the conference and the attendees was actually more serious. People were talking about advertising revenue, how to turn their blogs into money making ventures, and how they were out to win friends and influence people amongst their local beer communities (including cozying up to local brewers in order to somehow gain favor). I found it all incredibly strange for a number of reasons.

(I actually know the answer to question #3, since it is what the internet has created – a bunch of pseudo-legitimate morons, with self-proclaimed expert status, with the curious idea that all opinions are equally valid and that everything is subjective).

Then a couple more things happened. I was contacted by a freelancer marketer who wanted to place a few ads on my site for cold, hard cash! Somewhat ironic given the thoughts that had been going through my head recently, and the fact that I have never had any illusions about turning my blog into any kind of income stream. The marketer and I exchanged a few emails (she was courteous and helpful), but she initially wanted me to make some alterations to the text that I had already written – I declined. When she offered me (an admittedly) more palatable alternative, I checked out the first page that she wanted me to link to. I was horrified to read about ‘Microbrews on a Diet‘ and I immediately declined again, explaining that I thought that the content at the link was laughable. My integrity would not be bought, and any self-respecting beer blogger would surely feel the same way. My bet is that some of the people we’ll find at the beer bloggers conference would have bitten her hand off!

I find the notion that hundreds, possibly thousands of people have turned to beer blogging with the idea that they might have something of value to say (and therefore would want to turn it into a money making venture), absolutely astonishing. Most of the stuff I read is garbage, based upon little or no experience, and has some pretense of being worthwhile – most of it isn’t.

All of which I suppose brings me to my own blog. The potential for irony is not lost on me, but I would defend myself in a couple of ways. Firstly I was drinking high quality beer and was immersed in serious, significant drinking and beer culture decades before most of the ‘Johnny Come Lately’s’ out there, and secondly I blog about beer PURELY for my own mental health, not with the expectation that anyone will read (or care about) what I write, and certainly not under the impression that I might be about to turn my own beer musings into a beer writing career. This feeling is cemented by the fat that I am a published author more than once over, in a completely different field, and I know what a BEAR the publishing world is, and how it can be close to impossible to get traction as a writer of ANY description.

My own beer purgatory and my own mental battles with the beer culture vacuum that an Englishman finds himself in, here in the USA, make it NECESSARY for me to write (vent), and that is this blogs’ only purpose and certainly NOT because, ‘I think I’ve got something substantial to say’.

Android games I found it http://downloadtown.org