Beer, calories, fitness and being 45 years old – ANOTHER problem with the American ABV situation
03/20/2012

For many years I have been conscious of my general caloric intake and also pretty much fundamentally aware of the calories associated with beer. For probably in excess of 10 years now, I have also been very much aware of what I have been consuming in terms of food (not beer) – I’m afraid that simply comes with advancing age, at least if you want to avoid getting huge. In that time I never really felt as though I had to specifically monitor the calories that I consumed, rather I would be happy to eat a plate of french fries or chicken wings one day, and feel pretty comfortable just making a mental note to myself that I’d better not do that again for a couple of weeks.

To be fair, I think that on the whole the ‘system’ that I have employed has worked OK for me. I’ve always had a pretty stout build, and no one would have ever called me ‘small’ in any respect, but with intermittent exercise, a marathon running wife, a lifestyle that is definitely not sedentary (I’m very busy and on my feet moving around for decent amount of my working day) and my ‘system’, I never really felt as though I had to watch my beer intake in terms of calories*.

*For many years I’ve been very aware of the level of alcohol consumption and have been happy to moderate IT, but have not paid much (if any) attention to calories.

Anyway, in the last 24 months or so, age has been catching up with me more than I have felt in the previous decade or so, and a combination of exercising less than I used to, and the difficult challenge of finding high quality craft beer at low ABV levels in the USA, I have begun to feel a little more like I need to watch the calories in my beer (in addition to watching the alcohol which I have always done). So far I’ve NOT been asked to lose weight by my doctor, nor do I have any significant medical issues associated with my weight, but I do feel as though I could use a little more energy and that I would benefit from dropping more than just a few pounds.

I’ve never been a big eater like some men, nor have I had much of a problem with willpower, and nor have I had a lot of trouble exercising or keeping active, but some simple calculations have opened my eyes a little to the EXACT caloric intake associated with beer. To be honest, even though I’ve always known that beer represents a bunch of largely ‘dead’ calories, and I’ve always been conscious of the fact that some beer can come with a lot of calories, with some fairly shallow research and limited thought about my relatively modest (by many geek standards) beer consumption, the results were STILL a little disturbing!

If you are on top of this kind of thing you are probably aware of the following equation that allows the calculation of the calories in 12 oz beer;

RE = ‘Real Extract’ measured in degrees Plato and

Of course, to all but anyone with with the RE and FG values this formula is not of much use, and it’s pretty rare to see even FG on a beer label let alone the mysterious RE. In any case, even if you knew RE and FG you’d still have to convert ABV to ABW, AND adjust for serving sizes other than 12 oz! In short, we need a formula that although less accurate, is more pragmatic. A decent calculation of calories (in any volume of beer) that is workable and therefore useful, is given by applying;

Now, this simplified version is not as precise, but it will give a good approximation that is useful for tallying calories quickly, and with only data about the volume and ABV being required, it means you can quickly and easily apply it to almost any beer that you encounter.

So, my new regime is to restrict myself to approx. 1750 calories in any one day, and this is a problem when you start considering the American craft scene – average ABV is a real issue. I can fairly easily save enough calories in any given day to enjoy a couple of 12 oz, 4-5% beers and still stay below my calorie goal, but where are those beers?? Despite the new ‘trend’ in lower ABV beers in the US, there is still a dearth of high quality beer below 5%, and almost ZERO proper session beer below 4%. When it comes to enjoying a 750 mL bottle of 10% beer (as I did this Sunday), this becomes a much more difficult proposition if I want to work that into the 1750 limit. Using the simplified formula above, that beer comes in at a whopping 635 calories! In order to stay within my limit (which I DID on Sunday), it requires some quite serious meal planning and some significant exercise in order to ‘earn’ the calories ahead of time. Now, I love my beer and I am happy to put thought into it, and I’ve never been afraid of some exercise, but it seemed like quite a lot of effort to get to the point where I could pop the cork on the Unibroue 17 Grand Reserve and sit down and enjoy it guilt free. 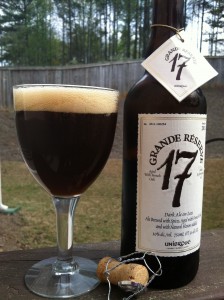 Having said that all of that, my GOD it tasted GREAT, so I now have a whole new appreciation of my beer and a whole new juggling act to perform in terms of ‘working for a beer’ – this is going to be an(other) interesting journey! I’ll be continuing to blog about my calorie intake and how it effects my beer consumption over the next few weeks.