An awakening confirmed, and then re-affirmed by (another) return to my roots
12/07/2011

About four years ago I drove like a madman, across the city (Atlanta), visiting four or five beer stores in the quest to find a few bottles of a relatively uncommonly distributed beer. A week later I found myself doing exactly the same in order to get a 12 oz pour of a rare beer at a bar, that I don’t like much and visit infrequently. That afternoon, as I left the bar, I had a sudden awakening. I was delighted that I did.

It occurred to me that in the years between late 2004 and the spring of 2007 (when the events described in the first paragraph took place) that I had evolved into a ‘beer person’ that I simply did not recognize. I had been sucked in by the peculiarly American trait of overdoing and obsessively pursuing the thrill of accumulation, and, in turn, had lost all perspective in terms of the very essence of what beer is all about – I’d lost touch with my own (beer) roots.

On reflection, at the time this wasn’t all that surprising. The hype and hysteria surrounding the American beer scene was beginning to take off, and that timing was specifically during period when I had not returned home to England for the best part of five years. No wonder I was out of touch with ‘beer reality’! Luckily, through my experience and heritage, I realized the error of my ways and started making the corrections to my behavior that were absolutely necessary if I was to get back to (what I call), ‘the real meaning of beer’.

In the summer of 2007, a few months after the maniacal incident, I returned home to England for an extended period and re-connected with pubs, simple beer, the integration of beer and alcohol into nearly every, daily, social event and the general non-fanfare surrounding drinking culture. The timing was perfect. The experienced affirmed what I had initially realized a few months before in Atlanta, and I felt a true sense of well-being and righteousness! When I returned to the US, it was obvious to me that I would never slip into that dark Abyss of loss of perspective and ridiculous behavior again. Of course, my (crazy) actions pale into utter insignificance when compared to some of the behavior we have witnessed surrounding limited release beers and events in the US, but nevertheless I was ashamed and perhaps more than anything, horribly disappointed with my own, disrespect of beer and beer culture.

Of course, in the years between late summer of 2007 and my most recent trip home last month (Nov. 2011), we have witnessed an escalation of that insane, behavior in the American beer world in a manner which has defied belief. I summarized a little of it in my post about CBS, and although that is just one incident and one beer, it is indicative of what has become commonplace – sad.

Over the course of those interim years (2007-2011) I have selectively withdrawn almost completely from the beer ‘scene’ here in Atlanta. About once a year I may send a text to a friend asking if they can get me a particular bottle of beer and I still visit beer stores once every couple of weeks, but I’m pretty much off the radar when it comes to beer ‘events’, special tappings of casks, tasting gatherings etc. I do still go to The Brick Store, but almost always on my own and just to say ‘Hi’ to Dave, Todd and Lee. The pursuit of beer has become a thing of the past for me.

So, when I returned home to England again last month, I wondered if my relative withdrawal from the beer scene here in Atlanta, would somehow diminish the beautiful contrast of relaxed, ubiquitous beer culture that I had experienced in 2007 when I had returned home last – I need not have worried, it didn’t. 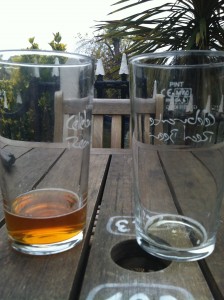 Walking into random pubs, drinking many pints of sub 4% beer in front of roaring fires in buildings of CHARACTER, and touring a 150 year old brewery with only two other guests, tends to put beer in perspective and its correct place –  an act lost in many, American beer circles. On this. latest visit, I didn’t need to worry about my previous loss of perspective, and the re-affirmation of my awakening and return to my roots that I had originally experienced in 2007, was as sweet as sweet can be. These are literally, spiritual experiences for me.