Over the years I’ve organized many tastings, talks and presentations, ranging from the very formal to the much less ‘official’, but each time catering to the specific needs of the situation or the person that I am organizing things for/with. The latest of these events is a semi-formal, ‘fun’ tasting that doesn’t involve my full-on, Craft Beer 101 presentation, but rather just gives a few notes, pointers and other general beer facts with a selection of six beers, (plus a bonus beer) to a group of educated people that are relative beer noobs.

This particular tasting is for a collection of people without a great deal of beer knowledge, and the two specific instructions given were to use beers that are accessible in terms of the palate (nothing too outlandish), and that are available for purchase locally without too much effort.

We’re basing the tasting on 20 people, each receiving approx. 5oz pours, with six beers in the rotation plus an Oktoberfest/Märzen simply to give the gathering a little seasonal flavor. No real theme on this one (which of course is an option), rather we’re just looking for a nice, simple representative sampling of styles, with nothing too taxing for the participants.

The beers I choose and the tasting order were as follows, each one followed by the raison d’être for the choice. 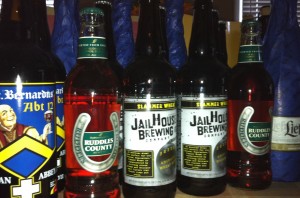 1. Jailhouse Brewing Co., Slammer Wheat; Local, good value, extremely accessible  in terms of the palate and a nice opportunity to be used as a crossover beer. Kicks things off simply and easily.

2. Greene King/Morland, Ruddles County; Invariably I want an English beer in all of my tastings (unless a theme dictates that not to be possible) for more than one reason. Usually the reason is that small, subtle and delicate can be full of flavor without the (American) need to to beaten over the head/palate by aggression. Whilst we always suffer from the fact that ‘it’s not cask’, and it’s not in its original format from the brewery, Ruddles County, in the bottle. in the US, is a still a beer than can exhibit some typical English characteristics in a solid manner.

3. The Lost Abbey, Red Barn Ale; A personal favorite and a beer that I think showcases Saisons nicely. I like including a Sasion in a tasting since they usually represent really accessible beers but also have the ability to exhibit great depth and complexity. They are often ‘crowd-pleasers’ and beers that I think can introduce the idea of beer & food pairings to the general population.

4. Liefman’s, Goudenband; A great beer to give a new perspective to the uninitiated and show that what they know ‘beer’ to be can be extremely different. A beer to challenge the noobs but at the same time it STILL feels drinkable. In that respect it does what a true sour cannot really do by offering quite a harsh contrast to the norm but at the same time also bringing drinkability so as not to ‘scare’ the folks.

5. 21st Amendment, Brew Free or Die IPA; Introduction to craft beer in cans, plus some typical west coast aggression – the antidote to the subtlety of The Ruddles. Shows some typical American traits.

6. Brouwerij St. Bernardus, St. Bernardus Abt 12; Always good to finish any tasting with a ‘big bopper’, and generally the sweeter the better. This is a common choice for me at the end of a tasting. People remember the alcohol!. Other possibilities here include RIS’s.

Wild Card; Paulaner Brauerei, Oktobersfest Märzen; A wild card to introduce a little seasonality, and a beer that we can slip into the tasting at some point, probably between #2 and #3, or #3 and #4. 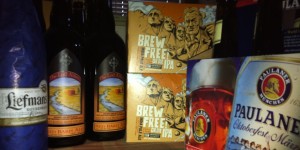 The Tasting Notes, other handouts and logistics:

I do have a 45 minute Powerpoint called Craft Beer 101 that goes into great depth about history, ingredients etc., but this is not the event for that, so I’ll simply talk for about 5-10 minutes about the four elements that make up beer, the myriad of styles available and a little about glassware and taste elements. Here’s a list of the handouts;

Craft versus BMC – something to bust a few myths to start the evening!

Beer Styles – always a good idea to give people an idea of the incredible range of styles that one can be exposed to. Blows the thought of beer only being ‘American adjunct lager’ out of the water.

Beer Flavor Wheel – a useful handle for people to articulate what they are tasting.

Glassware – a nice introduction to the aesthetics of beer drinking and tasting.

My tasting notes on each of the beers – some basic pointers and ideas about where to go next.

BJCP/AHA Scoresheet – The scoresheet is obviously not especially appropriate since we are not talking about rating to style here, but at the same time it does give categories of appearance, nose, flavor, mouthfeel and overall, and that makes things simple.

As a nice way to send folks on their way with some more knowledge, I tend to suggest some magazines, web sites and a few of my favorite books. Just a small selection.

The Web – I still feel that the GREAT, single, undeniably indispensable site is missing, so for now it’s a combination of these places (and a few others). Twitter is really becoming and excellent resource too, and you can follow me and check out the people I follow, here.

Beeradvocate.com – despite all of my well documented unhappiness, and the fact that the forums are increasingly populated with 20-something ‘dude’ hipsters spouting absolute nonsense, it still remains the ‘cleanest’ web resource out there.

RateBeer.com  – a better database than beeradvocate and an infinitely less insular American crowd, but the design of the site remains atrocious and the ticker mentality rules in the reviews.

Thebeerspot.com – potential, but the forums are an annoying combo of more serious beer talk and unmoderated nonsense. The addition of gifs. pictures and emoticons make it worse that ratebeer to look at sometimes!

untappd.com – database is a bit of a mess at the moment, but a neat, fun, social media way to record your beer consumption. Massive growth in the last 12 months.

Books – Beer books can offer a LOT of different angles depending on their focus, but here’s a few I really enjoy.

500 Beers – Zak Avery – Zak runs a specialty beer store in the UK and was the British Guild of Beer Writers Beer Writer of the year in 2008. Man with a handle of the modern UK scene.

1001 Beers You Must Taste Before You Die – Adrian Tierney-Jones – British beer writer.

300 Beers to try Before you Die – Roger Protz – CAMRA writer Protz is an experienced disemmenator of beer knowledge.

A Beer A Day – Jeff Evans – Another CAMRA writer.

Tasting Beer  – Randy Mosher – I’m not in love with some of Mosher’s opinions or ideas, but this is a truly interesting read if one ignores a few pages!

Great American Craft Beer – Andy Crouch – New England based Crouch is a younger, fresh writer who has a finger on the pulse of the contemporary, American scene.

I remain subscribed to Beeradvocate magazine for now, and I still enjoy reading it.

Beer Connoisseur magazine is definitely a more upmarket feel and feels like the Beer version of the Wine Spectator.

All About Beer is the oldest of the bunch that still offers good value.

The Pictures from the tasting: 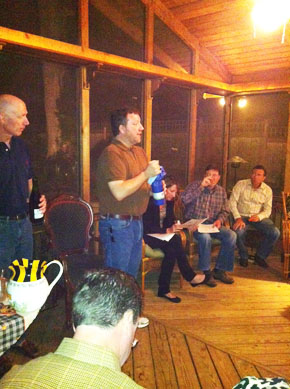 downloadsvia.org Visit This Link Check This Out