The REAL thrill of (not) beer-hunting

Following all the ridiculous bullshit associated with the CBS release of last week (that I wrote about here), it was somewhat ironic (and tremendously gratifying) that at an almost simultaneous occurrence acted as the perfect antidote to the pant-wetting, destructive geekery that was exhibited by the frantic mayhem that ensued with the Founder’s release.

Last Friday I happened to be casually surveying the singles shelf of a store that I visit at least once a week, and as usual I was not expecting anything out of the ordinary. As I glanced at the shelf I had to do a double-take. Was that really what I thought it was? No, it can’t be. That’s a beer that has never been released in the bottle in the USA in the 11+ years I have been living here, and a beer that I had only seen twice in that time in random kegs that had turned up out of state and out of the blue.

I knew it had been in Canada all of that time, but I had never had occasion to get a bottle. The beer is not an especially well thought of one, it’s not generally highly regarded or rated, and reviews often point to the ownership of the multi-national conglomerate as a negative. However, I’ve always enjoyed the beer, thought it good value for money and generally had a huge affection for it even knowing that perhaps it was not the greatest beer ever brewed. Now, it is true that some of that is affection is based in the tremendous nostalgia I have for it.

I used to drink this in Holland, Belgium and France on my regular, multiple visits per year to those countries starting circa. 25+ years ago. I used to sip it in street cafe’s and in rustic, continental cottages on long, hot summer days & nights in some of my most formative, youthful moments – in short it is a beer that I have colossal affinity for, and it was like unexpectedly seeing a long lost friend after (literally) many, many years. No wonder I was absolutely thrilled when it appeared with zero fanfare, zero expectation, zero announcement and zero effort, right there before my very eyes. THAT’S what I call A REAL THRILL and a real moment of what beer signifies.

The beer in question? The much maligned, non-spectacular, Leffe Brune now owned by InBev. More happiness than a ‘rare’ beer could ever give me. 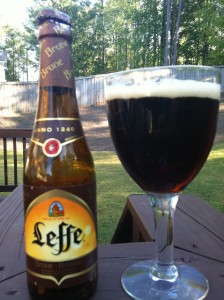