Discretion. Where’s it gone? Actually, it was never here!

When I moved to Atlanta, GA in the summer of 2000, one of the first questions that I asked one of my new colleagues was, ‘Where can I buy great beer in this town?’. Being a person who had lived here for many decades, he immediately replied, “Green’s”. Encouraged, I trotted off to Green’s on Ponce de Leon Avenue with a sense of great excitement and anticipation. Much to my dismay, I was confronted with a bewildering selection of macro nonsense, and not at all the cosmopolitan selection that I was expecting in a town that had hosted the Olympic games! At the time I had no real understanding of the role of beer in the bible belt (as was witnessed by a furious exchange that I had with a supermarket cashier when I naively attempted to buy beer on a Sunday her ein GA), nor was I aware of the 6.0% ABV cap that was in place at the time. Once I understood these things, I realized that life was going to be HARD (from a beer perspective) living in Atlanta.

Of course, since that summer things have changed dramatically in Georgia. From the lifting of the the ABV cap in June of 2004 (I recall being at Green’s as they opened on June 1st to purchase my first US based bottle of St. Bernardus 12), to the enormous and seemingly endless influx of new beer to the state (which has accelerated beyond even the most optimistic predictions), on to the point where we have seen a number of new beer producers opening in the state, and significant expansion of production of those that were here prior to this, more recent explosion. This colossal and at times almost unfathomable growth, brings me to my point – IT’S NOT ALL GOOD. In fact, far from it and a lot of it is mediocre with a sizable portion being truly poor. I want to make a couple of points in relation to this enormous growth, one with some specific examples, but perhaps more importantly a wider, more general comment in the second observation.

Firstly the specifics. One brewery that I think has particularly lost its way is Terrapin. I recall drinking Big Hoppy Monster for the very first time and thinking that it was a beer that could ‘shock the world’. It was truly amazing and I wondered if this was a brewery and a brewer that was going to scale the greatest heights. Actually, the first time I bought a four pack Big Hoppy Monster was not the first time I had tasted a version of that beer. Very early in the decade I was in the habit of attempting to introduce (and educate) my friends and neighbors to and about good beer. (This ultimately became an exercise in pissing into the wind, but that’s another story). Anyway, I would occasionally solicit local beer folk in an attempt to get door prizes to share with the participants of my tastings. To that end I met Spike at 5 Season’s Prado where he was brewing at the time, and he gave me a bottle of the precursor to BHM. I remember that as I sat and talked to him, he received some live yeast via courier and his excitement was palpable. On the few occasions we have met since then he has been gracious and charming and nothing but ‘good people’. All of that notwithstanding, I feel that since those early, heady days, Terrapin has gone on a tremendously misguided tear in recent years where we have seen an unfathomably vast array of beers being released, in ultra-quick time, that have simply been really, really mediocre, and it at least two cases embarrassingly poor. The enormous tidal wave of Midnight Projects, Side Projects, The Theatre Series, Reunion Beers, So Fresh, So Green and other beers, has birthed only a few truly good beers (Depth Charge and a couple of others) but in stark contrast has also produced a truly long list of dreadful ones (Monstre Rouge topping the list, but a whole bunch of the Side Projects that have simply been sub-par). Spike and Terrapin are BETTER than this, but I think that they have been caught up in the wave of general enthusiasm for craft beer and have allowed the market and economics to dictate their output rather than pausing and applying discretion as to what makes sense from a BEER point of view. This brings me to my second point. 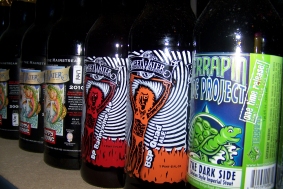 In the foreground one of the 'better', Terrapin Side Projects, 'The Dark Side'

Those of us who are educated, fully understand the importance of preserving natural resources, taking care of the planet and generally needing to be good stewards of the things we have been handed. We ‘GET’ the idea that the use and promotion of local business and their products makes great sense from both an environmental point of view AND from an economic point of view, as it helps to grow the local economy and raise its profile for increased local affluence. That’s true of local beer and local breweries in a more profound way than many other sectors, HOWEVER, just because it’s local doesn’t mean it’s GOOD! In many recent cases in relation to beer in Atlanta frankly the opposite has been true!

There is a blatant homerism that seems to have surrounded much of the Atlanta beer scene of late, with a number of new drinking establishments and local beers being trumpeted as fantastic, when in fact that has been far from the truth. The recent debacle that were the first two beers from Red Hare is a classic example, and some of the beer at The Wrecking Bar as not been impressive to me either. I also thought McGowan’s in Oakhurst was dreadfully disappointing and 5 seasons Westside (although I am in love with most of Crawford’s beer) dreadfully lacks atmosphere and serves food which is just a little too ‘clever’ IMO. Taco Mac continues to brutalize some great beer in a manner that is criminal, but to be honest I’m really not trying to pick on any of those beers or places specifically, rather I am trying to make the larger point that everything local and new is not necessarily great and that everything that is NOT BMC is not great either. There is plenty of mediocre ‘craft’ beer out there, and a very significant amount of really TERRIBLE craft product, too. (As an antidote to what I have written above it would be remiss not to speak of Jailhouse in GLOWING terms and not to give honorable mentions to Monday Night Brewing and Wild Heaven, but I think my point is still valid).

I suppose that this is part of the same equation that has led the American beer scene down the road of ‘imperial this and that’, massive ABV’s, hop profiles that will remove the enamel from your teeth and beer events suffering from the constant dog and pony show syndrome, in as a much as they are reacting to decades of nothing but watery macro lager being the only thing one could get. It’s an over-correction and a need to establish an identity that drives such misguided enthusiasm but it’s about time time someone pointed out that the Emperor is naked!.

I guess much of this is just a symptom of a fledgling beer culture finding its way with those first baby steps, and when a few centuries of real beer understanding have been established like is already the case in the traditional brewing nations in Europe, then we may see some more discretion and considered opinion. For now though, in the contemporary America beer scene, pretty much all you have to do is make a BIG and shiny beer, wave it in the air with some hoopla, and the pant-wetting geeks will follow with their unconsidered, unabated praise regardless of the actual quality.