DISCLAIMER: I don’t know if this post will make much sense since I am trying to get a load of stuff whizzing around my head into focus, but for now this is my best effort. I hope it conveys something of what I am struggling with.

‘I’ll be down the pub’. A phrase that countless generations of British males have uttered to describe most of the waking hours that they devote to socializing, and a phrase that I intend to use extensively myself when I travel home to England later this month. This visit however will have a slight twist, as some new, ‘non-traditional’ venues will be added to the usual list of public houses.

This visit home will be my first in just over four years. Since moving to the USA in the summer of 2000, I have traveled home on only two other occasions, so this trip is long overdue. The visit is partially business, partially pleasure, but since so much business in the UK is often conducted over a few pints anyway, I suspect a fair amount of time will be spent in the pub! The time spent in the pub on my visits home is not a trivial matter. Like many Englishmen almost 100% of my formative (social) years took place within the walls of these hallowed establishments, and therefore I have found it literally impossible to divorce any of my most profound human relationships from them.  The pub is what tied my family and friends to my social development. That all may sound ridiculous to your average American, but to English readers it’s likely to strike a chord. On my first visit home in 2002 after moving to the US, I broke down, overcome with emotion when I first stepped back into the pub (and BEFORE I had even touched a beer) – the connection is that strong.

As a result, perhaps the single most profound source of my acute ‘beer unhappiness’ in the USA has been the almost total absence of establishments that can replicate the unique experience of the English pub. Countless numbers of people have written about the truly spiritual, iconic and central role that the pub plays in British society so I don’t intend to cover all of that ground again, but suffice to say that the spiritual connection has been irreplaceable. The absence of those venues (and just as importantly the absence in the USA of the casual, ubiquitous role that beer plays in everyday life when compared to the UK) is at the root of my dissatisfaction with American beer culture.

As I prepare to go home this time, I do so against the backdrop of arguably the worst period for British pubs in living memory and perhaps, ever. When I say the ‘worst period’ I am talking exclusively about the number of pubs that have closed in the UK in the last few years, and not any other perceived issues. However, a closer look at the most recent stats suggests that the closure rate is slowing down significantly since a peak in 2009. It has always been my contention that, (a) much of these closures are related to the economy and not to any real change in the cultural habits of British people, and (b) that it’s only the poor, badly run pubs that are closing. The global economic situation is simply an undeniable part of the problem (and I know from talking to my friends that nothing has really changed in terms of their pub going), but more controversy surrounds things like smoking bans and the higher taxation of alcohol. Hopefully my visit will allow me to get a better handle on what’s really happening on the ground. In any case there are still somewhere around 54,000 pubs in the UK and I fully expect to find that they are continuing to serve as vital, social glue for millions and millions of Brits in the way that they have done for centuries.

In addition to the traditional pubs that I intend to visit, I am also going to seek out a completely new breed of drinking establishment that has recent sprung up in the UK, that from afar, do not seem to fit into same mould. These new establishments have been described in many different ways by many different people, but The Rake in Borough Market, The Euston Tap in central London and The Bull in Highgate, represent what I would characterize as ‘craft beer bars’ and most definitely NOT ‘pubs’. In England the term ‘craft beer’ is going to confuse a lot of people right off the top. Thanks to CAMRA, the UK was never gripped wholly by watery, tasteless mass produced lager in the manner that the US was (as still is to some extent), and as a result the UK never had to go through the kind of beer revolution that has been witnessed recently here in the US. We usually refer to beer in one of two ways, ‘good’ and ‘bad’ and since good beer was always an alternative to macro brands in a manner that was not (and in many cases is still not) in the US, the use of the word ‘craft’ was never necessary to distinguish good beer from bad. Great British beer remains almost exclusively associated with cask (real) ale, generally revolves around just a few styles such as Bitter’s, Mild’s, Stout’s and IPA’s, and is inexorably linked to THE PUB. In one respect one could say that the UK could use some education in relation to what represents ‘good beer’, and if I were to be completely honest I think that there is some truth in that statement, but either way the essence of what it means to be part of British beer culture will always revolve around traditional beer in a traditional setting. As such there’s no doubt in my mind that bars like The Rake and Euston Tap will NOT signal the birth of a whole new breed of British drinking establishment – there’s just too many centuries of real pub culture and too many 14th, 15th and 16th century coaching inns still operating as pubs in England – but in affluent, cosmopolitan areas they will likely do very well by providing a somewhat yuppified experience for those looking for something different. Outside of those metropolitan areas the idea of a bar like the ones mentioned here will be seen as utterly pretentious, expensive and ridiculous nonsense, but doesn’t mean to say that they won’t have a role to play in the future.

This type of craft beer bar is hugely popular in the USA, mainly because if you are NOT in one of these types of establishments then you are likely to be in a tacky sports bar, with a thousand TV’s and only Bud, Miller and Coors for company. In short, in the US if you are NOT in the equivalent of The Euston Tap or The Rake, then you are not likely to be going to being drinking good beer, and you are not going to be in an ambiance that is anything other than ‘throw-away plastic’ and utterly devoid of character.

Of course, these ‘specialty establishments’ dovetail perfectly with the way that good beer is usually consumed in the US. Here, craft beer is persistently associated with ‘events’, where big beer dinners, special tappings, tap takeovers (where all of the bars’ draught lines are simultaneously devoted to a single brewery for the evening), meet the brewer nights, organized tastings, limited releases and the like, are put together with an emphasis on a dog and pony show where huge crowds gather to queue for beer and generally make a colossal song and dance about the consumption of beer. This is of course is in complete contrast to the way great beer is consumed in the UK. After work, in the pub with maybe one or two friends or even alone, where one walks to the pub and sips lots of beer of the course of the evening without any kind of hysterical fanfare. In the UK it’s low, low key in a way that beer geeks in the US don’t often understand. This is emphasized by the fact that most of my beer drinking, beer knowledgeable buddies in the UK, have never heard of this new breed of bar, whilst American beer geeks have The Rake, Euston Tap and The Bull on the top of their lists when they visit London! Crazy. Little do they know that if they shun traditional pubs for these Americanized, craft beer bars, that they will be missing out on the very essence of ‘The Best Of Britain’ and what it means to drink beer in the UK. 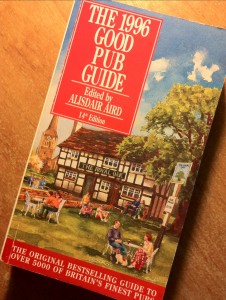 The Good Pub Guide 1996 with no 'craft beer bars' listed!

To be fair, I’ve never set foot in any of the UK’s new breed of establishments that I refer to in this post, so I guess only time will tell if they are as ‘American’ (and therefore to my acute disliking) as I suspect they will be when compared to the traditional, understated pub (from reading online The Rake looks a tad more ‘traditional’), but either way I should still be able to get a decent pint (or 16 oz!) even if it’s not a 3.5% mild! I wonder what I will find. We’ll see.