In the last few days I pulled both an Allagash Victoria and a Victor from the cellar; both were purchased fresh in August of 2008. Here’s a quick note on what I found with these vintages.

I cellared both of these purely and simply on the basis that I really enjoyed them as young, fresh beers. They seemed like they could have been a couple of interesting candidates for cellaring, with their grape elements and their ABV’s, so after just over 3 years the experiment was complete. 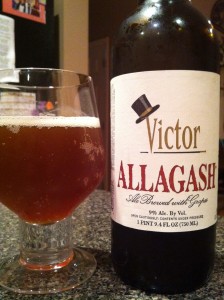 In a nutshell, neither did very well when compared to their fresh, originals. Both had developed a light cardboard element which gave a musty, dull edge to the beers. It definitely affected the Victoria more than the Victor, since originally (as fresh) the Victoria  benefited from some very clean edges and a well-defined, dry grape character – that had largely gone. The fresh Victor had less of that present, so it seemed less changed than its sister brew. The combination was interesting in as much as when fresh in May of 2008, the Victoria earned a 92.50 score on the Ding Points scale, and Victor a 93.00, so although both were superb originally, the slightly better one fresh was still the better one aged, and perhaps even by a wider margin. 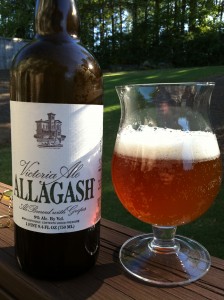 Here are reviews on the fresh examples, both from May 2008;

Poured into the tall, stemmed, Abbaye des Roc Chalice to reveal a honey colored body with a small head that fades to give a surface of foam and a tiny amount of lace.

Nose has light alcohol, and the mild, solvent like character associated with wine – the grape notes coming through strong.

This is NOT a Belgian Strong Dark by any stretch of the imagination. It’s much more like a Belgian Strong Pale with some Champagne character coming through too. Full and creamy in the mouth, the carbonation is perfectly understated. A light acidity accompanies the finish and the alcohol, although present, is really nowhere to be seen in terms of its power. very light tart notes, but very reserved.

VERY subtle, light and delicate, another one of those beers that you could happily substitute for wine or a mild aperitif or toasting option.

I think this is classy – Allagash rarely misses, and this is another fine example of a beer that is streets ahead in terms of class.

Not retired unless this is a new recipe and therefore a different brew. I passed on this when I was in Greensboro, NC in November as it was quite pricey. Now it has made it to GA in the latest wave of Allagash products to come into the state, and I’m delighted.

Poured into the new, 22oz(!) Terrapin snifter, this looks great. A great choice to christen the new glass. Lovely honey colored body with a thin film of fine bubbled head on the surface. Some lace, but I don’t think that the glass (as attractive and nice as it is) retains it very well.

Nose has some yeast, alcohol and plenty of green fruits. Promises much.

The taste delivers on the nose. Delicious, edgy vinous quality that brings together a great white pepper, wine, Belgian Pale, yeast, alcohol combo with a very small hint of Belgian sugar. Dry, alcohol based finish cuts is as well, but not before the fruitiness and alcohol have combined to deliver a sweet and sour tart and boozy mixture that hits the spot beautifully.

Mouthfeel is the weakest part of this beer with a little prickly carbonation that could be toned down a little. Doesn’t really subtract from the beer, but it was a touch sharp.

I thought I would really like this, and I was right. A CRACKING brew – delicious.

The alcohol cut through the Victor quite nicely in the aged version, and a little less so in the Victoria. Carbonation was much lower on both, and the corks popped without much gusto.

I enjoyed the aged Victor, but the Victoria, although still ‘OK’, had lost a lot for me. However, in both cases the fresh examples were significantly better than their 3+ year old counterparts. The downhill elements had cut in on both, so perhaps a shorter cellar time on each beer would have yielded better results.

As we all know, the cellaring experiment is just that – an experiment – and although both beers were still very drinkable, both had lost quite a bit. Fresh works better (for me) on the Victor and the Victoria, with the Victoria suffering a little more than its brother over time. Glad I performed the experiment, but wouldn’t bother again.