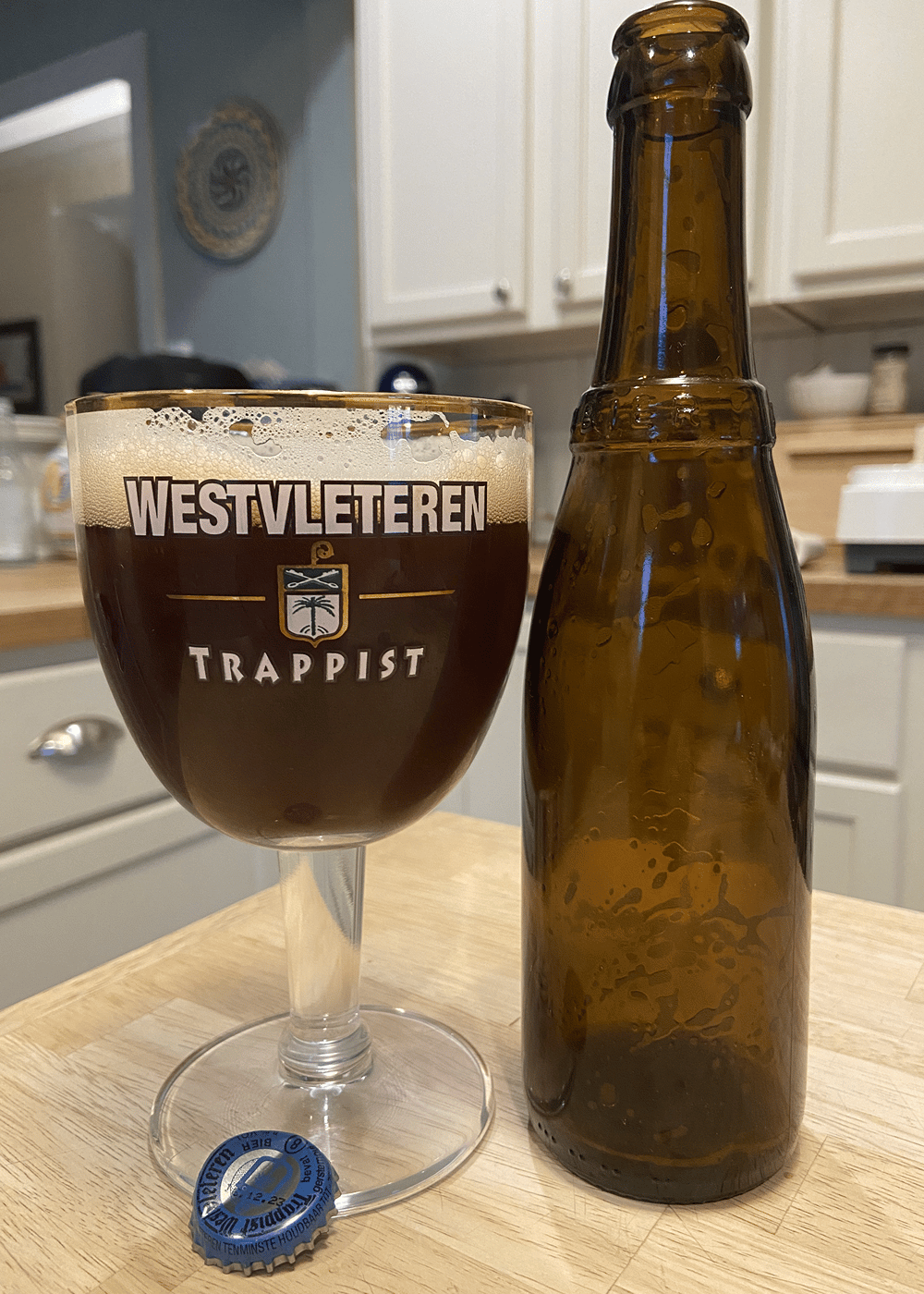 This bottle has a great head; deep and pitted. The Westvleteren creamy mouthfeel and richness as the trademark is stronger in this bottle than I’ve seen in a number of others.

Very robust beer that wipes the floor with other ‘Dubbels’, although to be honest, is this really a Dubbel in any way other than appearance?

First pour is surprisingly carbonated but he head fades. Almost ‘fizzy’, this is definitely older. The initial pour gives some burgundy hues that the latter doesn’t after the sediment enters the glass.

Nose is rich with requisite candy, figs and raisins.

Mouthfeel is a little light at this age, but that adds to the drinkability. Alcohol is light too. Mainly woody figs and some bakers chocolate. Not as rich as the nose might suggest.

Drying and appropriate finish. A tiny cardboard note (age), but still has a ton of complexity. Bitter aftertaste lingers a little but the reward follows a few seconds after that. Marzipan and some warming alcohol followed by contentment!

I’ve drunk this beer probably 6 times in the past, and this is the oldest I have had it. On balance I think younger is better with a sweet spot 2 years in.

Firstly, I owe BA SilentSabre a huge debt of gratitude following his trauma in getting this to me. For those that didn’t read his posting on this, essentially he had a case of this shipped to him directly from Belgium only to find the whole case, bar two bottles, had been smashed in transit. Prior to that nightmarish event, he had promised me one of the Westy’s, and despite the fact he only got to try one bottle for himself from the shipment, he still had the good grace to stick to his word and pass one of the survivors on to me – thanks man!

Anyway back to the beer. Pours exactly as you would expect a Dubbel to. Cloudy, dirty brown appearance, some floaties, but with a better than average head – frothy coffee type appearance, almost cappuccino in appearance.

Aroma is all fruit, especially bananas, and to be honest it had the whiff of what I would call a luxurious Hefe! The luxury is continued in the mouthfeel, very silky and smooth especially considering the style of beer we are dealing with here.

On to the taste – very typically Belgian Dubbel with two notable exceptions. Firstly there was a definite added complexity, but the real surprise to me was the finish and the aftertaste. It was really quite dry, alcoholic and a very pronounced bitterness. It very strongly reminded me of a 1970’s Guinness.

Overall a very, very nice beer, but it would have to do an awful in order to live up to the massive hype. It pulls it off, but only just!