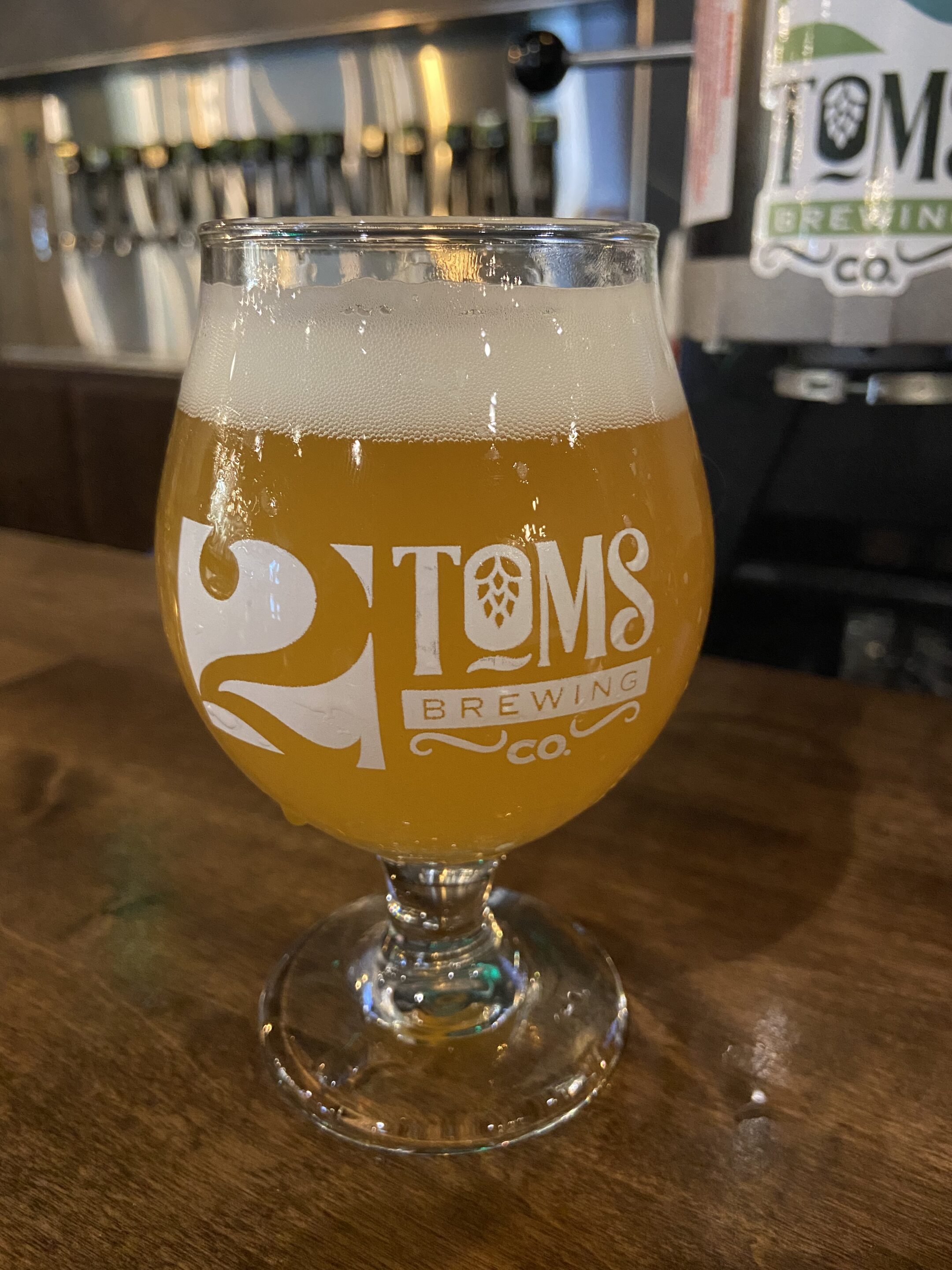 When a brewer/brewery owner texts you and says that there’s a beer coming on in a few days that he thinks that you’ll like, you pay attention. When Tom Carpenter is that brewer, who has had to suffer my bitching and moaning about some of the beers that he brews (in particular the recently re-released Cereal Killer series), it adds a certain urgency. He knows what I like, and more pointedly, he knows what I don’t! Mystic Farms is a French Oak Chardonnay barrel-aged Saison with Brett.

Tom has crossed a lot of boundaries with beer that I’m not happy about. We could have that debate here again but it would be pointless, mainly because it would detract from a beer that really is excellent.

If I look at the thousands of beer notes and reviews I’ve written over the years, the first words in each of them are often devoted to appearance. Makes sense, right? However when I see what I have first noted about Mystic Farms I see the words “pillow-like and fluffy”. These are of course referring to the mouthfeel which sets things up beautifully for what follows. The mouthfeel here is important, mostly because it frames so much of the remainder of the experience of the beer so well; it really plays an outsized role in the overall scheme of the beer. Anyway, back to the appearance …

.. we get a hazed, mid-orange pour with a SRM (to my eye) of about 9-10. TBH I’m not a great judge of SRM, so take a look at the associated picture and make of that what you will. A nice, medium sized, pillowy, white head, and some lace. The lace and retention are not amazing, but are above average. Nose and initial tastes offer a tartish apple. There’s plenty of farmyard manure in there too, and here we get to the essence of the beer.

For years and years I’ve been annoyed with people’s inability to distinguish between tart and funk. In some cases it might be laziness, and in others just ignorance, but they are not the same thing! All Saisons worth their salt will of course, have competing (complementing) elements of each, and Mystic Farms is no exception. It has a LOT of English (Somerset and Devon) farmyard notes, but if I’m brutally honest, accompanied with a touch more tartness than I prefer. If there’s going to be a battle between funk and tart – and there will be – I want funk to win every time. Here, it feels like the funks takes a slight, secondary role. Having said all of that, the Brett is present in sufficient quantities to still make the overall experience a delicious one, and the drinkability for me is off the charts.

As the beer is consumed the tart and Brett meld further into one another, and together they create a far more rounded, singular experience than either could individually deliver, and for me that brings me back to the mouthfeel. The beer exists as as single entity of experience, and that is despite its layered complexity. I’ll freely admit that my bias for barrel-aged beer begins and ends (mostly) with vinous ones (if I want Bourbon I’ll drink Bourbon, not beer), and relative neutrality of the French Chardonnay is a perfect match for the style (of course). There’s a grape must that comes through which is the making of any such beer, and the apple notes linger all the way to the end. Excellent, tasty, and brewed in all the right ways, a 2Toms beer that I can really get behind.

I know that readers will consider my notes, comments, and musings about this beer to whatever extent they chose, but maybe a better summary is this. Last weekend I drank a spectacular Fantôme Saison, Strange Ghost, and although I’m absolutely not comparing the two (they are utterly unconnected to one another in just about every manner that one can imagine), Tom Carpenter’s Mystic Farms is a beer that on the same menu, would not look out of place. When it comes to the bizarre, the complex, the stunning, and the spectacular world of well-brewed Saisons, that should be seen as blessing enough. If you live close, know little about beer outside of what’s happened in the last 5-10 years, then get yourself to 2Toms for a little education.