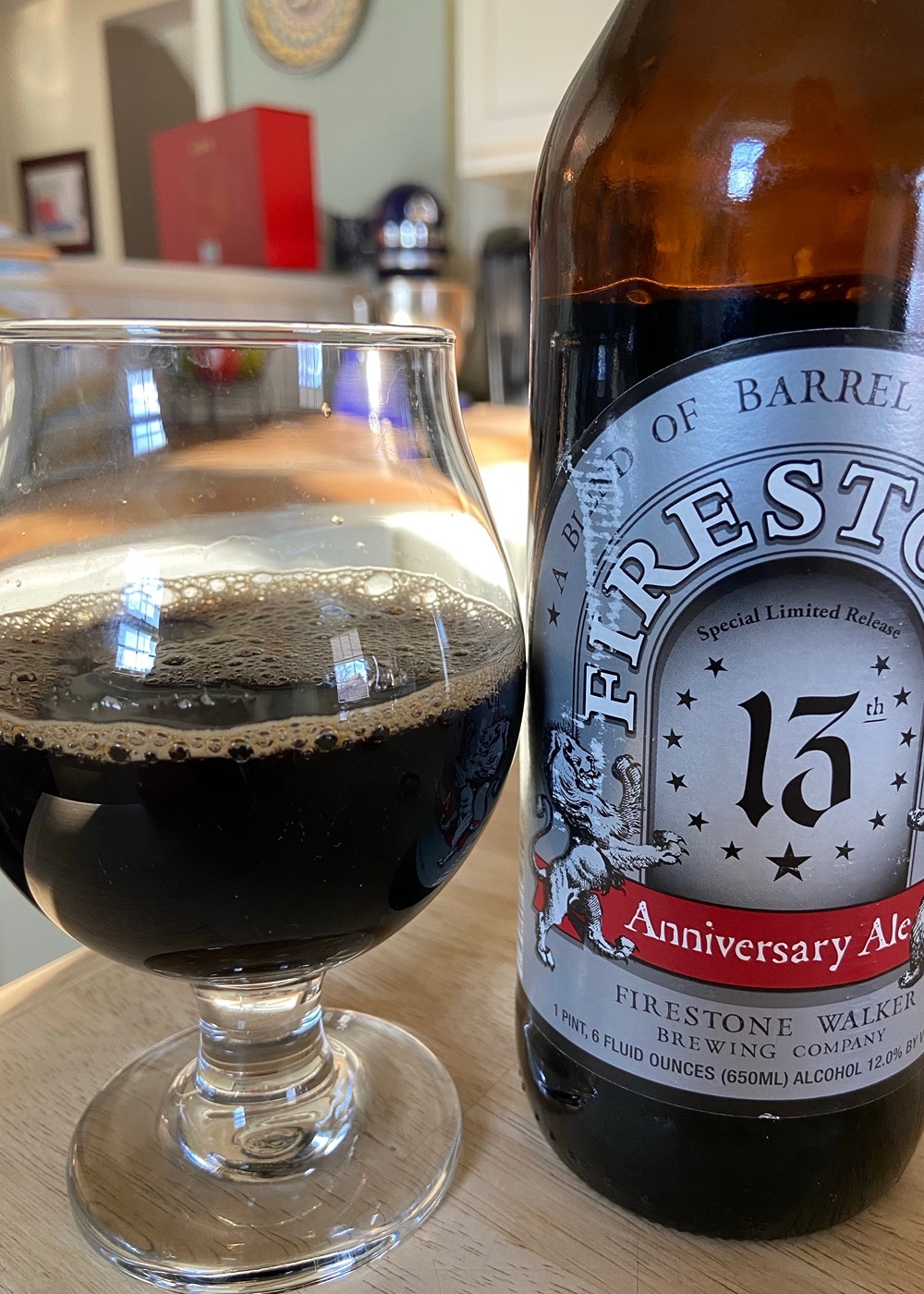 I think this is now 12 years old, possibly a little more. I was inspired to crack it on the basis of just ordering the 25th Anniversary Ale from FW. I still have a XII and an Eleven left to crack. They’ll be opened very soon.

From a distance a jet black body but with plenty of red-brown highlights at the edges when the light hits it just so. When the glass is tipped way back, and the volume of beer is reduced significantly, the body is almost completely dark scarlet red.

Carbonation is, if anything, very slightly better than I expected at this age. I mean it’s still basically “uncarbonated”, but an aggressive pour does create a few bubbles on the surface. It doesn’t look “dead”.

Some prune-like, vanilla, alcohol notes in the nose. The best part of the nose can be appreciated by smelling the beer directly from the bottle rather than the glass. The bottle concentrates the volatiles and brings out the best of what we can draw from the beer at this age.

The mouthfeel is quite smooth and even silky in parts. It finishes with a little drying alcohol which if I’m honest, is the least appealing part of this beer.

Tastes are not overwhelming at this point. They have perhaps been pared back and simply muted by time, but you still know exactly what they were at their peak. No alcohol burn at this point at all, but waves of warming EtOH drenched in brown sugar, a touch of vanilla and an ever-present, figgy, dark fruit. It’s pretty much exactly what I expected. There is little to no oxidation detectable to me, no harsh tobacco, no bitterness. It gets bette as it warms. The opening up of the base molasses element really comes through with an increase in temperature.

Look, I know what I’ve missed here, but this has developed into a beer that still holds its original characteristics together even if they have been tamped down over time. Very lucky to have kept this one, and delighted that it has turned out this way at this very late juncture.

22 oz, boxed bottle as per the FW Anniversary series.

A couple of inches of snow in Atlanta, another half inch of ice on top and a snow day gives me an unexpected opportunity to crack this one – not much else to do!

Beer pours essentially a jet black pour with perhaps some very dark brown colors at the extremities. A thin, tan head that recede to give a white color around the glass.

The nose is strong even when the beer is cool, but becomes potent as it warms. The liquor and alcohol aromas are increasingly strong, and really sharp in the nose from several inches away, and noticeable from several feet! This concerned me a bit, since I was thinking that if this was going to manifest itself in the taste then I wasn’t going to be too happy.

The tastes DO reflect the nose, but they are surprisingly mellow when considering the volatiles that are escaping the DFH signature glass. With over a year on this beer, there is a pretty large element of sweetness that stands up to the aggressive liquor notes and the alcohol. Make no mistake, this beer is still a big beast, but there is a tamed element to it, despite the warm that builds in the chest on the way down, and the light solvent touch that evaporates in the mouth as the beer is consumed.

I was very wary of this before I opened it as I typically don’t care for the bourbon notes too much, but there is a whole bunch of other notes that combine to produce a great package; oak, a little smoke, vanilla, dark plums and molasses and rum. The alcohol stings and gives a touch of pepper as well. These tastes meld well with the bourbon elements to produce a full on assault that is surprisingly drinkable.

Tasty and better than I was expecting and certainly more drinkable.