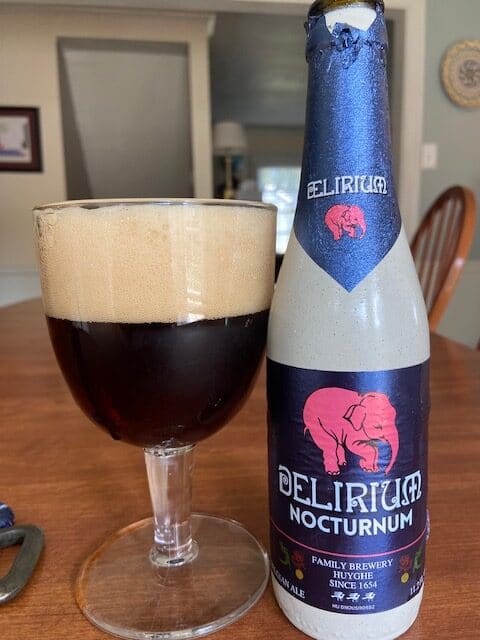 The body still has that great, mahogany color, but with larger red elements than I remember and that my 2005 notes suggest. Head is also retained better and is a bit thicker and creamier.

Fruit esters still dominate, and the beer is not quite as deep as many others in the styl, but it’s still a lovely drink. Finishes with the drying alcohol. These days it’s $22.99 for a four pack.

Corked and caged “ceramic” bottle. Poured into a St. Bernardus chalice I get a very deep brown mahogany body and an initially large head that fades pretty quickly. The head falls back to give a modest, but very attractive thin, spotty, creamy film across the large expanse of the surface. Each sip pulls some lacing up the side of the glass and reveals its true character – an immensley fine carbonation, with incredibly small bubbles and a frothy, fine texture. Very, very attractive.

Standard fruit esters make up the bulk of the aroma, but they are not overwhelming, in fact rather understated.

Mouthfeel increases in depth as in warms. In terms of the taste the finish is dry and long and leaves a little hop bitterness. A tiny bit a citrus at the very end. As the warms it rounds a little to bring the tastes to the fore. Frankly it’s quite dry and lacks the really rich fruit depth that one might expect from the style. Reminds me much more of a Dubbel that anything else.

Nice, but not a stunning brew, a little dry and a little lack of deep fruit flavor.