I want to support new(ish) and local breweries. I really, really do. But as a legacy beer drinker, it’s becoming more and more difficult to do so.

I suppose I should attempt to qualify what I mean by a ‘legacy beer drinker’. I’m talking about somebody who’s been drinking beer for several decades, who has been immersed in the beer scene, and is a lover of traditional styles and traditional beers. i.e., me! There are a lot of us out there, we’re just under the radar in a vast sea of canned hazy bois, pastry stouts and non-descript ‘fruit sours’.

So what’s a (legacy) man to do in 2021 and going forward? Get out there and see what beer is available, right? So I start with Tavour which promises to bring me all of the best new beer being brewed. Well … the first thing that I have to do is avoid all of the beer that I have zero interest in (the beers that make up the vast sea mentioned above). This is a pretty constant task on Tavour, as just about 9 out of 10 of the beers featured fall into the aforementioned categories. Once I do that, every now and then a beer will pop up that I think, “OK, that might be a possibility”. In the last few days there were two such candidates on Tavour, but within seconds of scanning each of them, I’m disappointed in both.

Firstly Burgh’ers Brewing & Crafted Culture Brewing Company’s, Knock if Ya Bock. Advertised as a Doppelbock – great, a traditional beer from a part of the USA with strong German roots – that unfortunately has hazelnut added. Errr … why the fuck do that? Can’t you just leave alone? What’s wrong with brewing a simple Doppelbock? I’m instantly pissed off at the lack of respect for the style, and the missed opportunity. So annoyed in fact that I don’t even stop to consider the fact that Tavour wants $7.50 for 16 oz. That’s the equivalent of $33.75 for a six pack, for a bastardized style, from a couple of brewers that have been around for (relatively) 5 minutes. Forget it. Who is buying this stuff? What’s the demo of the market? I don’t get it.

Next up I spy Georgetown Brewing’s, Bob’s Brown Ale. This appears more traditional (good), but at $3.50 for a 12oz can ($21 for a six pack, PLUS the Tavour shipping charge), how can I justify that? I mean I want to try it, but c’mon man, help me out here. I have six packs of well-established brown ales, from breweries like Rogue and Big Sky Brewing, for half of that price.

In the wake of those experiences (which TBH are just two of a colossal number of similar ones that relate to the modern beer scene brought to me by Tavour), I decide to seek some local beer at Dot & Line Brewing here in Fort Wayne. I’ve written about D&L before, and I think that Phil Comparet is a man who is interested in traditional beer, but then I’m confronted with this board at the taproom. 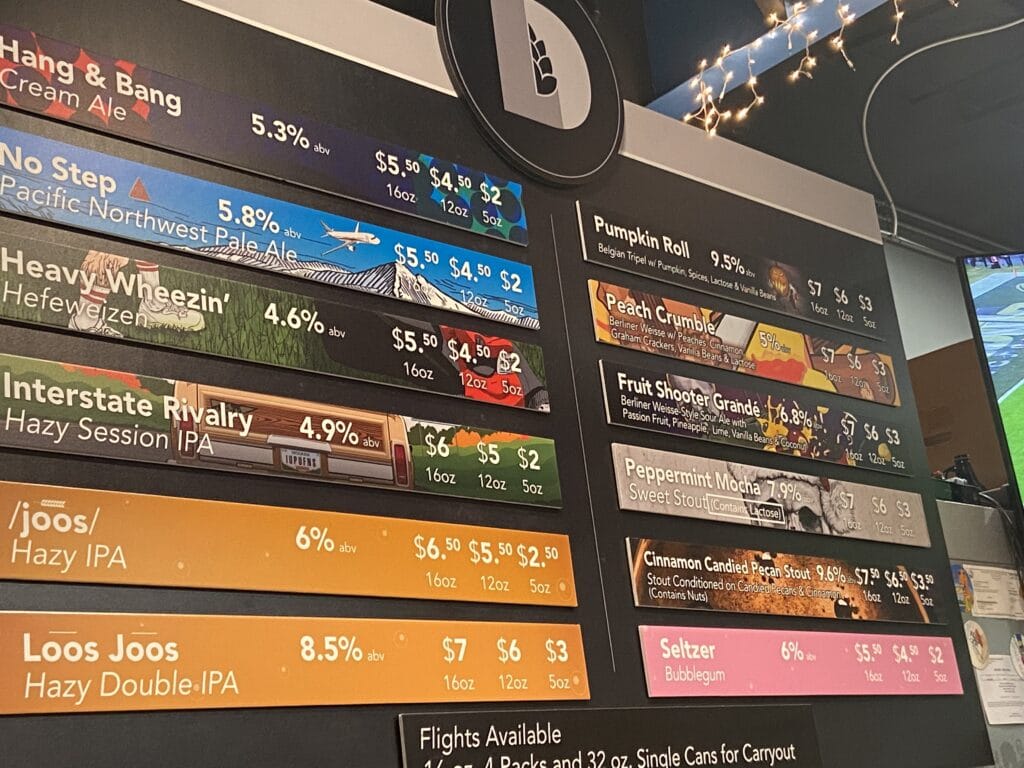 Only 3/10 beers that I would even *consider* ordering, and there’s another strike against the legacy drinker.

I dunno, it’s hard to swallow the current scene, and you can certainly dismiss me as an old man shouting at clouds if you choose, but what happened to beer?