From Prints to Pints 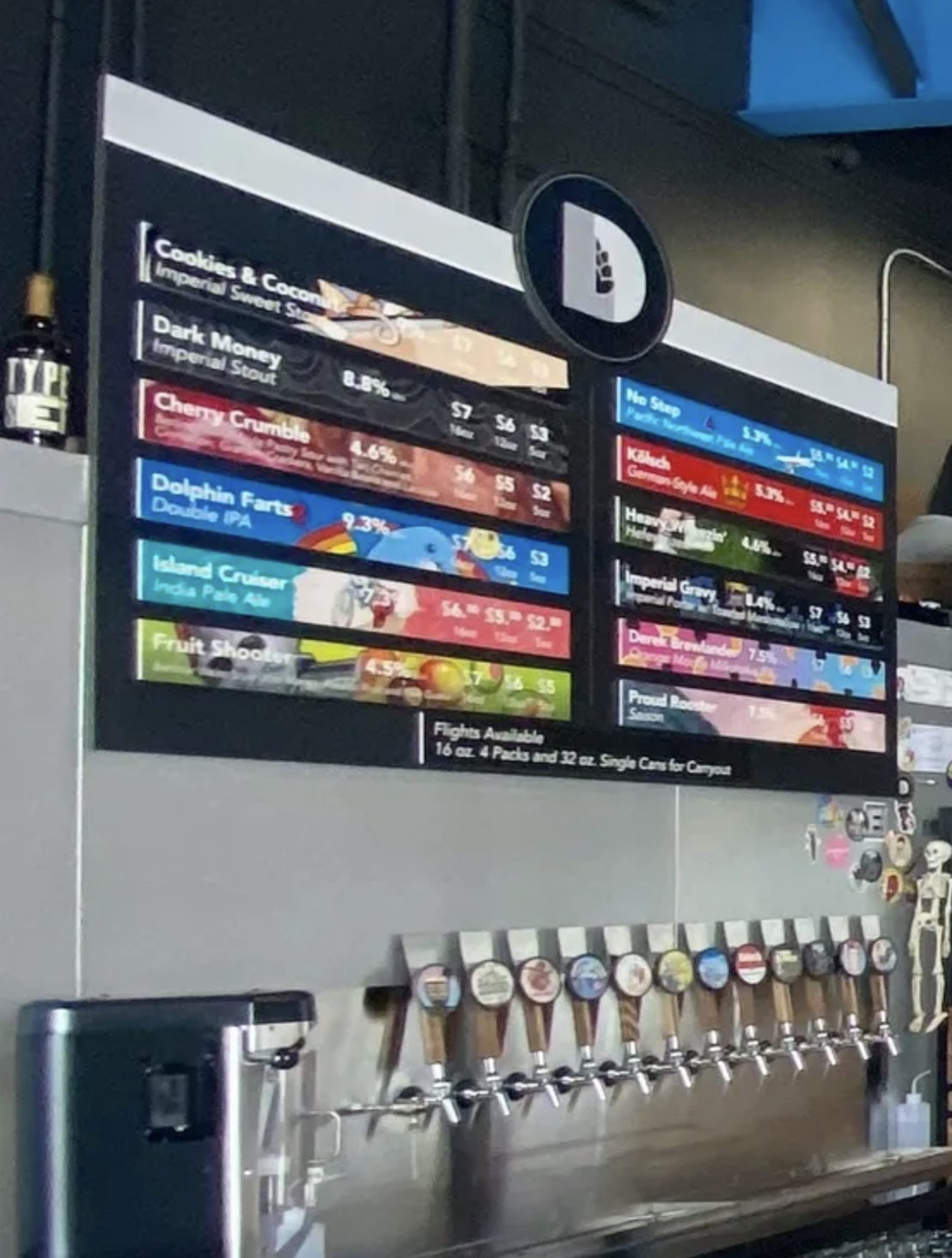 When one reads the draft list of a brewery that’s found in a tucked-away corner of an industrial park north of Fort Wayne, one wouldn’t expect the head-brewer and I to have much in common. Only 50% of the beer available (maybe even less than that) are things that I would likely ever drink. So on this, my third visit to Dot & Line Brewing Co., I enter with tempered expectations.

It turns out that appearances can be deceptive, and that the charming Phil Comparet (said brewer) shares my love of traditional beer. Phil and I sat down at the taproom with a pint last week, to chat about all things Dot & Line, and beery things further afield.

Some of the stories that Phil and I exchanged involved visits to Cantillon, and days spent in London pubs. I could see in Phil’s expression that Cantillon Kriek is a special beer for him, and that he was enamored with the pub culture that he found in England; in fact he stated both explicitly. Those were the first clues that the tap list might not necessarily be the best indicator of Phil’s beer philosophy.

Although Dot & Line is the new kid on the block in Fort Wayne – their one year anniversary is coming up on August 21st of this year – it turns out that Phil has been heavily invested long before his current project came to fruition. The journey to the opening of Dot & Line was fraught with classic, ‘two steps forward and one step back’ chicanery (more of that in just a moment), and goes back several years. Phil’s own beer education started at least of couple decades prior to that. It has its origins in being part of a friend’s wedding. As a groomsman, Phil was presented with a cooler full of ‘craft’ beer as a gift. At that time we were talking about not much more than SNPA, Pete’s Wicked, and Dixie Blackened Voodoo (remember those last two?), but it was a start.

His interested piqued, Phil soon moved on to homebrewing in November of 2007. Much like Tom Carpenter had mentioned to me previously, Phil described an exponential rise in his own, early brewing escapades. Starting with a simple extract system from (the now defunct) Brewer’s Art Supply store here in Fort Wayne, he had purchased a small kegging system before some of those very early batches had even finished fermenting! His friends and relatives were the beneficiaries of his initial work, and that’s where his passion began to grow.

An expert in Photoshop, and with a digital and print design background, Phil described the way that the satisfaction of seeing people’s faces as they were surprised by the quality of what he could brew, began to turn him to thinking about making a move toward a new career. Of course, as Phil acknowledges transitioning from a being garage based homebrewer to a commercial grown up one is tough. Even for the ultra-enthusiastic and mega-talented, that road is also filled with financial, practical and many unanticipated pitfalls, and his journey was typically bumpy.

As he began to talk to his print shop colleagues more and more about beer, including handing out samples of his handy-work, and introducing unsuspecting macro drinkers to Hoptimum, word began to spread around the building. Some of the people that got to know about Phil’s brewing exploits were the owners of the company that he worked for, Excell Color Graphics. These folk were perhaps the most important of Phil’s admirers because they had the capital to back the idea of creating a brewery. Not only that, they had the space. Part of the office and print shop space that existed on Camino Court was under-utilized, and all of a sudden there was one of those serendipitous, “planets aligning” moments; brewer, space and investors at the same place, at the same time.

If truth be known Phil needed a little persuading. Things precipitated one day when he arrived late to work. Phil’s boss came down to see him and asked if had time to meet for lunch. Nervously Phil agreed, and what followed that day was the truly the origin of what Dot & Line is today. Phil tells the story of five people piling into a car, and heading up to Dark Horse in Marshall, MI, where over lunch and a few beers, the plan was set. Dot & Line was to become a real brewery – an actual brewery with Phil at the helm.

In early 2017 he got a pilot system together and started to give away beer in a more structured way. Festivals, friends, colleagues and customers of Excell got to know the beer before things were formally underway. The feedback that Phil received was crucial to the early plans. By 2018 Dot & Line was ready to go on to the construction phase, but misunderstandings between the beer people and the original construction folk caused all manner of delays. A literal change of plans in terms of the space, and various re-thinks about what would and wouldn’t be possible in the building followed. In the two year period that followed early 2018, it sometimes seemed like things were destined not to happen, but finally construction got underway in January of 2020 … and well, you know the rest!

In retrospect, and it should be stressed that these are my words not Phil’s, my guess is that so much meticulous planning had gone into the brewery by the time COVID hit, and so many obstacles had already been confronted and overcome at that point, that the disruption of March 2020 forward may have seemed like just another problem to solve. That’s how it seems things are at Dot & Line to be honest. (A great example of that was how they pivoted in the early days to have such large part of their sales unexpectedly tied up in the take-out market of cans and crowlers. A completely unexpected part of the original business plan). Anyway, whatever the challenges were, Dot & Line Brewing Co. opened its doors officially on August 21st 2020.

As I mentioned above there’s a decent amount of beer on the board at Dot & Line that doesn’t interest me, and frankly never will. A hard seltzer, a milkshake IPA, a NEIPA, and three fruited, kettle sours all make appearances, but so do some really solid, traditional beers. A cream ale, a wheat, an American pale, and a couple of very nice examples – my favorites on my  visits – of an American Porter called Ghoul’s Gravy (my go to), and King Cognac, and a sensibly oak-aged oatmeal stout. A deeper discussion with Phil reveals his true love of traditional styles, but of course also has him freely acknowledging that running a commercial brewery in the USA in 2021 doesn’t allow him carte blanche. What Phil and I may want to drink most of the time isn’t necessarily what the youthful Fort Wayne craft beer market will support, so needs must.

Without naming naming names, Phil also has some strong words about the potentially very significant problems that fermenting fruit in sealed cans poses, both in terms of health and safety, and the important work of preserving a traditional beer culture – suffice to say he’s not a fan of smoothies/slushies – YES Phil! You and I are kindred spirits after all!

Looking ahead Phil agrees with Tom Carpenter that Fort Wayne has room to grow both in terms of capacity, and of course in terms of beer appreciation and knowledge. Like me, he’s really interested in funk and sour, but he’s very wary of getting into a spontaneous, truly wild fermentation situation in such a small, enclosed singular space like Dot & Line. For now, anything sour is going to have to be just a simple, kettle job, but don’t be surprised to see Dot & Line brewing some really great examples of other, traditional styles very soon.

In short, this guy thinks deeply about his beer, has a commitment to it, and I like the cut of his jib. He’s got a handle on tradition, and given the chance I think you’ll see him produce some seriously good, traditional stuff without fruit or other adjuncts in the future. I for one am keen to see those particular beer presses roll.