Me on (in) Draft (Magazine)

Last Wednesday I received an email from Chris Staten. Chris is an editor at Draft magazine. He asked me to respond to a few, simple questions about my public beer persona for an article that he was putting together. I didn’t think much about it, was happy to respond and help, and shot-off some quick answers a couple of days later. Given the relatively trivial nature of the request (and my associated fairly simple response), I was more than a little surprised to see his article on Monday of this week. It was completely dedicated to me and what I have to say about beer.

I don’t know Chris, and in fact the only time I had ever encountered him was when he wrote a Session 79 post when I was hosting earlier this fall. When I read that post of his I wasn’t that impressed, and I said as much in my round-up post. Draft magazine has also been off my radar for a number of years (over 6, in fact). I only ever bought one copy of the magazine, the Jan/Feb 2007 issue with Mike & Mike on the cover. I still have that magazine, and I dragged it from the depths of the bookcase to check to see if my memory is as good as I think it is.

I seemed to remember vowing not to buy Draft again, since in my estimation it was a lifestyle magazine for young men, and not a serious beer publication for people of my age or my level of interest in beer. A quick glance back at the issue that I own, made me realize that my memory is just about perfect!

Rather than a serious beer article being featured on the cover, we get Mike & Mike. On page 15 we have this (that) months ‘Draft Lass’. The delightful Amy Jo Kurkendall (23) is featured, shall we say ‘prominently’. Now, don’t get me wrong, I’m as big a sucker for a pretty girl as the next man, but this lady and her chest is not something that I want in my beer magazine – there are other publications that one can purchase if that is what one is looking for. Following the delightful Amy (who certainly is delightful), we have articles on Après Ski, traveling in Vietnam, top 10 places to have a beer, a golf tournament, Kitboarding (an extreme sport, apparently), pizza, Mike & Mike from ESPN, Cowboys (and other ‘sexy’ jobs) and a guide to adventure. All of these articles have relevance to beer ranging from zero, through spurious, and ultimately on to weak. I like Mike & Mike and Amy has some obvious charms, but in 2007 Draft was most definitely not a magazine dedicated to beer – I dropped it and never picked it up again. In 2007 I was in in my early 40’s, and I would guess that even then I was about 15 years past their target demo. I have no idea if things have changed over at Draft.

So what about the content of this particular article in December of 2013? 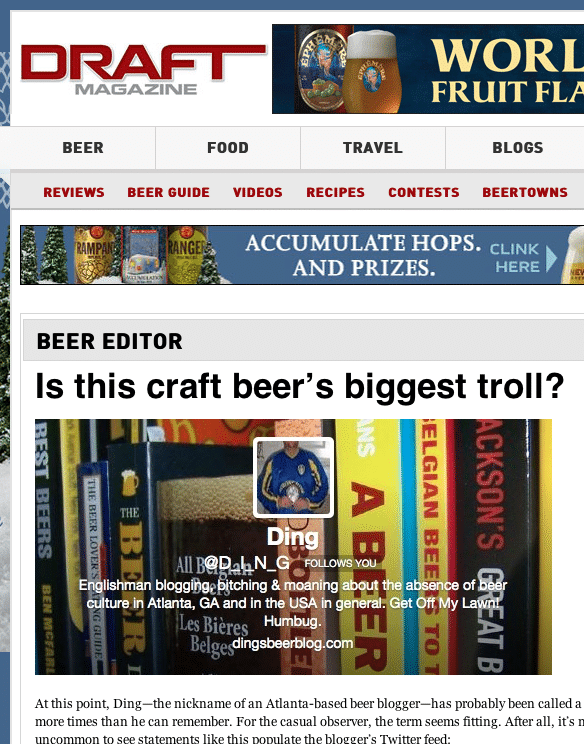 Well to start, the title bugs me a bit. As I have consistently said over the years (and mention in the last part of the ‘interview’), there’s really only one thing that bothers me about ‘feedback’ that I get on my opinions, and that’s being labelled a troll. I ABSOLUTELY am NOT, and I believe all that I type – passionately. In that respect, I find the title aggravating. Chris is not really right in saying that I’m, ‘trying to preserve an English beer tradition’, either. The truth is that I’m simply trying to stop the ignorant misuse and misrepresentation of the same –  I think that there is a difference. English beer tradition will be preserved in its correct place – England! I also reposted the ‘Women in Beer‘ post a couple of weeks ago.

Outside of that there’s not much else there. I wrote half of it myself (with my answers to Chris’ questions), and he is fairly faithful to them and largely accurate in most that he says. I certainly do embrace the Curmudgeon label (but NOT just for the sake of it rather it’s because it’s an accurate one).

Over the years I have found that there’s a pretty decent chunk of people that agree with me on many issues, but it’s sometimes difficult (for whatever reason) for them to agree with me publicly. Either way, nothing is gonna change around here.