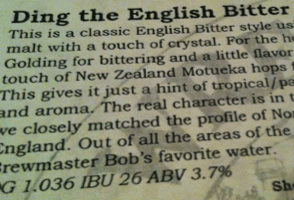 I have not spoken to Bob Sandage about ‘Ding‘, so I cannot comment on its origin with any degree of certainty, but here is what appears to have happened.

Recently Bob went to England for a short visit where he was exposed to some classic, English Bitters. His trip happened to coincide as our argument/discussion about the characterization of cask beer in America was coming to a head, and as a result of those two events, he decided to brew Ding, The English Bitter. If that’s inaccurate, my apologies to Bob and I invite him to chime in and correct me. 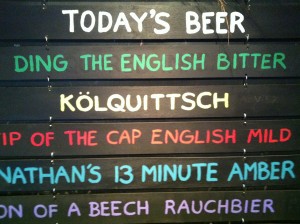 Ding on the board

Lots of people have asked me how I feel about Ding. Is it a compliment? Is it a gentle jab? Is he mocking me? Am I flattered? Am I insulted? In truth I have mixed feelings. I suppose it is nice/important to be recognized as forming some part of the greater Atlanta beer community, but in all honestly, if the abuse of cask ale continues in the US, then frankly I have no use for such things. For me, any discussion about Ding isn’t really about the beer itself, rather it’s about a whole nation being misled about the nature of cask beer – the fight goes on.

As we continue to fight over this, somebody (not sure if it is Bob or not) using the Wrecking Bar Twitter account said;

As people that really know me understand, this is not a trivial matter for me. A cultural connection to what amounts to a fundamental part of who I am, is obviously something that goes deep, and the gross, and IMO abusive, mis-characterization of cask ale in the USA, is something that I take personally. It actually makes me sad – LITERALLY. 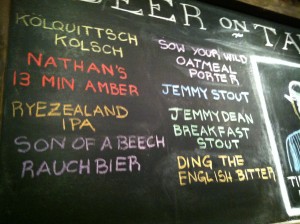 Ding on the wall

OK, back to Ding, the beer. It should be noted that these notes are on the keg, NOT the cask although I was offered a ‘blood orange’ infused (cask I *think*) version, which I rejected out of hand, found ‘offensive’, and it has to be said somewhat spoiled my Ding experience that day.

The pour is a slightly disappointing one. It resembles what has come to be know as a ‘Golden Ale’ in the UK in recent years. To be honest, I am a little out of touch, but the rise in the popularity of the Golden Ale ‘style’ at home seems to have taken place only in the last 10 years or so. To me, the Golden Ale genre has all the hallmarks of a ‘dumbed down’ bitter, perhaps using the lighter color and the word ‘Golden’ to attract drinkers that would otherwise not be especially interested. A UK version of a beer marketing campaign. I intend to get to the bottom of Golden Ales – emails are in to those in the know. 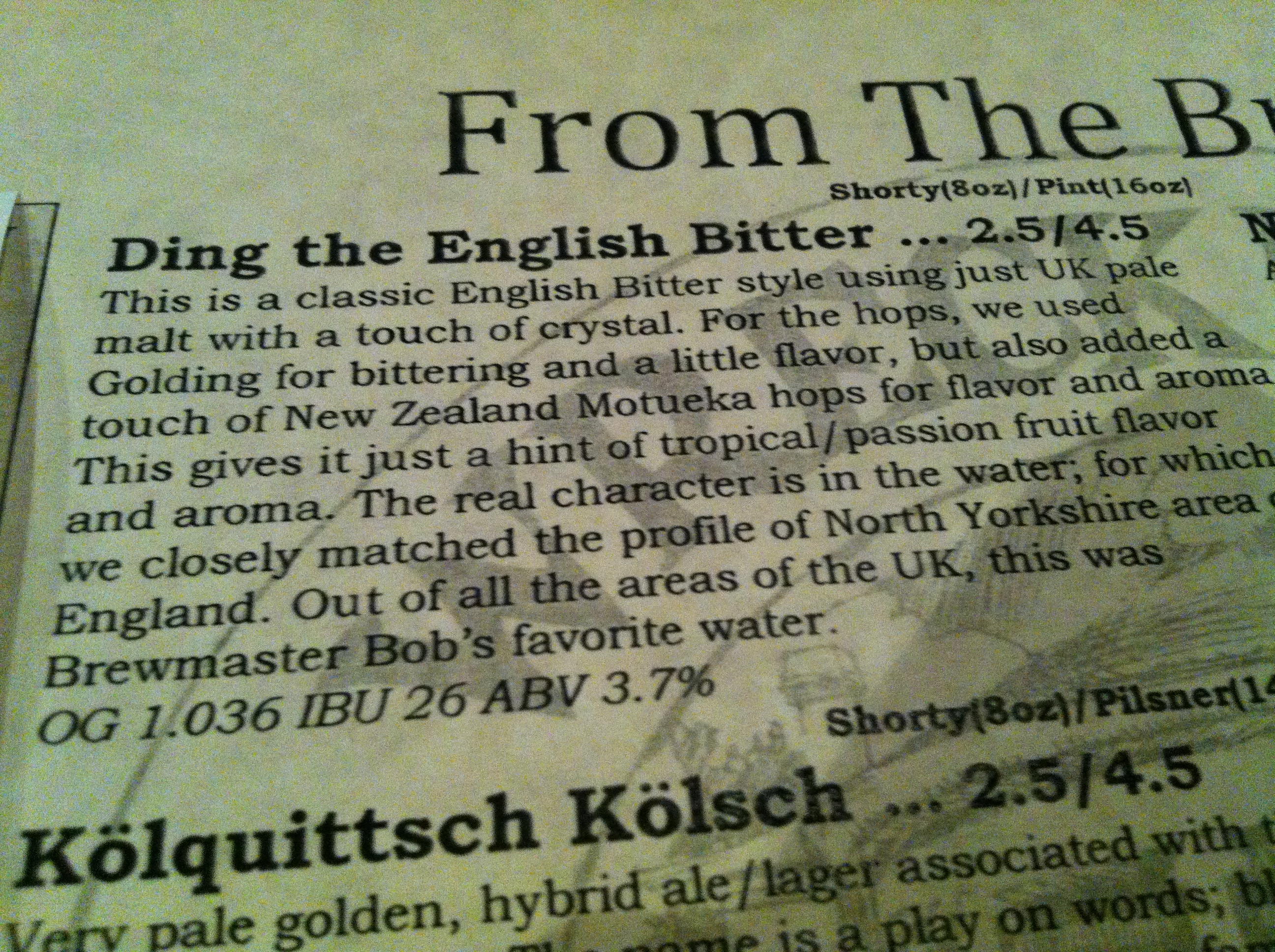 Ding on the menu

A light, golden orange body, with some wispy head and a little, scant, watery lace sits underneath virtually zero head.

No significant aroma based on the initial temperature, but happily this changes with time and with warmth, bringing some simple malts and a gentle grassiness. First tastes offer some very light biscuit notes. The beer breaks nicely across the tongue. Light, but decent jabbing bitterness at the edges and at the rear of the tongue. The biscuit nature is a crucial part of any beer even close to this genre, and there is what I would call a sweet version of Digestive biscuits present. It’s not classic, but it’s definitely recognizable and pleasing. Moreishness, another crucial quality in a beer like Ding, is also there. 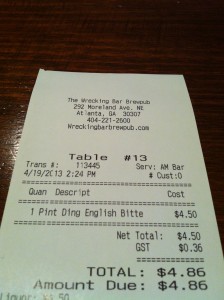 Ding on the tab

Aftertastes are quite dry (surprisingly so given the initial flavor), with a little metallic, copper coinage going on. Having said that, the dry character and the lingering notes come and go, and seems to be alternately more round & biscuity, then conversely more grassy & dry – a little odd, and I cannot quite get a handle on it. The beer feels a touch organic to boot, with a whiff of hay here and there. Like most beers of its type, it would take days, weeks, months or even years to get fully acquainted with, and to ultimately fall in love with, but after this initial meeting I would be happy to go on a second date – I hope that I get a chance to do so in the future.

In the final analysis this isn’t bad at all, and I’d happily drink a few more pints without complaint. I’m not sure whether I should be flattered or insulted, but I guess the truth is somewhere in between. As I say above, the principle is far greater than the gesture (good OR bad) or even this particular beer. Ultimately, I feel indifferent to the whole saga but not to the plight (and I use the word deliberately) of cask ale in the USA. 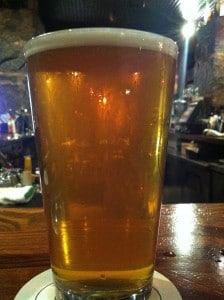 Ding in the glass

Batch #2 –  an amalgamation of reviews from the brewpub, and two separate 32oz growlers (with another to follow) from @GrowlerTime in Tucker, GA (which I assume is batch #2).

The color sees what appears to be a significant change for the better. There is a really distinct copper hue that was not present in the initial, yellowish batch. The pour needs to be quite an aggressive one in order to generate the kind of head that I would like, and it is pretty light and wispy, but no matter, it still does a sufficient job consider the growler delivery.

All of what follows is of course, subjective, and relies upon my initial notes and memory. As we all know, beer can be notoriously deceiving to the palate from one tasting/batch/situation to the next, and I am aware of possible inconsistencies in my assessment. This is my best effort.

There are still some drier notes, and what feels to me like a greater mineral element in the beer than the first tasting. The back end and aftertaste definitely deliver a more bitter element than perhaps a classic in the style, and it is much more reminiscent of an English IPA than an English bitter if one considers the beer, backwards. Tasting it forward, many of my initial thoughts remain the same. It’s a very passable beer in the style that does a pretty good job of replicating the things that I miss terribly. As I say, the mineral element seems higher in the second batch to me, and that, with a perceived extra bitter punch in the finish, nudge it a little way away from where I would prefer. The first batch seemed to have a greater biscuit element and a slightly more moreish quality which is absolutely crucial in a beer of this genre. I think the beer needs to be a touch ‘maltier’ than batch #2 shows. That’s not to (necessarily) say ‘sweeter’, but a bit of the moreish nature that was present in batch #1 seems to have be lost. It’s missing a tiny bit of its original body for me.

Perfecting a subtle beer like this takes time, and I think that batch #2 has corrected the color, but perhaps stepped away a little from the malt roundness. Batch #2 is clean, but with it comes a touch (and it is just a touch) too much hop bite and a green-edginess that has to be evened out with rounder, more digestive notes. It’s OK, this is NOT an entirely linear process, I understand that, and I think that ultimately this will get to where it needs to be.

In summary, one step forward and maybe one-and-a-half backward, but that’s OK. I believe that Bob is committed (at least in the short term) to tinkering with this, and the fact that he has got as far as he has with this beer and this style, suggests that in the end he’s going to nail it.