Pour is a, ‘per the label’ dark bronze color with some initially high head that fades pretty quickly. Retention is not great, and lace is essentially zero. Of course, the name is actually nothing to do with the color, rather a reference to using ‘bronze’ in the fermentation. I’m not at all sure what that means, but I suppose it refers to using bronze equipment rather than adding pieces of alloy to the fermentation vessels!!?? The label is ambiguous.

Nose has some amber, toffee malts with a certain light herbal quality about the aroma. 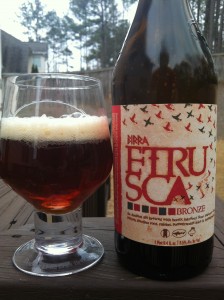 The herbal note is much bigger in the taste than the nose would initially suggest. Definitely a slight brown ale character about the beer that reflects the hazelnut. There is a definite fruity feel about the beer too, but in no way would I be able to identify it as specifically pomegranate. The nut and fruit elements combined lend the beer a slight sweet and sour character.

Quite rich in the smooth, with a full, round mouthfeel.

There’s quite a lot of fruity sweetness about this beer, and occasionally it gives a little hint of acidity as well. Some richer, more rounded honey notes appear quite frequently as well. 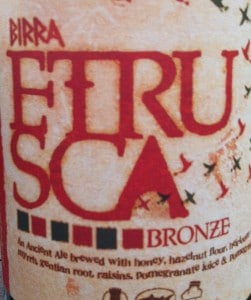 Alcohol seems quite well hidden. The herbal elements seems to come through more as it warms.

It’s a rich beer, that has some pleasing elements and is certainly interesting, but like so many of these experimental DFH beers it’s just far too expensive to represent good value for money, and far too big in the ABV department to make it any more than a novelty, one-off purchase. 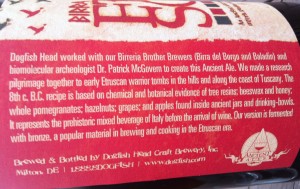 In the end this feels like not much more that an unsustainable experiment, as the beer market in the US will eventually have to experience a correction, where average tasting beer (this) will find itself out in the cold at $10.99 for the 750 mL. I’m generally a fan of DFH, but it has become far too common for a novelty beer to be ultimately, pretty average.