The back story to this beer is that I missed out on it when it was first released (late 2004), but subsequently enjoyed many of the other Jewbelation offerings. As a result, for many years this was on my ‘Want List’ on beeradvocate. It was after I had long given up hope of ever getting 8, that Shmaltz re-brewed and re-released it in the 12 oz bottle in the mixed pack almost two years ago. 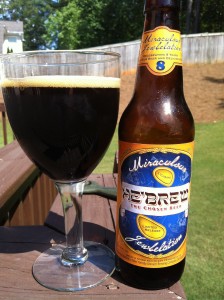 Essentially, a black pour with some brown highlights revealed when in strong sunlight.

Head is short and quick and fades to leave only a small collar around the beer. A small, milky slick of foam appears in the center of the body. The beer is still.

The nose offers some nice, sweet, malty raisins, exactly as one would expect. The Jewbelation series, at least these earlier ones, tended to offer no surprises in terms of what you were getting – high alcohol, sweet malt bombs were advertised, and that’s essentially what you got; there are no exceptions with 8. What did surprise (and disappoint me a tad), was the lack of mouth presence here. The beer is quite light in mouth (if not exactly ‘thin’). On the plus side this does add to the drinkability, but it’s not a heavy hitter in terms of body which is quite a surprise.

There are a few light licorice notes up front, but to be honest they are relegated to the finish and the aftertaste. The sweetness continues to come through, and any hints of highly roasted notes or distinct bitterness are either not there at all or are pushed away to a place that they become difficult to find.

This is generally categorized by folk as an American Porter, but the truth is that apart from the high ABV, the beer drinks infinitely more like an English Porter. It’s sweeter and more faithful to the contemporary English Porters than the (generally) much harsher American ones. If you approach this beer as a high alcohol English porter, then you’ll be stylistically happier.

My only regret is not getting the chance to try the 2004 original in all its 22 oz glory – maybe one day!