OK, what are the differences between this and Duvel? The question really seems as though it should be at the forefront of any discussion of Rustica, since it is being declared as Ommegang’s, “American Farmhouse interpretation of Duvel‘. Let’s just say that Ommegang had better be confident (and careful) about deliberately drawing comparisons in this manner, because they are opening up a whole can of worms if the beer fails to reach those dizzy heights! For me, it’s a high risk endeavor.

For a start Rustica seems slightly more viscous than Duvel to me. It’s certainly less golden and more yellow, and definitely less sharp and clean than the original. It also seems sweeter, generally more cumbersome, and less light on its feet. 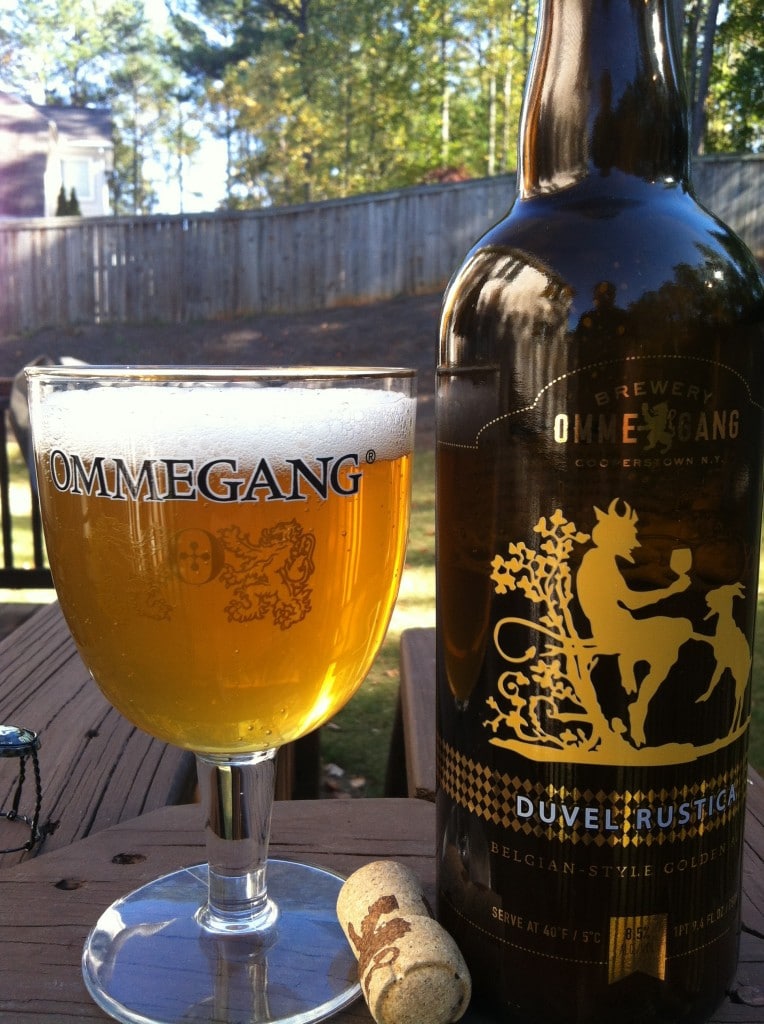 The head is not great, or well retained, or produces much lace. The body is an odd, hazed yellow color and does not look clear. The nose is strong with lots of fruity white pepper in the requisite amounts. The aroma is what seems closest to the original to me.

The sweetness and the alcohol are both very round and full. This is a bit of lumbering beer when compared to Duvel. Duvel is sharper, cleaner and delivers a taste profile that is definitely more well-defined. The body is definitely full, by the finish is nowhere near as dry as I was hoping. Strangely, it gets slightly watery in the finish, too. 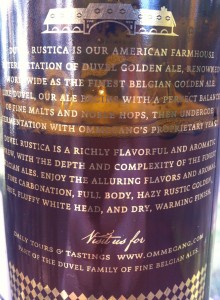 Plenty of alcoholic fruit here, but the yeasty white pepper drops off quite quickly. The yeast seems less than required, and this is another area where it falls quite a bit short of Duvel for me. 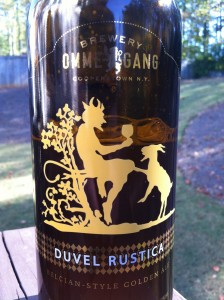 This is not as good as Duvel. Period. Maybe that was not the intention, but in a case where Ommegang has chosen to name it in the manner that they have, and then go to the trouble of making comparisons all over the place, then comparisons by consumers are inevitable and IMO, entirely fair.

Rustica is very expensive for what it is and it really is a bit of a pointless beer when you think about Duvel. Not sure why there needs to be so much apparent effort in failing to come up to speed. I don’t dislike the beer, but I am disappointed and feel this is a bit of a waste of time. Ommegang is better than this.

I dunno, I guess I’m biased. I’ve been drinking Duvel for a few decades now, and the images an experiences that in conjures in me of Belgium in the 1980’s I guess supersedes anything that Ommegang is likely to be able to do. I really like Ommegang, but I think that my final question would simply be, ‘what’s the point in cloning Duvel?’ Just another American experiment that I don’t really understand.