Always glad to see another De Proef collaboration, this one being the sixth in the series. Some have been great, some less so, but it’s usually pretty interesting – turns out this is no exception. This beer is a result of Alan Sprints from Hair of the Dog fame and Dirk Naudts at De Proef coming together. The beer is commercially described as a, ‘blend of a Flanders-sourced Lambic with a collaboratively brewed version of the famous Hair of the Dog Fred’. Bottle-conditioned, brewed March 2012. Corked & caged with a plastic (yuk) cork, with 10/04/14 dot-matrixed on it.

Pour is a dark golden, and produces a much larger and higher head than one might anticipate (good). In fact, the rocky, thick head with its retention and lace is really quite spectacular. The color is a mid-orange version of golden. 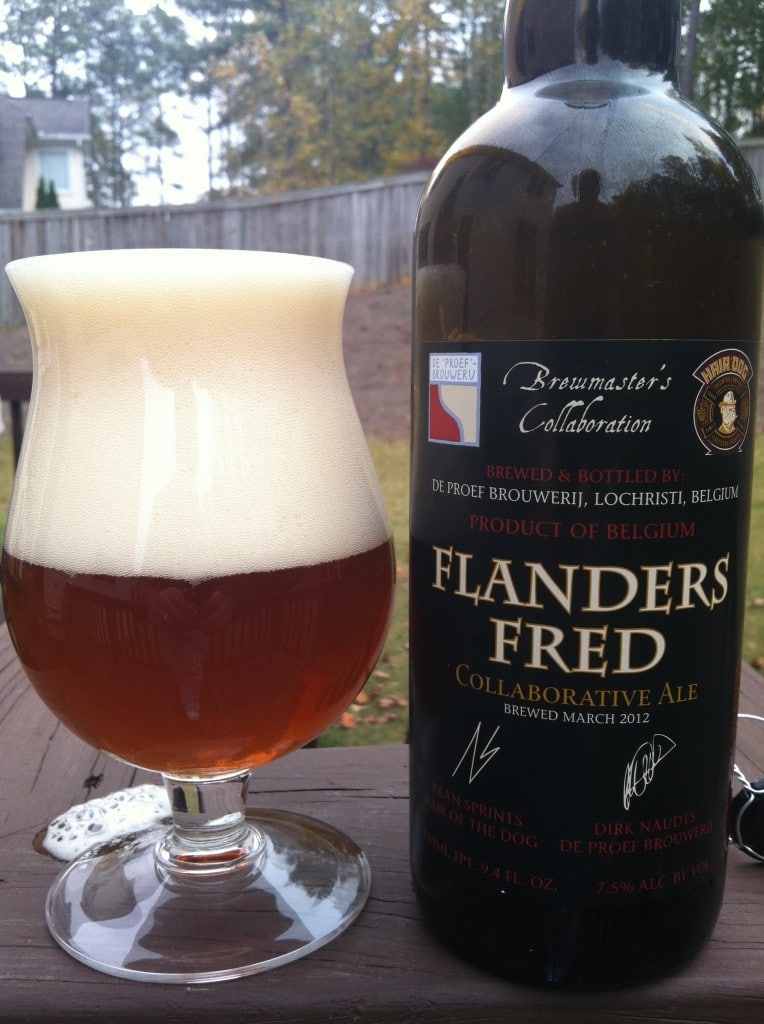 Flanders, ‘not a red’, Fred

Nose offers some light ethanoic acid and some wet cardboard. Any attributes of a beer being described in terms of cardboard is of course, never a good thing, BUT, within the style, it’s not too far removed from being what one might expect. My use of that word may be a bit alarmist, but I would tend not to worry about it too much, but it’s definitely in the frame.

Tastes are very conservatively sour. In fact, tart would be a better description as this in no way delivers any harsh vinegar elements. It’s quite round in terms of the taste, and it feels very soft in the mouth. The width of the mouthfeel and the lack of aggression is pronounced, but it works quite well. This is NOT a Flanders Red (just in case you thought it was) – essentially it’s a lightly tart Saison. In terms of the color and through to the nose, tastes and mouthfeel, it feels slightly funky and definitely has a farmhouse character.

I’d be tempted to call this an American Wild Ale had it not been brewed in Belgium, so for that reason I am going to call in a Saison/Farmhouse Ale. I know other places have it categorized in other ways, and in some cases this is understandable, but Flanders Red it ain’t. Style arguments will follow, including some candidates suggesting Belgian Strong Pale Ale, but I favor the farmhouse moniker simply because it suggests the move toward the tart and funky elements that form the backbone. 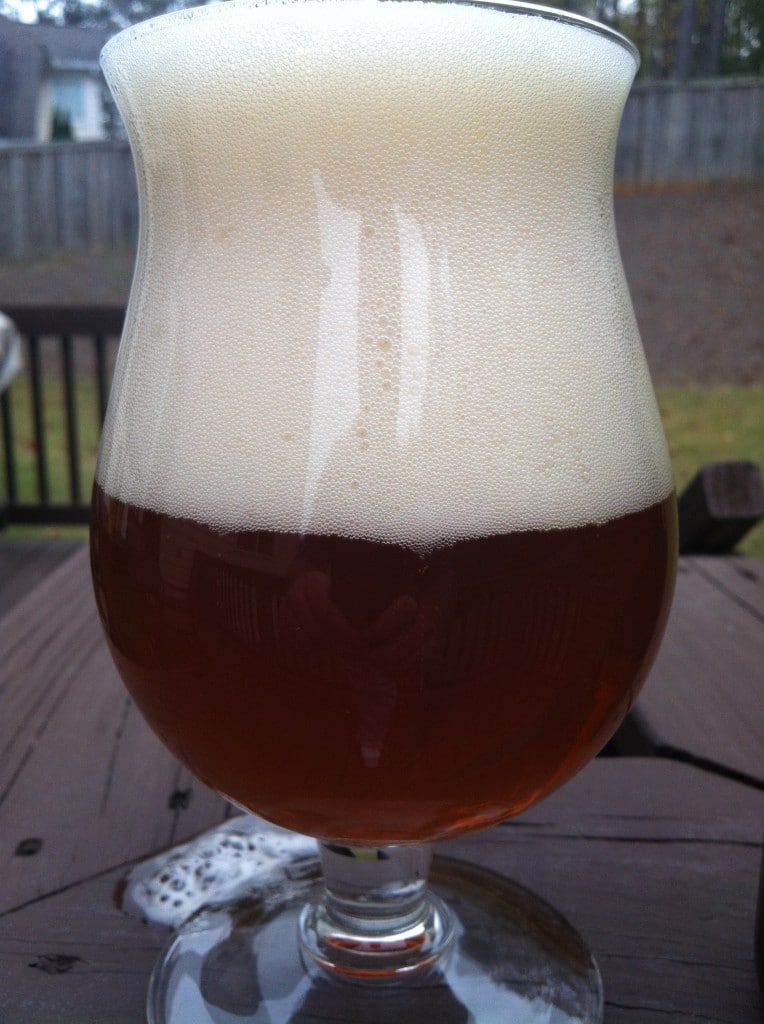 Complex in terms of the flavors present, the funk is light in as much as it does not avail itself in a big way, rather it’s a background element. Some lemony character comes through too. The finish seems to deliver some pleasing grapefruit which is welcome, but again somewhat unusual.

As the beer progresses it does get a little more vinegar-like, which I suspect is a function of it building and accumulating, and not as a result of this being especially acidic. The round, soft mouthfeel continues to work against the tart stuff. In fact I’d go further and even say that the tastes are getting increasingly ‘sweet & sour’ toward the middle of the bottle, and I detect some potent, aged, dry orange (a little like that particular citrus fruit being shriveled and way past its best) – there’s that light cardboard* again.

*Again, do not be too alarmed, but definitely a little oxidized character *seems* to be present. 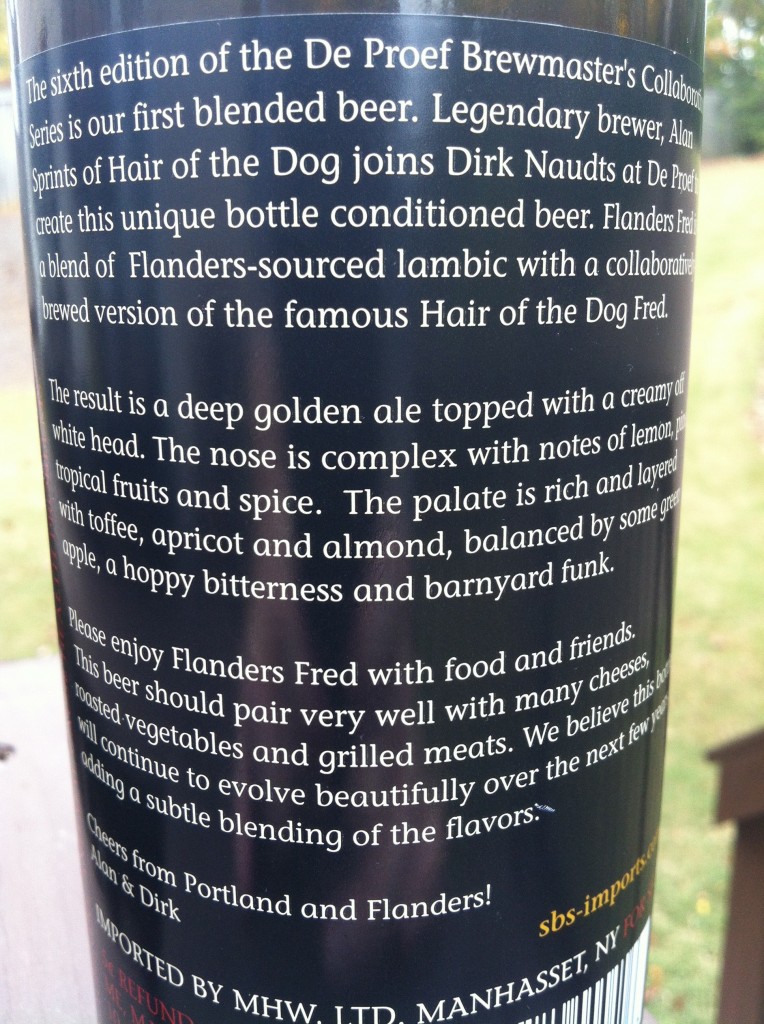 The label suggests some pairings that might work well, one of them being ‘many cheeses’, and I would agree. It also suggesting cellaring, and this would certainly be an interesting candidate.

Solid, interesting, complex and much to commend it, a beer of some character already.