OK, the last Stone Anniversary beer that I thought was any good was 13. That beer was superb. 14 and 15 I disliked strongly, and I thought that 14 was simply a bad beer.

That brings us to 16. Well, there are some conflicting signs (for me), right off the bat. Lemon, I like; Stone doing a DIPA ought to be a solid platform; Rye is generally an element that I don’t care for in beer.

Very attractive pour. The clarity and color are both outstanding, and the head is tremendous. Tremendous? Why? Well the density, retention and lace are all spectacular for a beer of this ABV. Those attributes are complimented by the bone white color. There’s no denying, this looks great!

Nose offers an interesting paradox of west coast resinous pine, and some distinct, bready malts – I wasn’t expecting THAT! Not much sign of the rye in the nose – for that, as a man who is not a fan of rye, I’m grateful.

The first sips are predictable. Large, slick, hop attacks that are resinous, piney and unrelenting in their delivery. It takes a little while for the lemon note to cut in, but it does, and it is very welcome. The combination seems to add a somewhat floral feel to the hop note. Things progress along fairly predictable avenues until the finish. This is where the rye kicks in a little. Typical peppery spice and bitterness. 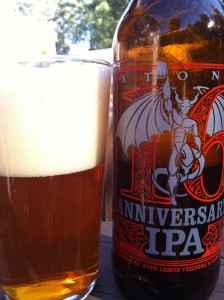 This is a beer that will induce some BIG, hoppy, burps, which oddly enough is a trait that I think is associated with a great DIPA. In that regard it wins. However, I’d happily swap all of the rye for extra lemon, but I guess until I have the privilege of brewing a beer for Stone, I don’t get to make that call!

There’s no doubt that 16th embraces the whole West Coast DIPA genre, so in that respect it’s a pleasing beer. I also like the lemon aspect, but the rye bothers me a little. That’s a personal preference of course, and no doubt many will enjoy it. Not as good as 13, but certainly a significant step back up after the disasters of the 14th and 15th anniversary beers. ’16’ is good, but this will probably be my one and only bottle of this beer. 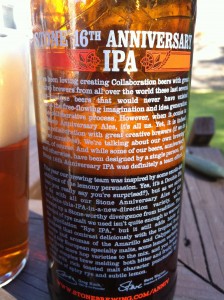