Frankly, I’m not a big fan of either rye or whiskey barrel-aged beer, so things don’t look good from the get go here – let’s take a closer look, into the Duvel tulip it goes. 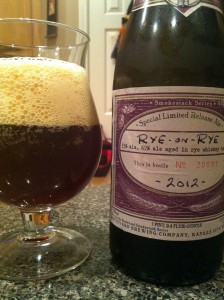 Rich looking, brown pour that is quite attractive. Some hazy, murkiness but some quite lively streaming carbonation. Head initially high, drops off quickly but there is a thin film. Tiny bits of lace, but not much.

Nose is quite strong in terms of the whiskey element. A few sinus clearing alcohol notes.

The tastes start out with some very sweet liquor notes that come through really strongly. The beer is round, but paradoxically smooth and slightly prickly at the same time. An odd combo, granted, but it seems to work well.

To be honest, the rye really doesn’t play a big part here, but I suppose that those with more rye whiskey experience could correct me. I say that because there is none of the peppery spice character that rye normally brings to beer, but more experienced whiskey palates might be able to dissect and detect more subtle notes that I feel is pretty much straight liquor. It all comes together surprisingly well and makes for a pretty rich, satisfying experience with warmth and depth. Also surprisingly, it does feel too overwhelming. 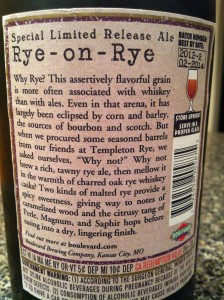 This is a surprisingly sweet beer with lots of residual sugar in the finish too. Although the beer ‘tastes of alcohol’ (because of the whiskey aging), it drinks much lower than the advertised 11% would suggest, in fact the alcohol is extremely well concealed.

In the final analysis I am amazed by this! I would never have thought that I would have liked this to the degree that I did, and it was a delightful surprise. One of the more interesting beers that I have drunk in a little while, for reasons that I was not expecting. 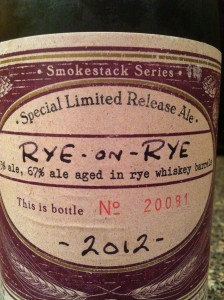