Anything involving Alpine in the DIPA category usually gets my attention, so I was interested to see how this would pan out. The last New Belgium collaboration that I tried (Brett Beer, with Lost Abbey) was woefully disappointing, so I am hoping this is better. Turns out that I need not have worried.

The usual Lips of Faith presentation, but this artwork is a little uninspired to say the least – looks like my 11 year old did it.

Golden body with a little chill-haze and a rocky, white head. Sticky lace as expected from a beer that has all the hallmarks of a West Coast DIPA and excellent retention. 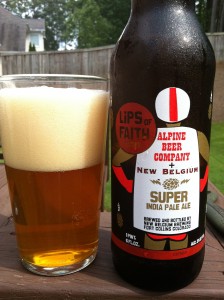 Nose gives a blistering, earthy hop attack but one which is cleaner in the taste that one might have initially thought. Some onion elements.

Oodles of orange marmalade greet the tongue with wave after wave of Sevillian-like goodness. The orange, tangerine and satsuma notes suppress the piney nature of the hops. Obviously being a West Coast influenced DIPA, there’s plenty of oily references and pine elements, but the beer remains outwardly fruity for me. As the bottle is consumed, the tangerine notes start to give way to more grapefruit bitterness – a harsher citrus – but it never gets truly bitter, and the hop assault is drenched in fruit sugars. Definitely a hint of alcoholic, hop infused Lilt, here!

There’s a small, slick, oily feel but it is not pronounced, at least not in the same way that some west coast examples of this style can be. Round, bready malt notes hold the whole thing together nicely. I get some floral character late on as well, and these build a bit over time.

Pretty big, but to be honest, exactly as expected. No frills here and no punches pulled, it feels authentic and uncompromising. Certainly reminiscent of Nelson, but that may be my imagination.

Considering both the ABV and the style, this is really quite subtle. Tropical and relatively soft, it still delivers all that you would expect from the west coast, despite being brewed in CO. Alpine’s influence seems bigger than NB’s in this beer – I think that’s a VERY good thing.