I ran into a cacophony of new Mikkeller offerings in the store last week, with all kinds of weird, strange and expensive beer on display. I don’t rate Mikkeller much, and their general loud posturing and ferocious, indiscriminate output tends to put me off as well. Add in the fact that the majority of their beer represents crippling bad value, and you could call me a fairly serious skeptic of their work. Here’s what I tweeted last week.

The label here doesn’t offer much information in terms of the style, but the words ‘Open Windows’ had me thinking spontaneous fermentation. ‘Tiger Baby’ had me thinking oriental, floral notes. All of that, coupled with the moth motif, and the fact that mango and passion fruit were involved, had me hoping for a farmhouse/saison type beer with perhaps some floral, sour or funk elements. It was all pointing in that direction, even to the point of opening the beer when a large fruity whiff jumped out of the bottle. Things changed direction as soon as it was poured and when I found out that Open Windows, Open Hills is actually the name of an album by the Danish band, Tiger Baby! 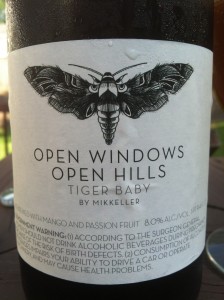 The beer pours a quite dark orange color with some significant haze. A modest, fizzy, light white head. Retention is below average and the lace is thin and unimpressive. What I first think might be a big fruity beer, quickly drops back into a more obvious, straightforward hop affair. I’m disappointed. Essentially this is a slightly dry, American Pale Ale that threatens to be fruity but never pulls it off. In fact, the dry element is stronger down the bottle as we go, and is surprising given the fruit input. Some light citrus and perhaps a touch of tangerine in the finish, but mostly dry. A little earthy.

A little thin body, and not much presence. On the plus side the whole beer never gets intense or demanding, so in that respect I quite like it.

There are a few IPA hop notes that break through from time to time, but this beer never really gets off the ground. It’s an interesting label, an interesting name and has some interesting ingredients; in that respect it’s surprising how uninteresting the beer turns out to be. 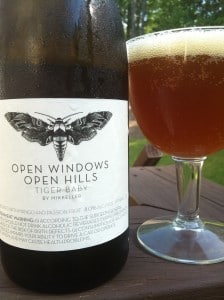 $11.99 for the 750 mL bottle is dreadful value, but to be honest that is the one hallmark of Mikkeller that one can pretty consistently rely upon.