If truth be known I have a bit of a soft spot for Mother Earth. The reason is simple. Although I don’t pretend to know Josh Brewer (the Brewer) at all well, I did have the privilege of meeting with him a few years ago shortly after he had opened his brewpub in Beaufort, SC. On that visit I brought him a few beers and he looked after my family and I very well. That was a beautiful building, and I was so sorry to hear of their ultimate closure. I enjoyed Josh’s beers, and was not surprised to see things take a turn for the better for him with Mother Earth. Anyway….

2010 vintage (bottled December 2010) and given to me by one of the guys at Duckworth’s in Charlotte in March of 2011. Sorry, I forget his name since my BA demise.

I’ve had this beer once before, but this is the first formal review and tasting. Healthy pop on the corked & caged bottle.

Pour is standard jet black, but in excellent, natural light, the head is a true mocha, almost orange color in the glass. The foam thins out to give a classic, spotty film. 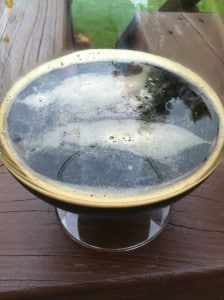 Nose is quite big and it produces some nice liquor notes. Some pretty big, solvent alcohol character is there too, but it is fairly well controlled and rounded. The big Terrapin snifter catches lots of solvent aroma and throws it UP the nose!

The beer has a slightly smokey element. Not at all large, but a hint. The biggest (initial) taste that I get is one that is reminiscent of a Harvey’s Bristol Cream Sherry. This lingers, and although the beer is much more bitter than that particular drink, it is definitely a recurring feature in the taste.

Carbonation seems a touch high even at this stage of its life; a little prickly. At the bottom of each small pour into the snifter it seems a LOT sweeter than it did up front. There are still a few charcoal notes, but there is plenty of sugar, almost molasses like elements. 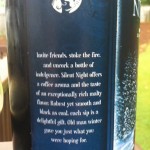 Easy drinking, smooth and well-balanced, when younger, this was more aggressive, but now it is now nicely mellowed.

It’s a nice example of the style with a fairly subtle feel to it. Hop character is low, and the alcohol relatively well hidden. In addition to the sweet notes, the sherry element is one that I really enjoy. This style of beer is never going to be a favorite of mine, but the combination of flavors works nicely for me and the bourbon is a backseat element in this, aged example.