A quick look at the description of this beer has me interested. ‘Ale brewed with ginger and with green tea added‘. Ginger and green tea are flavor profiles that I enjoy, but of course these are usually best in lighter styles than IPA’s (especially when considering heavy, overbearing American versions) where they can impart their subtlety, but still shine through. IPA seems like a poor match to me, so it has me slightly worried from the start. 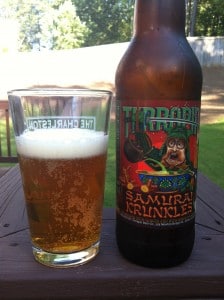 This was such an utterly bizarre experience on the first bottle, that I had to take notes on two separate tastings.

Nose gives a very mild malty sweetness, and some light, but cleansing hop aroma. The clean lines of the nose are the best feature, and I suspect is founded in the clean, well defined sharp elements of the ginger, green tea and Sorachi ingredients.

OK, in a nutshell, something has gone HORRIBLY wrong here, and it’s not a clash of ginger and green tea that was worrying me initially. This beer is UTTERLY one-dimensional, and that dimension is BUTTER. 100% diacetyl, NOTHING else. Truly awful. It’s actually to the point where I am questioning my own palate, and despite the second half of the bottle being a drainpour, I am actually going to buy more of it to confirm. Right now, I barely believe my palate.

Butter – nothing else. The image below was rather cleverly put together by Scott (@beerbecue7). For those you not familiar with the lady on the label, that’s Paula Deen who is a Southern, TV cook, renowned for her liberal use of butter. 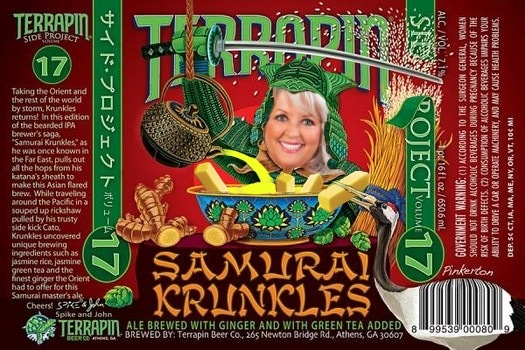 Interestingly, here are Scott’s thoughts on the beer.

Here’s the real label, but Scott’s version seems more indicative of the contents. 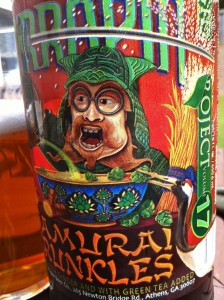 Second tasting – Better (but then again it could not have been worse), but still with distinct, diacetyl-like, butter elements. Still could not drink the whole bottle, and I am a very, very infrequent ‘drain pourer’.

There is a very slight aftertaste that I suppose is somewhat related to the ginger and green tea, but there is no way on earth I would expect anyone to peg it specifically as such. For me, the ginger, green tea and other elements are just not strong. The Sorachi is not prevalent either, in fact, in terms of really distinguishable tastes, the only thing which came through on each occasion was vicious, unrelenting butter on the first run, and softer, not as bad butter on the second. Sorachi Ace is a hop character that I cannot really get to like, but in this particular beer there isn’t much of an issue since it doesn’t come through – for me, a good thing.

I really don’t know what’s going on here, I really think there is something awry with this beer.