Presented by both Dogfish Head and Dan The Automator (whoever he is), this has farro, cayenne and cilantro added. I like me some cilantro, so I think this has potential.

It also has a label with DELTRON 3030 emblazoned on it – another thing that without the help of Google, I have no clue of its meaning. I know this is part of DFH’s music series, but I also have no idea what the Positive Contact song/track/album is. Frankly, I’m rather glad.

I was a little concerned with this beer since I definitely didn’t want to experience a cider rather than a beer. Mixed comments on this, suggested that some people think is IS cider like, and some don’t. Being born and Bred in Devon, and having lived very close tot he Somerset border for a long time, I just don’t want anything to do with American ‘cider’ – I figure that it is BOUND to disappoint. Anyway, back to the beer. 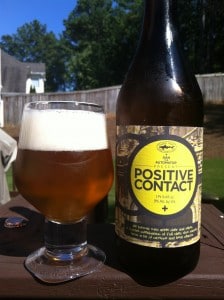 Pour is a beautiful golden body with great clarity. Very nice, creamy, fine bubbled head, and some creamy, semi-thick lace results. The DFH signature glass produces some great sites for nucleation, and the beer looks lively and bright.Nose has plenty of esters and some drier phenols. The ester fruit comes through strong, but not in a green apple way. The nose is rich and fruity and gives some pear and pineapple as well.

The tastes are a little drier than the nose would have suggested. The feature here is a yeasty, estery fruit, plenty of alcohol and this beer seems to drink pretty much like a Tripel. I don’t think I would classify this as a fruit beer at all, and it gets drier and drier down the bottle. There’s a decent phenol element, and the alcohol comes through splendidly. Definitely much more Belgian Strong Pale Ale and Tripel notes than fruit – I am glad. With further nods to the Tripel style, we get some white pepper and an increased bitter punch in the back end. 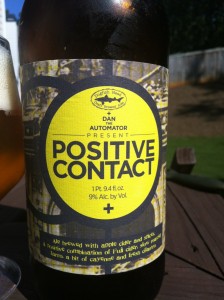 As the beer goes down the 750 mL’s, the alcohol continues to build but that’s not really the problem. There appears to be an increased syrupy sweetness, and the viscosity appears to build quite a lot. This makes it a little heavy going at the 500-750 mL portion that was not evident upfront, but it still taste great. The beer seems to drink must higher than the suggested 9%, and normally that would bother me a little, but for me, on this occasion, it seems to sit well.

There really is absolutely ZERO, AUTHENTIC (i.e., Southwest of England) cider character here, and that’s just perfectly fine with me! I didn’t want it, and I didn’t get it. A big beer, with plenty of alcohol that hits hard but in a very tasty way. Good.

Having looked up ‘Dan the Automator’, Deltron 3030 and Positive Contact, I’m pretty sure that I’ll like the beer better than the music. That was not the case with Bitches Brew.

Other: 9.0% ABV. For ME, this is basically drinks like a Tripel, although others classify it as a fruit beer.