Curious that a brewery would pay homage to a Bière de Grade by naming the beer after the scene of an EPIC French defeat, but……

Mid amber pour in strong light gives some deeper red tones. Attractive colors. However, head retention is poor, and leaving zero in its wake. Not really too much of a problem given the style, but I would prefer a little more of a nod in the direction of head. 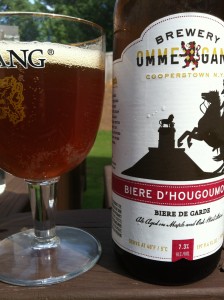 Nose has a little yeasty fruit and some alcohol. Fairly reserved.

Big rounded tastes of malt, with the oak playing  a bigger part than I would like. Definitely a hint of vanilla even if it’s not large. The complex malt certain comes through big and strong in the taste, and the label boasts an impressive eight varietals.

The vanilla notes grow, and for me this is not necessary. They tend to subtract from the rustic, earthy elements that should make up the style IMO. The advertised Strisselspalt hops (an unusual variety in American beer to say the least) are appropriately, relatively reserved in terms of their presence in the tastes, but also lacking ab it in their usual role as aroma enhancers. The carbonation seems a tad low, but this is not some much of a problem as the oaking for me. I get no maple in nose or palate, which as far as I am concerned is an absolute blessing! 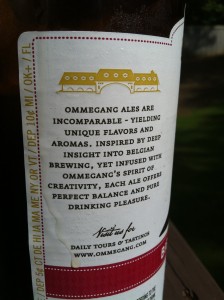 Obviously (and correctly), a malt influenced style, this feels authentic if it not for the vanilla pushing through. Don’t get me wrong, this is not a beer that has strong tastes of vanilla, but it seems to cloud the picture just a little to keep distracting me from the earthy tones of a classic BdG.

I like this beer, actually quite a lot, but it’s a notch away from a classic for me. Not too disheartened though, since a good BdG is a thing too often difficult to find in the USA, so I am grateful for this brew. In addition, for me, BdG’s are beers that can really take on a wide range of interpretations and still be both authentic and pleasing. For me, a beer that has combined some less than stellar individual attributes, into a drink that paradoxically seems to be more than the sum of its parts. 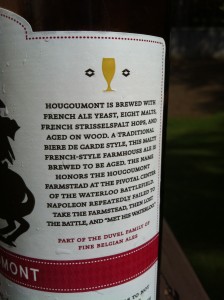 Ommegang seems to have managed to retain much of their class and original intent through various iterations of affiliation, so I commend them for that. They still stand as a beacon of US brewing, and generally produce beers of excellent value. This is no exception, if not their greatest effort.