I tried this in its initial incarnation back in March of 2010 in Raleigh at The Pit. I was impressed then (with The Pit and the beer), but did not write a review on that draft experience, so now this is a review of a 22 oz bottle purchased in Atlanta in July 2012. 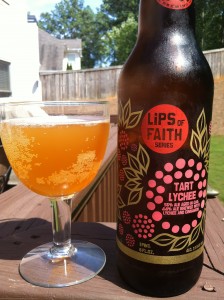 Pour is a fizzy, mid orange color with little retention of the head. A thin collar of foam persists at the very extremities of the surface and there are a few, spotty white patches that linger but not much. All in all, entirely appropriate.

Nose offers very little other than some feint citrus. There’s really not much here.

The lychee is definitely detectable, but as in the fruit itself, it is largely similar to a diluted orange or lemon presence. I am a BIG fan of lychee, ever since the time I was introduced to it as a desert in Chinese restaurants in England during the 1970’s, so it sits well with me. It’s also an excellent choice for a beer of this type, as it has a relatively neutral but potentially, clean tart angle to bring to the table.

Frankly I get almost zero cinnamon, and I’m glad! I could do without oaking as well, but again this doesn’t seem to manifest itself strongly.

The final pour is a bit soupy as the bottle conditioning yeast is poured in. 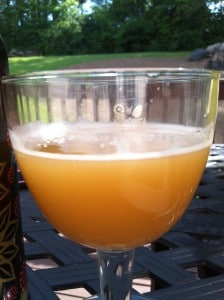 There’s no doubt that this beer is not quite as clean, sharp, tart or well-defined as it might be, and frankly that is its only downfall. It could be much sharper (which I would prefer), but it still drinks nicely. I seem to remember it being much more tart and sharp in March of 2010, but to be honest that could be my imagination.