I stopped in at Growlers on my arrival on Hilton Head Island, and saw they had this on tap. The guy was busy ‘educating’ me about, ‘how I’d better like sours’, before I stopped him in his tracks and bought something else. I was reluctant to pay for a growler fill when Lost Abbey has been so remarkably inconsistent over the years; boy am I glad that I did!

Fast forward to a few days later, and I get a chance to grab it on draft. I’m at Bombora’s Grille and the barman there starts telling me about Tart Lychee, and how he prefers it over Brett. I had the Lychee when it came out first, and really enjoyed it, so wasn’t to surprised that he didn’t feel Brett was quite as good. Unworried, I ordered the Brett and these were the results. 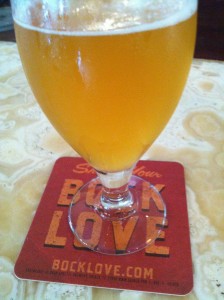 In a nutshell, perhaps one of the most disappointing beers I have tasted in quite some time.

The pour is not really what I was expecting, with a bright orange hue and some wispy, white head and lace. Quite ordinary to look at.

The nose offers a little citrus (NOT brett and NOT funk), and that’s about all you get in the taste. This is basically a Witbier without the coriander and orange elements! There’s almost no discernible tartness. It’s all well and good describing this as an ‘introduction to sours’, or an ‘accessible beer’, but frankly, that would be just a euphemism for ‘this beer is not a sour/wild at ALL’.

There’s certainly some fruit – pineapple does play a bit – but it lacks ester quality too.

Here’s the issue. If you put ‘Brett’ in the name of the beer, you ‘d better be delivering some significant brett character, and this does NOTHING. Sometimes, if there is a tart element that is too small in a beer that declares itself a Wild Ale or Sour, then I might cut the beer some slack IF we get some decent farmhouse funk and some horseblanket character. However this delivers nothing. In fact, it’s one of the most nondescript beers  one can imagine. It almost seems like a diluted Wit.

In the end, kind of rubbish. A nomansland beer, with a misleading name which would be (kindly) described as bland. Lost Abbey can be stunning brilliant, and woefully disappointing. This beer falls into the latter category. B-L-A-N-D.