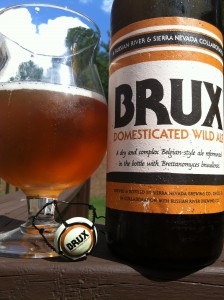 Mid to dark golden copper hue. Fizzy pour, resulting in no lace and virtually no head or retention. Cider-like in terms of its carbonation. The nucleation pattern provided by the Duvel glass is an interesting one, and one that I don’t recall seeing before. @Craft_Suds says that he has seen a similar pattern with Dark Horse beers, but after a couple of decades of using this glass I’ve never seen anything like it. – (click on the picture below to see the 20 sec. video). 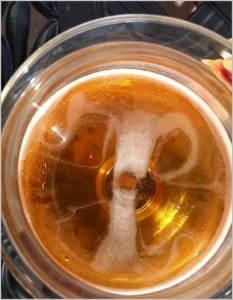 Nose offers some really rich, strong and delightful hay and grass. Very nice, and a real feature of this beer, it’s rich and well developed.

Tastes are also reminiscent of a cider. Quite dry, and with plenty of funk and a tiny bit of tartness – not much. Obviously this has time to develop somewhat. There’s a touch of lactic acid, along with plenty of green apples that have been tainted with tannins from grape skins. That combo bring the dry character over and over again. The alcohol pushes through a little, but it’s never harsh. 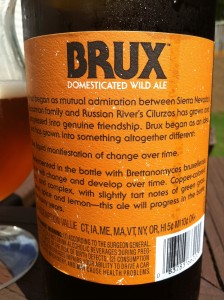 The Belgian influence seems to come in terms of the yeast. although we never get a strong presence – at least not this young. Don’t look for a ‘Belgian Style’ beer (at least not yet). Currently this resides somewhere between dry cider and neutral, TEMPERED Lambic. It’s not sour – just dry, and it’s not exceptionally funky either, but this beer has a real chance to become something quite different IMO.

This is already a HUGELY drinkable beer, and my suspicion is it will get better.  The idea that it should be aged has been WILDLY promoted by anyone writing about this beer, and I suspect that is because it says precisely that on the label, and people immediately jump on the bandwagon in a mindless manner. Having said that, the beer will certainly change significantly over time, but whether it will actually get better, I think is HIGHLY debatable – highly.

As it warms things change. More yeast character and the cider elements recede a bit. The label suggests ‘dry and complex’ and I would largely agree. Regular readers will know that you have to earn that with me!