Very light, straw colored pour. Actually the beer is incredibly pale, almost to macro, low quality standards. Not necessarily an issue, but it really isn’t the best looking pilsner that I’ve seen by quite some distance. The hue is certainly not the most important part of the beer, but there is lack of depth here that subconsciously starts to say ‘macro’ which is not helping my mind. Not the end of the world, but I would take comfort with more gold and pale less straw! 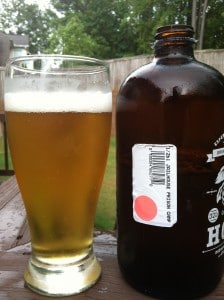 Nose is also a touch lackluster as well, and fails to offer any definition or potential bitterness.

On the plus side this is NOT sweet (so it lacks the potential vegetal element that would be a disaster), but it doesn’t impress. On the downside it lacks a really serious Saaz/Noble like bitter snap that I look for in pilsners.

Mouthfeel is OK, but it feels slightly under-carbonated to me. Almost CERTAINLY a function of the fact it is a growler and was filled a few hours ago. As a result of the carbonation issue, the head is not well-retained, nor is there much lace. Drinkability is OK, but because of the lack of noble snap, I think this beer would appeal to the BMC crowd just a little too much, and perhaps not for the best reasons.

When I started this review, I originally wrote the following; “Everyone knows I have enormous admiration for Glenn and his beer. This is nowhere near his best, and not by some distance.” After a quick Twitter exchange, I learned that Glenn was not responsible for this beer, rather it was brewed by the Jailhouse ‘inmates’, who I assume are a bunch of people that hang out/work/volunteer down in Hampton. Frankly, it shows a bit.

I think I want Glenn at the helm.