Interesting bottle that reminds me a little of the Australian stubbies.

Pour is a mid-orange color with a huge, ice-cream like head. The retention is superb, leaving a thick and creamy head the whole way down the beer, but the lace is surprisingly scant when considering the initial fluff. The carbonation seems high, but the beer settles quickly and the mouthfeel is a lot smoother than I was initially anticipating given the liveliness of the beer right out of the gate. 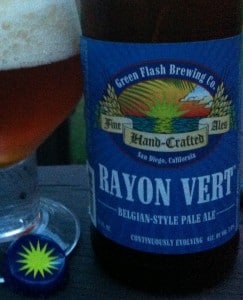 The nose is very, very funky – a LOT of lemon based soap. Very soapy indeed and very pungent – great stuff.

The tastes are a beautiful reflection of the nose. The funk fades slightly to give a lovely, smooth bitterness once again repeating the soap element. The soapy tastes remind me a little of a John Courage Best bitter from back in the 80’s, and there is a definite IPA/grapefruit element for me. Less estery fruit, more drying yeast. The funk lingers, and finds its way into the back end of the beer and aftertaste, with a sharp grapefruit element. There’s also quite a lot of lemon in there too, but the fruit is continually challenged by the funk; over and over again it reminds you that it is present. 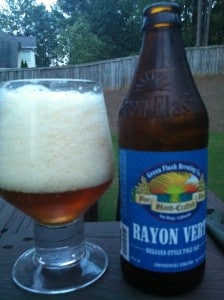 To me the yeast is not the feature here. It’s really the other citrusy and funk elements that combine so well to give the soap character. This is actually a very floral beer when all is said and done. Almost a lavender presence, and it’s quite potent. The 7.0% ABV is very well hidden.

I think this would be much better labeled as ‘Belgian IPA’, so the only real fault I find is on the label, as the beer is described as a ‘Belgian Style Pale Ale’. I get much more bitter IPA elements than that would suggest, and the beer swings away from pure funk into some more bitter areas.

Super little beer that I enjoyed a great deal.