Jester King is a brewery that I have been monitoring carefully over recent months (even though I’m not crazy about the use of the word ‘craft’ in their name). Several people have mentioned them in a number of contexts that interest me (low(er) ABV, interesting yeast strains, Farmhouse styles), so I have been watching with interest. Not quite my first opportunity to try them, but my first concerted, concentrated review.

I’ve largely giving up trading over the last two years, since I feel that I can get plenty of good beer locally without the associated extra cost, plus the fact that the beer that is often so anticipated it seems to constantly disappoint me when it actually arrives. As such, a recent visit to Houston afforded me the opportunity to pick some up, along with some help from @lnashsig – thanks, Lee!

Noble King comes in the 750 mL, wine-like, dimpled bottom bottle, and like all of the Jester King beers it sports an elaborate, fantasy style, shiny, impressive label. Lots of information on the label, too (although they seem to have little appreciation of what a great monarchy can offer a country (like not having a politician as head of state, representing you abroad)). Anyway….. 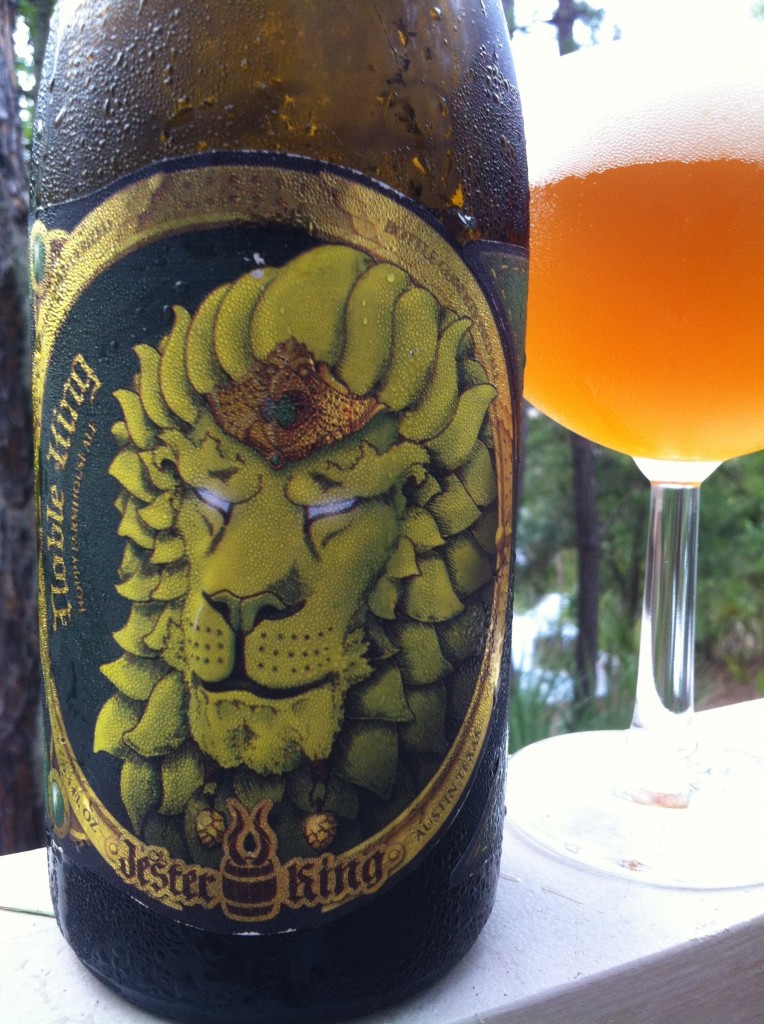 The beer pours an absolutely beautiful, honey-orange color with some of the best, rich, well retained head I have seen a long time. Lace is first class. The beer could not LOOK any better.

There is a relatively large, hoppy nose too. I say ‘large’ because I am surprised by the power, given the relatively modest ABV. Very fragrant, and it actually exudes a touch of floral quality as well; a bit pils-like. The yeast is more advanced in the nose than the tastes, which for me is a shame.

The bottle-conditioning is immediately evident, which the carbonation being VERY lively. The carbon dioxide really livens up the beer and adds a great, spritzy feel. This combines beautifully with the richness of the head, to give a significantly, satisfying mouthfeel. Very rich.

The tastes are interesting. At first there is a typical, light, farmhouse funk, along with a nice Noble, hoppy briskness about the beer. However, as it warms and over the course of the bottle, there is a distinct change. The beer takes on a more earthy element, and although it never gets really strong, for me it does slightly detract from the flavor profile. I prefer a sharper, more well-defined edge, and I think it loses a bit. Don’t get me wrong, the beer still tastes very good, I really enjoyed it, and I would definitely recommend it, but it went from world class down to the next level for me in the taste department.

Despite the turn, it remains punchy which is a testament to the quality of the beer.

An interesting beer that has elements of Pilsners, Saisons. Belgian Pales and even American hop-forward beers, and if I’m honest I would prefer some sharper definition in terms of style, but it still tastes good and I feel that it works, despite the slight confusion.

In a nutshell, this is a super beer, VERY tasty, one which could provoke conversation, and it makes me excited to try more from them. Modest ABV makes such a nice change in the USA, too.