I am assuming that this is a re-birth of the Crank Tank Rye’d Ale from the fall of 2010 (I’ve included my review of the 22 oz bottles of that, at the end of this review).

I’ve got to be honest right off the bat here, I generally do NOT like rye beers. The harsh, bitter, peppery notes that the spice delivers is usually not to my taste at all, and their brash nature seldom sits well with me. Having said that, this I quite enjoyed. How so?

For a start the beer looks good. There’s an attractive, golden pour with a well, carbonated, ‘fresh’ look about it. Lively and vibrant in the glass, the white head contrasts nicely with the shimmering body. The beer leaves some lingering head and some better than average lace. 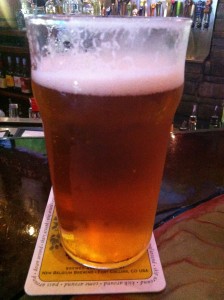 The nose and tastes do NOT bring a big barrage of rye. This is much more important in the tastes for me, since a bitter, dry and pepper assault on my taste buds is not welcome when it comes to rye beers. Of course there is a decent bitterness about the beer, but to me it feels much more like an American hop element than anything brought specifically by the rye.

There’s a decent malt presence too, and the combination of the lack of specific rye pepper and the sweetness in the background produces a beer for me that is much more like a traditional, American IPA than anything else. To be fair, Sweetwater IS calling this LowRYEder ‘IPA’, so I suppose they’ve got the beer right!

A nice, smooth creaminess in the mouth, again likely as a result of the rye element.

In short, I enjoyed it a LOT more than I thought I would. It drinks easily, fresh and cleanly, and those attributes give the beer a crisp and bright feel. There are some sharp lines around the beer and the rye frames the hop bitterness nicely. This is somewhat unusual I feel, as for me the rye takes a back seat and the beer is better for it. Well defined and brisk. Tasty, and welcome in the warm Atlanta summer that is cranking up.

Had this a few times in the last few weeks, this review is for the final 22 oz bottle that I will drink.

Pour is a rich looking, clear orange with some good carbonation and head and lace to match. The lace is pretty sticky. Looks solid in the glass and almost has the look of a fine Belgian Tripel.

The nose delivers the typical spicy rye notes but it is pretty restrained and much less intense than many others that use the grain. The tastes reflect the nose and its light touch as well. The beer is sweeter than many rye beers that I recall, and the malts shine through against the notoriously difficult to suppress rye elements. Not too much bitterness at all. The rye adds a creamy elements that fills out the beer somewhat. There is a substantial feel about the mouthfeel which is a combination of the tastes and a fine carbonation.

I’m just not a huge fan of rye in beer, so that’s the context of this review, but this is somewhat milder than most and I like it better than nearly all of the other rye beers that I recall. I’m never going to be a “fan” as such, but the beer is definitely one of my favorite interpretations of the style, even if I’m not in love with it.