Opened on the occasion of Her Majesty The Queen’s, Diamond Jubilee.

Brewed in 1997 as part of the celebration surrounding Gale’s 150th Anniversary and their first royal visit, the beer was distributed for the year 2000. I purchased this imported bottle a few years ago at Green’s on Ponce in Atlanta, GA, USA. 275 mL, gold foil on the neck and corked.

Cork is still hydrated and eases out with a decent pop – good sign. 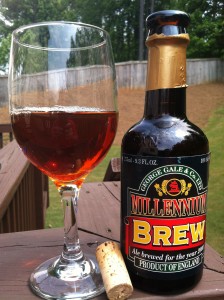 Pour is a still as a mill pond and has the appearance of a medium steeped tea. Beautiful clarity. It doesn’t quite have the solvent alcohol legs that I was expecting.

Nose is quite cider like, but again does not quite give the sweet presence that I was expecting.

There’s obviously a very large vinous element to this, and we are talking about a semi-dry red. There are some tannins in the back end that dry the palate a little, but it’s not too debilitating. Some definite tea-like character all the way through, and a little warming alcohol in the back end. No hint of sweetness at all.

There is a slightly sour, apple based element to this which I suppose could be a sign of some ethanol being oxidized up to ethanoic acid, but to be honest there is no detection of the cardboard notes that usually accompany such a REDOX process. The beer remains clean, in as much as the flavors are still well-defined and not muddied at all. Sharp (as in clean, not abrasive), mild-vinegar ending. Zero hint of the 10% ABV. There’s some dry, black grape skins in there as well, that add to the tannin element. 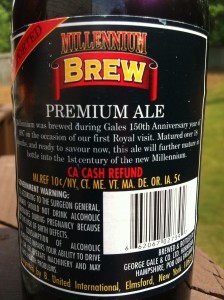 Despite the sour quality, this remains incredibly smooth and really quite drinkable. Incredibly light, and no harsh solvent alcohol at ALL. It’s turned into a really, dramatically light, slightly sour, mildly puckering, slightly peaty but dry, digestif. It’s a hugely complex beer with a lot going on and I would imagine that lots of people will not be able to appreciate or understand it, but for me it’s still producing an amazing (if different) experience, as it did many years ago. 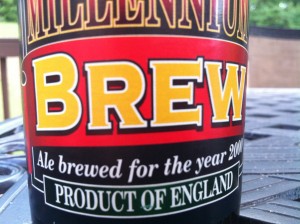 Beer that drinks like wine, but still classy even if probably slightly over the hill at this stage – not unlike myself!