$2.99 from Trader Joe’s who market and distribute the Mission St. beers. The range is brewed by Steinhaus, which are owned by Firestone Walker – this is a complicated arrangement! Apparently this is a blend of three different beers. 22 oz bottle with a black, plastic covered cap.

Pour is a chestnut body with a modest, mocha colored head. A little lace and not much retention. Some spotty, very thin film but not much going on here. 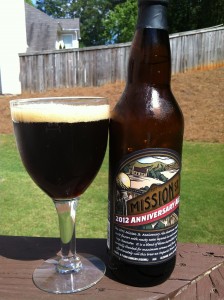 The nose is chiefly solvent alcohol, but there is a nutty, malty backdrop, too. As it warms the nose gets a little less alcoholic and pushes forward a few liquor notes – it’s better after a few minutes.A slightly chocolate based malt note dominates up front, but as in the nose the alcohol play s a part. It’s quite prevalent and along with a little prickly carbonation, leads to a sting that I wasn’t anticipating. There’s quite a lot going on here with a touch of caramel nuttiness.

The mouthfeel is certainly not the strength of this beer, and to be honest it’s a little edgy with the alcohol penetrating quite a lot. The solvent nature of the alcohol has the effect of accentuating the fairly thin body, and taken as a whole the beer doesn’t really take any prisoners. 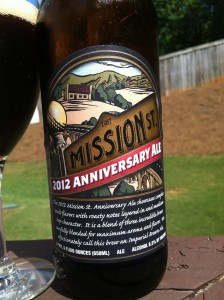 A beer that is really an Imperial Brown Ale, but the alcohol is not well hidden by any round, creamy, sugar malts quite as well as others in the style. As a result the beer feels a bit too aggressive for the moniker, and begins to sit in American Strong ale country.

In the final analysis this is a bit of a ‘miss’ for me, but I could see that with some edges being taken off and the alcohol being turned down, how I could grow to enjoy this a little more. As a result, this might be a really interesting cellar candidate. Cheap, so low risk, and I’d be surprised if time were not kind to this.