22 oz bottle, another Trader Joe’s, el cheapo offering. I’ve had mixed success with these beers, so there’s always a bit of a lottery involved but this is a Minhas beer, so the omens are not exactly good!

Copper pour with a small head. There is a fairly small amount of lace, and the head breaks up over the top of the body. Looks OK. 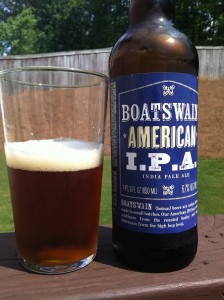 Nose is of some musty hops against a fairly solid malt backdrop.

Tastes start with some of the metallic bitterness that one would hope for, but this quickly turns quite an abrupt corner. We get a general staleness first, followed by a strange plastic element and finishing with some tobacco bitterness. There’s a dull grapefruit element to it, and a malty finish. There’s also quite a large dose of solvent alcohol splashing around in the background. Lingering bitter, dry aftertaste.

In the end I suppose you get what you pay for. This IS a beer that fits the American IPA style for me, but unfortunately it is also a beer which fits the budget beer category that it is, as well. It’s not absolutely terrible, but it’s not very good either. It grows on me a bit, but not much. If you don’t try you’ll never know, but there’s really no need to buy and drink this with so many better options out there.