OK, here we go with another Dogfish Head experiment. The second one, Noble Rot being the first, that I have tried in their newly designed bottles.

Brown, slightly garnet colored pour with a thin, smooth, nitro-like mocha head sitting atop the beer. Very little lace. Much more clarity and cleanliness than a traditional Belgian Dubbel and it looks better than I was expecting (my dislike of the Dubbel usual appearance is well documented).

The nose is interesting. Light, Belgian candy and spice and some floral sweetness. A little honey that manifests itself even more in the tastes. Brown sugar with a touch of burned molasses as well. 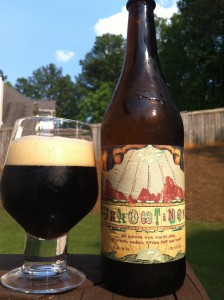 Increasing waves of licorice and arrowroot based spice come over the palate with a little mace. A pleasing, gentle, spicy, pepper based, light licorice element. It’s almost like a peppermint character is underlying. Yeast element increases with temperature, as does the creamy nature of the beer. Herbal bitterness and general spice increases over time as the accumulation mounts. I don’t really get much chocolate flavor at all (a good thing). 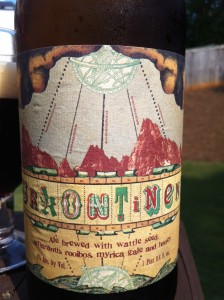 For quite some time I was trying to place a taste that kept coming around. It was a taste that I was very familiar with, but for some reason one that I could not put my finger on. After quite a lot of thought I realized that it was nothing more than the typical, Christmas-like, spruce, spice elements that one finds in beers like Sweetwater’s Festive Ale or that one might get in an Anchor’s OSA. It’s odd that it took me so long to place the taste, but I think it was a function of drinking this in 85 degree, bright sunshine and therefore being somewhat of a disconnect from the beers and the time of year that usually is associated with those elements. Odd. The combination of the wattleseed, amaranth, rooibos, and myrica gale, combine to give that unmistakable piney, Christmas feel to the beer. The wattleseed has been seen before in this Barons beer, but the other elements are new to me.

This is miles away from a traditional Dubbel and much, much closer to a Belgian Strong Dark with extra spices. It’s delicious, and the type of thing that Dogfish Head does so tremendously well. When they get it right, they REALLY get it right. Of course, the other side of that coin also exists!