If the truth be known, I didn’t like this much when I first tasted it, immediately after it came out, but thought it might be a beer that could change quite quickly, so I put one aside and am now trying it a few months down the road.

This time the nose on the beer seems stronger than I remember it. I mention this before I make any references to the pour, for the simple reason that the aroma reaches my nose before I’ve even dispensed any from the bottle. It’s an enticing combination of fruit and grapefruit and really is quite strong. When the beer eventually gets out of the bottle and into the glass, there’s a much bigger malt presence on the aroma than anything else, and on warming, some the alcohol starts to penetrate quite directly as well. All in all it’s a fairly strange beast to pin down on the aroma front.

The pour offers a pretty basic, competent copper color, a little chill haze, a small head without retention or lace, and some livelier carbonation than I was expecting. 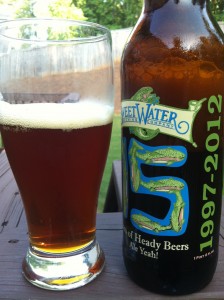 The tastes are interesting. There’s a definite underlying malt presence that takes the beer a LONG way away from a classic American Barleywine. However, the sweetness and malt doesn’t get ANYWHERE CLOSE to an English Barleywine either. The sweetness gives away the old, ESB malt base, but let’s be clear, this ain’t no ESB. The beer is muddled and vegetal in some ways.

Ultimately this is a beer which falls between three (or maybe four) stools. It has an alcohol content consistent with a barleywine of both English and American genres, but it does NOT have the hop presence of an American Barleywine and does NOT have the full, syrupy sweetness associated with many English versions. It does have a hefty malt presence, but it is nowhere near biscuity enough to be classified as an ESB (and in any case the alcohol content takes it way out of that category anyway). I’m tempted to say American Strong Ale for a moment, but a few seconds of reflection makes it obvious that the hoppy and bitter elements are not there, and it is just not nearly aggressive enough, either.

Sweetwater has brewed a beer that is difficult to categorize, which of course, is an American penchant, but for me epitomizes most things that are wrong with American beer. I find it frustrating, non-descript and forgettable which was probably NOT their intention, and at the end of the day the beer seems to collectively be a lot less than the sum of its parts should suggest – annoying and disappointing. Either way we get a beer that doesn’t really showcase any particular aspect of a mish-mask of styles, and as a result falls really short of being the milestone, memorable beer that it really should be. A shame and a beer in no-mans-land for me.