This is a ruse, right?? It’s Yuengling, marketed by Rolling Rock, surely??

Even if that’s not the case, in a nutshell, this is still Yuengling. I’m generally not in the habit of dismissing beers with such an apparent lack of reflection and thought, but that was my first thought, and nearly 25 minutes later and 12 oz down, I can’t think of anything else.

A non-descript, straightforward copper color, with a woefully disappointing head and level of retention. Semi-sweet grains dominate the nose and the tastes, against a fairly thin mouthfeel, all followed by a bitter sweet finish and lingering aftertaste. Some, not-too-unpleasant, very light, sugary, caramel malts do come through but they are very thin on the palate. There’s a little yeastiness about the tastes too, but in a generic, lager-like manner. Sitting here right now, I find it difficult to believe that I would be able to tell it apart from Yuengling in a blind test. 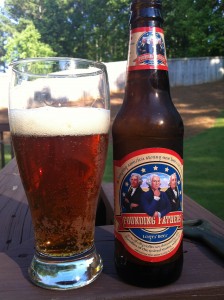 I’m always troubled and very wary of any beer that appears to place a philosophy and a marketing strategy before all else, and in particular ahead of the stuff inside the bottle, and this is a pretty strong example of such a thing. This brings with it a pretty simple and predictable outcome that one might expect. It’s bland (if non-offensive), lifeless (if not exactly flat) and 100% forgettable (if not exactly horrid). A beer for either the tunnel vision American patriots, macro drinkers, or perhaps Yuengling lovers. 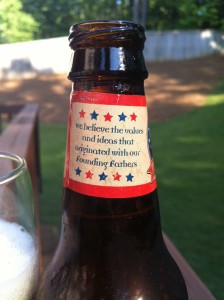 Apparently Founding Fathers Brewing Co. has an address in Latrobe, PA which of course means Rolling Rock to most folk, and to be honest this is a beer in the same class as that particular, ahem…..gem. In fact, Founding Fathers Lager Beer is so ‘macro’ in almost every respect, it has me thinking that it might well be a stealth (pseudo) craft much like the Blue Moon brand. Apparently there is a ‘Light’ version of this, too. Can’t wait! 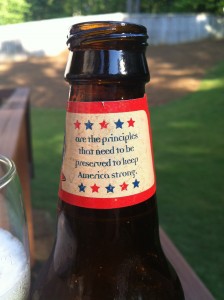 If you like Yuengling, you’ll most likely enjoy this too.