From notes. Purchased as a 12 oz single form the beer store a few miles north of the Dogfish Head brewpub (Atlantic Liquors?) in Rehoboth Beach, DE. Anyway, interested to try this. Apparently so-named because it will appear ‘between’ their other ‘seasonal’ production runs. 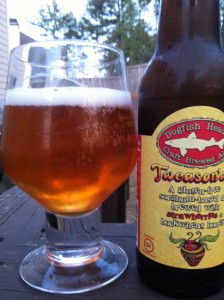 Pour is a really, shiny, polished copper affair with a small head. There’s no doubt that the head and lack of retention is a little disappointing, but to be honest this is to be expected with the grain bill used here. As a result, I won’t hold that against the beer.I bought this on the same day that I visited the brewpub, and consumed it a few days after. I was joined at the brewpub by @MattUD and he and I talked about this beer. He is a local and he commented that the first batch of this that appeared at the brewpub was unbelievably strong on the strawberry front. I speculated that it would be dumbed-down for the bottled version, and given his vivid description of the original batch(es) it seems as though I was right. Having said that, the strawberry (or at lest the ‘berry’ element), is still quite forward and noticeable.

I liked the cleanliness of the beer and the non-fussy nature of it. It was refreshing, and simple without ever being especially ‘fruity’ as such, and there are clean, well-defined lines, and a little tart, lemongrass feel about it. In a strange way it may be that the malt bill here actually helps the beer to be very straightforward. Some mild sweetness, and some bready/biscuit elements come from somewhere, but it’s mild. The honey is not a big element for me, apart from (bizarrely) in the color. Quenches quite nicely, and gives a semi-sweet finish and light aftertaste.

All in all, quite tasty and an interesting beer for a spring day. I’m not sure I’d want to drink more than a four pack in a year, but nevertheless a beer that I enjoyed.